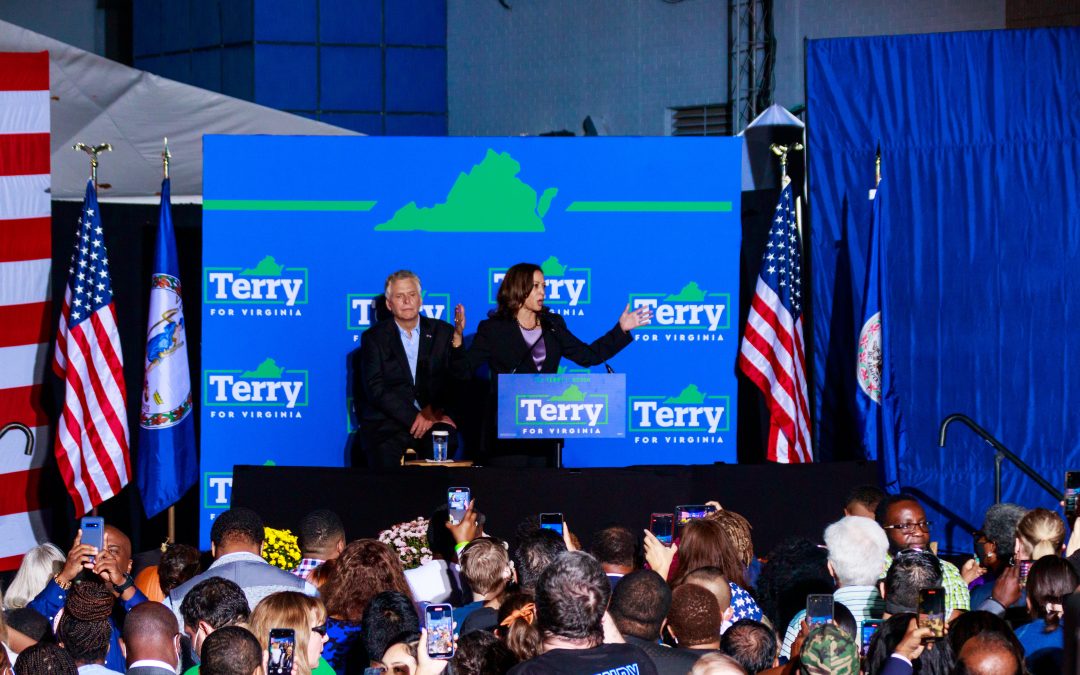 Vice President Kamala Harris told a crowd of several hundred Thursday at a rally for Virginia gubernatorial candidate Terry McAuliffe that electing the former Democratic governor would help ensure that Virginia does not restrict access to abortions.

“Don’t Texas Virginia,” she said, referring to Texas Gov. Greg Abbott’s decision to sign a law restricting access to abortion in that state earlier this year. “We don’t have to imagine – this is the power of a governor.”

Before Harris took the stage, McAuliffe also told the crowd he supports a woman’s right to have an abortion.

Thursday’s rally appeared to be part of an effort by the campaign to reach voters of color. With 11 days until the Nov. 2 election in an increasingly tightening governor’s race between McAuliffe, the Democratic former governor, and Republican Glenn Youngkin, a former business executive, Harris was the latest of three prominent African American women to campaign for McAuliffe in recent weeks. Voting rights advocate Stacey Abrams and Atlanta Mayor Keisha Lance Bottoms campaigned for McAuliffe last week.

Several hundred attendees turned out for McAuliffe and Harris at a closed-down fire department in Dumfries, Virginia, a town of 5,000. Parents raised their kids above their heads to get a look at America’s first Black and woman vice president as Harris stepped onstage with the sun setting behind her on the warm evening.

Penny Toney said that this was the first time a gubernatorial candidate has held an event in Dumfries, where she has lived for 24 years.

Several voters at the rally said that campaigning in Prince Williams County is a good way for McAuliffe to reach Black voters. Dumfries is in Prince William County, the most diverse county in Virginia, according to the 2020 census, with over 50% of citizens identifying as Black, Latino/Hispanic, or Asian American Pacific Islander.

“These events matter,” said Casey Barrett, who recently lost his job and supports McAuliffe’s jobs plan. “[The politicians] should come here outside of election time, too.”

Harris said governors matter “when you’re talking about workers’ rights” and whether, during a pandemic, people “have paid sick leave and paid family leave.”

“What we do every day will matter….” Harris said. “We are here right now to make sure Terry McAuliffe is elected governor of Virginia.”

Harris recalled the late Rep. John Lewis, a longtime civil rights advocate, who advised activists to get in “good trouble.”

Black voters overwhelmingly supported McAuliffe when he successfully ran for governor in 2013. To bolster McAuliffe’s appeal to Black voters again this cycle, he visited Black churches and hosted rallies with Abrams and Bottoms, as part of his “Souls to the Polls” campaign effort. Other prominent Democrats scheduled to campaign with McAuliffe include former President Barack Obama on Saturday, and President Joe Biden on Tuesday.

Although Biden won Virginia by 10 percentage points in 2020, Republican gains in the state are making Democrats nervous. The Virginia gubernatorial race may be an early sign of how voters feel about Biden’s first year in office, and how people will vote in the 2022 midterms.