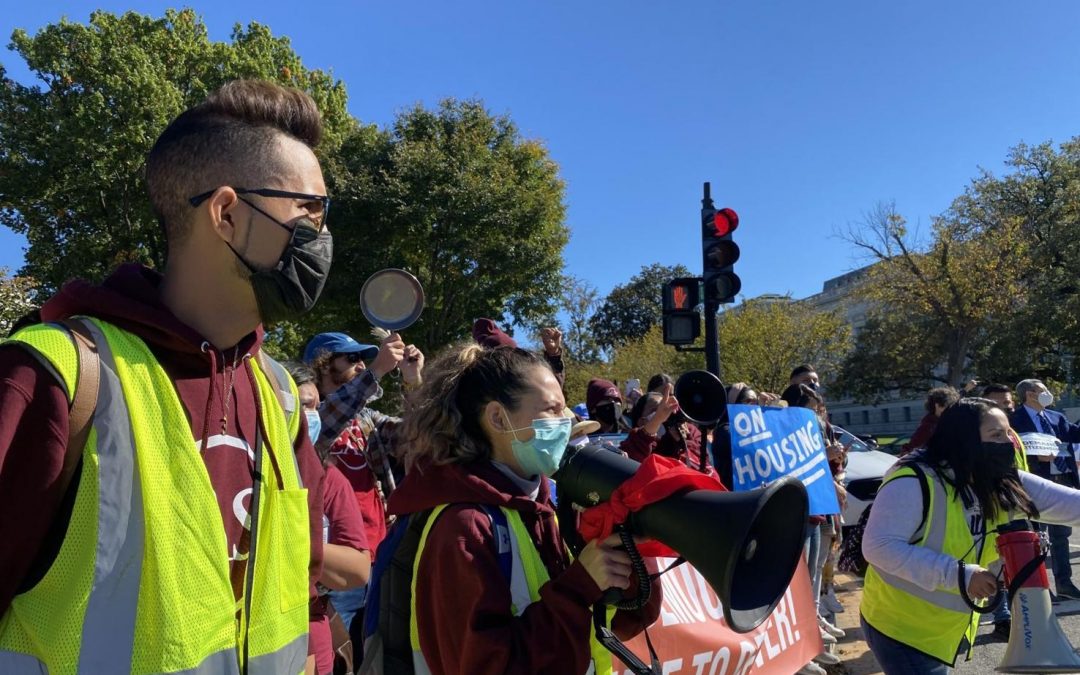 CASA organizers lead chants. Hundreds of protesters from over 20 organizations nationwide convened in Folger Park before marching to the Capitol. (Henry Rogers/MNS)

WASHINGTON — Two Maryland candidates for public office were among 30 demonstrators arrested outside the Capitol building Wednesday as hundreds rallied to demand that Congress pass the Biden administration’s Build Back Better plan with provisions including immigration protections, climate action and increased health care.

Following her arrest, Kristin Mink, a Democratic candidate for Montgomery County Council, underlined the urgency of the social issues that demonstrators want addressed by the massive spending plan, which now stands at about $2 trillion in negotiations.

“We are on the verge of passing what could and should be the biggest expansion to our social safety net in recent history,” she said. “Millions are suffering following the pandemic—which we’re still in the midst of—and it’s highlighted and exacerbated a lot of needs.”

Demonstrators from more than 20 advocacy groups, including climate advocacy group Sunrise Movement Tempe and CASA, the largest immigrant advocacy group in the Mid-Atlantic, marched to the Capitol from a nearby park to highlight the interconnectedness of climate change, immigration, health care and other social issues, said Gabriela Roque, a Frederick native who now works as CASA’s lead organizer in Maryland.

“Biden talked about the Build Back Better plan being a way to address racial inequalities, to recognize the sacrifices that were made largely by working class people [during the pandemic],” Roque said. “But unfortunately, after months of debate, there is still talk about limiting or cutting or not even including some of these policies that are important to us.”

Charles Ndikintum, a CASA member from Hagerstown who is originally from Cameroon, said Biden’s proposed paths to citizenship are urgently needed to protect undocumented people and urged lawmakers to have “courage” to pass the legislation.

Several protesters from Maryland pointed to torrential rains and flooding as major issues that have forced residents to grapple with climate change firsthand and would be addressed in the Build Back Better plan.

“There are many people that thought we weren’t going to see dramatic effects of climate change in places like Maryland for quite some time—now we’re all seeing it,” Mink said. “We cannot afford to wait another year.”

Although climate change is often thought of as a federal issue, there are a number of things that can be done at the local level, Mink said. Without a comprehensive approach—which the Build

Back Better plan would enable—we can’t move towards developing communities that can withstand the climate emergency, she added.

“We can’t legislate in silos anymore,” said Ashanti Martinez, a candidate for Maryland House of Delegates in District 22. “[Issues addressed by the Build Back Better plan] all are so intimately connected with our environment.”