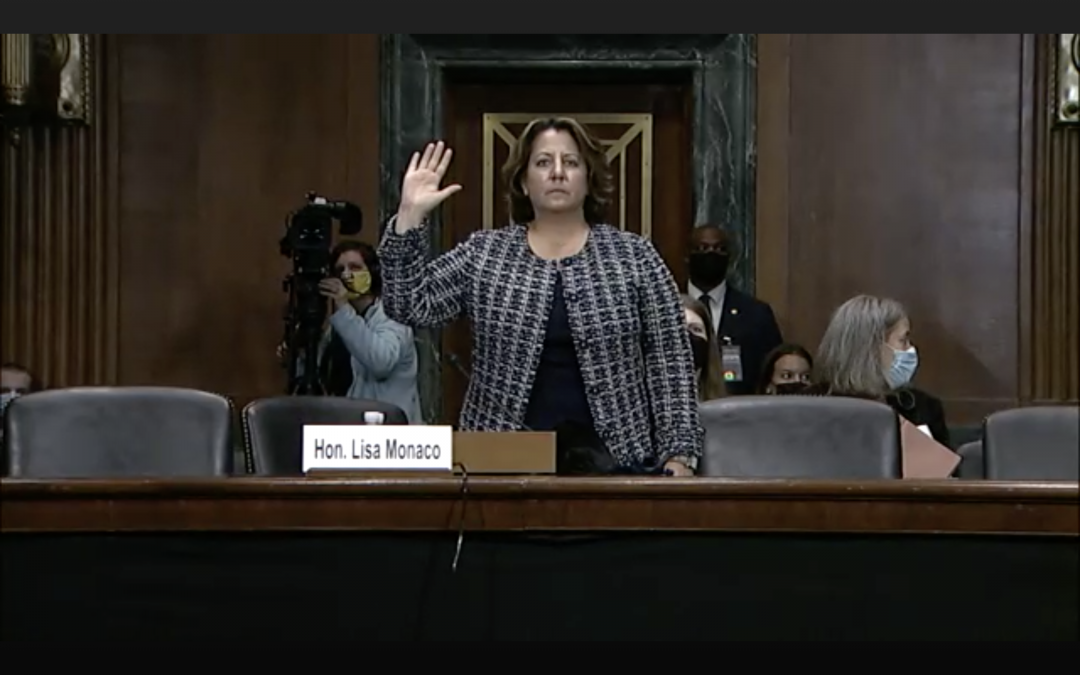 Deputy Attorney General Lisa O. Monaco testifies before the Senate Committee on the Judiciary Tuesday morning, which is examining the effectiveness of the Violence Against Women Act (Courtesy of the Senate Judiciary Committee).

WASHINGTON – Deputy Attorney General Lisa O. Monaco told a Senate hearing Tuesday that the pandemic has exacerbated the increased demand for services for survivors of sexual violence as senators consider a bill to strengthen and renew the Violence Against Women Act.

“The demand for services is outpacing the ability to provide these services, and it’s only become more so as a result of the COVID-19 pandemic [because] people are at home and really with their abuser in many respects, and that is a horrible situation we need to rectify,” Monaco said at the Senate Judiciary Committee hearing.

The Biden administration supports renewing the law, which expired nearly three years ago although Congress continued to fund it, and wants to increase the funding, Monaco said. The extra money could be used, for example, to reduce long waiting lines at VAWA-funded rape crisis centers across the country, she said.

The bill would reauthorize existing VAWA programs to combat domestic violence, sexual assault, dating violence and stalking through 2026. It also would expand the programs, strengthen federal gun restriction laws for abusers and further housing and economic security for survivors.

Since its initial enactment in 1994, VAWA has been renewed three times. In March, the House passed the bill with 29 Republican votes in a show of bipartisan support.

At the start of the hearing, three Republican senators who are not committee members, Joni Ernst, R-Iowa, Shelley Capito, R-W.Va., and Cindy Hyde-Smith, R- Miss., spoke to the impact the act has had on protecting women for years. The senators stressed the need to protect underrepresented and underserved survivors of domestic violence, including those in rural, tribal and indigenous communities.

Sen. Amy Klobuchar, D-Minn., made the case for closing the “boyfriend loophole” by updating the law to protect dating partners in the same way as married partners. While domestic abusers are prohibited from having guns if they lived with, were married to or had a child with the victim, dating partners are not subject to those laws.

“Women are more likely to be killed if the abuser has a gun, and it’s no different if that abuser is in a dating relationship than if they are a spouse,” Monaco said in agreement. That same notion was reinforced by Sen. Chris Coons, D-Del., who stressed the need for information-sharing between the federal government and state local authorities regarding background checks.

Sen. John Cornyn, R-Texas, criticized Monaco for not showing up during a previous Senate hearing on the FBI’s failure to investigate sexual abuse claims against Larry Nassar, who served as the U.S. women’s national gymnastics team doctor.

Republican Sens. Josh Hawley and Tom Cotton tried to derail the hearing away from VAWA by focusing on Attorney General Merrick Garland’s Monday memorandum that called on the FBI and U.S. Attorney’s offices to address violent threats against teachers and school officials following a request made by the National School Boards Association.

Senate Majority Whip Dick Durbin, D-Ill, who chairs the committee, said he wants to move quickly. “We need to get this bill to a president who is anxious to receive it [and] sign it into law for reauthorization.”