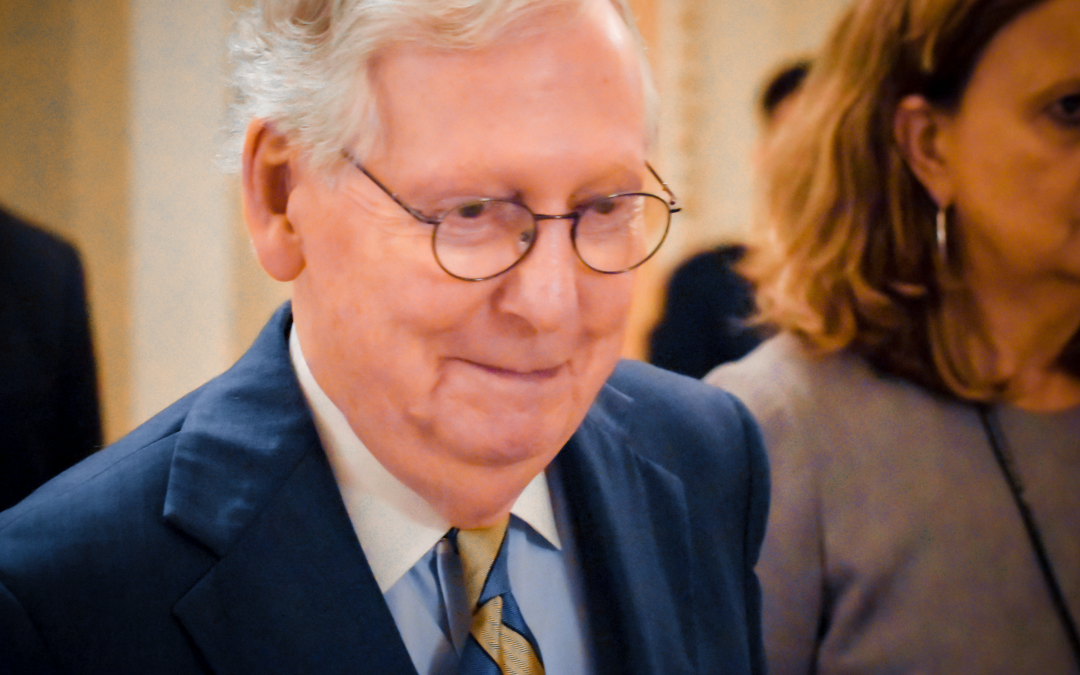 Senate Minority Leader Mitch McConnell lets out a smile this past Wednesday as he moves through a crowd of reporters. McConnell is one of several Republicans in past weeks to beat back Biden's agenda with the threat of inflation. (Dan Hu/MNS)

WASHINGTON — The latest consumer price report from the Bureau of Labor Statistics showed an increase in costs of 5.4% over the past year, the highest annualized inflation rate in more than a decade. The post-pandemic inflation presents a political dilemma for President Biden and a powerful messaging tool for Republicans.

According to minutes from the most recent meeting of the Federal Open Market Committee, which sets monetary policy for the Federal Reserve, the current inflation is “boosted by a surge in demand as the economy reopened further, along with the effects of production bottlenecks and supply constraints.”

The Federal Reserve remains set on the idea that it is “transitory,” meaning it’s a temporary condition resulting from unique post-pandemic economic conditions. The minutes noted that, while a gradual tightening of monetary policy will begin shortly, the nation’s top economists “aim to achieve inflation moderately above 2% for some time so that inflation averages 2% over time.”

Inflation has factored heavily in recent Republican criticisms of the Biden administration. The party line has been repeated by countless lawmakers over the past weeks, exemplified by South Dakota Republican Sen. John Barrasso’s speech on the Senate floor last week that Americans are “already feeling the big bite of Joe Biden’s inflation at the gas pump and the grocery store.”

Wednesday’s report showed an increase of 0.4% in costs over September, driven in part by a 0.9% increase in food costs — meat and eggs, especially — and a 1.2% increase in energy costs. Annualized inflation rates for food and energy are 4.6% and 24.8%, respectively, although the energy hike is mainly due to artificially low oil prices last year.

Hours after the inflation report was released, Republicans ramped up their messaging against both Biden’s governance to date and the expansive reconciliation bill that represents much of his agenda.

“Prices are rising because Democrats spent trillions of dollars we don’t have on a socialist giveaway,” read a statement by National Republican Congressional Committee spokesman Mike Berg. “It’s completely reckless that they are now trying to spend trillions more on another massive tax and spending bill.”

For Democrats, the strategy seems to be waiting for consumer prices to die down. The organizations responsible for electing Democrats to the House and Senate have been silent on inflation, instead focusing on low unemployment claims, fund-raising successes and GOP obstinance over the debt ceiling vote.

If monthly inflation reports continue showing less-than-favorable numbers, however, that may no longer be an option. Jonathan Bydlak, director of the Governance Program at the conservative R Street Institute, said the possibility of losing competitive districts in 2022 over inflation could deepen divisions between the progressive and moderate wings of the Democratic Party and imperil the reconciliation bill.

“It’s easy to be in favor of all these things when there’s no apparent impact on the economic well-being of Americans,” Bydlak said. “But as soon as [House moderates] look and think they may be in trouble electorally, it’s not implausible to see perhaps a rethinking of priorities.”

One messaging possibility for Democrats if inflation becomes a salient issue in the midterm elections could be placing the blame on former President Donald Trump. But, Bydlak pointed out, that strategy has its downsides.

“Theoretically, [Democrats] do have somewhat of an out, they could basically say, ‘This is Trump-flation,’” Bydlak said. “But they can’t really do that because they have the progressive part of the party that wants to see even larger amounts of spending.”

Another messaging possibility for Democrats is a bit more counterintuitive.

J.W. Mason, an assistant professor of economics at John Jay College, is among those who believe that the current inflation spike is temporary. He says those using current inflation trends as a sign that there has been too much federal spending are “either confused or deliberately dishonest.”

As for solutions, Mason is trying to sell a progressive fix, arguing the solution is an increase in government spending. One example he gives is combating the current vulnerability to global oil prices with investments in alternative energy.

“The way you make that argument is you talk about specific areas where prices are rising,” Mason said. “If it’s just inflation in the abstract, then people immediately go to this interest rates and austerity solution.”