Goal to have 60% of people in every country vaccinated by mid-2022 not impossible, agency heads say 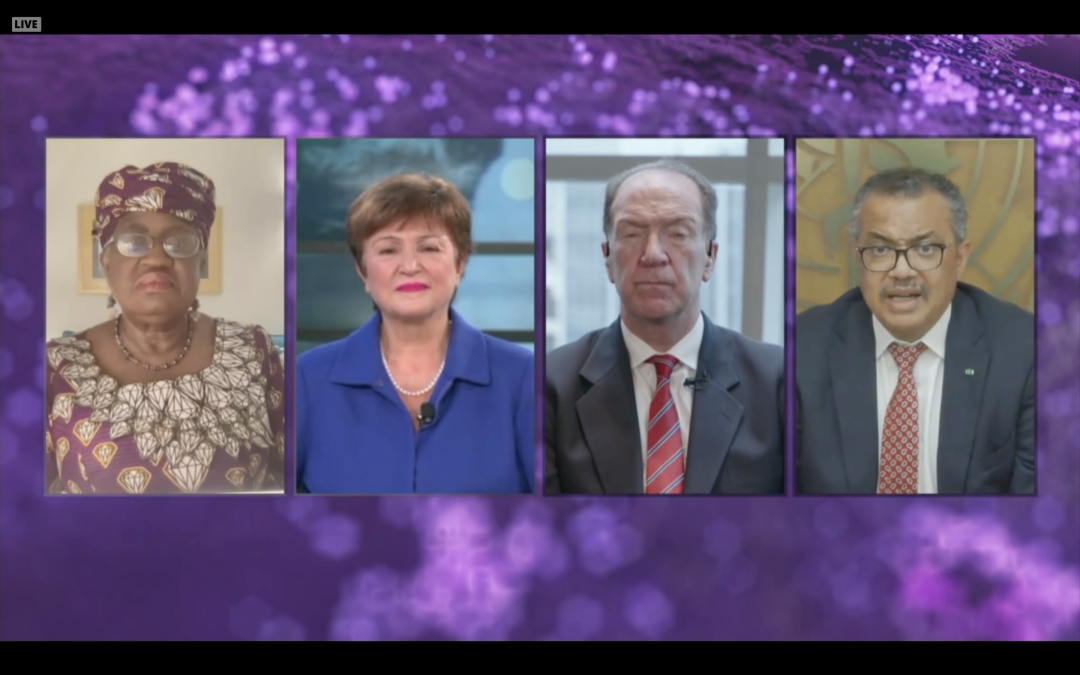 WASHINGTON — The goal to have at least 40% of people in every country vaccinated by the end of 2021 and at least 60% by mid-2022 is ambitious but not impossible, World Trade Organization Director General Ngozi Okonjo-Iweala, who is a member of the multilateral COVID-19 response task force, said Tuesday.

“If we decide as a community that we can do this, we will do it,” she said during a virtual discussion Tuesday on the sidelines of the International Monetary Fund and World Bank Group’s annual meetings in Washington. “We are very far away from where we need to be, but we need to ramp up now … this target is very ambitious given where we are now, but it’s not impossible.”

Top officials of the IMF, World Bank, World Health Organization and World Trade Organization – the COVID-19 task force – will seek over the next few days to get finance officials to assist them in making concrete plans to reach the vaccination goal.

On Wednesday, IMF Managing Director Kristalina Georgieva told reporters that failure to reach the goal could lead to $5.3 trillion in global gross domestic product losses over the next five years.

“Especially G20 countries should own those targets and make it happen because more than 80 percent of the economy belongs to them and the bulk of the production capacity also belongs to them,” said WHO Director General Tedros Adhanom Ghebreyesus.

Current vaccination coverage reaches less than 4% of people living in low-income countries, compared to over 60% of populations in richer economies, exacerbating global vaccine inequities across the world, the leaders said.

Despite plentiful supply and rapid production of vaccines in advanced economies, vaccine donations are not enough, said Ghebreyesus.

“Seventy percent of the deliveries [are] just to 10 countries. That’s completely unfair. This will not end the pandemic,” he added.

Vaccine inequity is particularly apparent in Africa, said World Bank Group President David Malpass, who pointed to the gap between donations and the actual deliveries of those donated doses.

“What we need to do is get the countries that have excess vaccines to state and follow through in an accountable way with the deliveries,” Malpass said, adding that the World Bank has 250 million doses under contract to be delivered to Africa and the developing world.

“We’re trying to have early delivery dates for the donations that have been committed by the advanced economies and we need to know what the type of vaccine is and where it’s going to be delivered so we can work on the hesitancy problem,” he said.

The question of intellectual property protection for vaccines was raised, with the officials saying that waiving the IP would trigger the transfer of the technology, skills and capacity needed to give developing countries the opportunity to manufacture vaccines.

“As [a] global community, we should ask ourselves, why do we even have the IP waiver as a legal instrument if we’re not going to use it in such unprecedented conditions?” said Ghebreyesus.

The IMF’s Georgieva agreed, saying, “If the road is to build strength [and] capacity to face health risks in the future, now is the time to approach this in a comprehensive manner.”