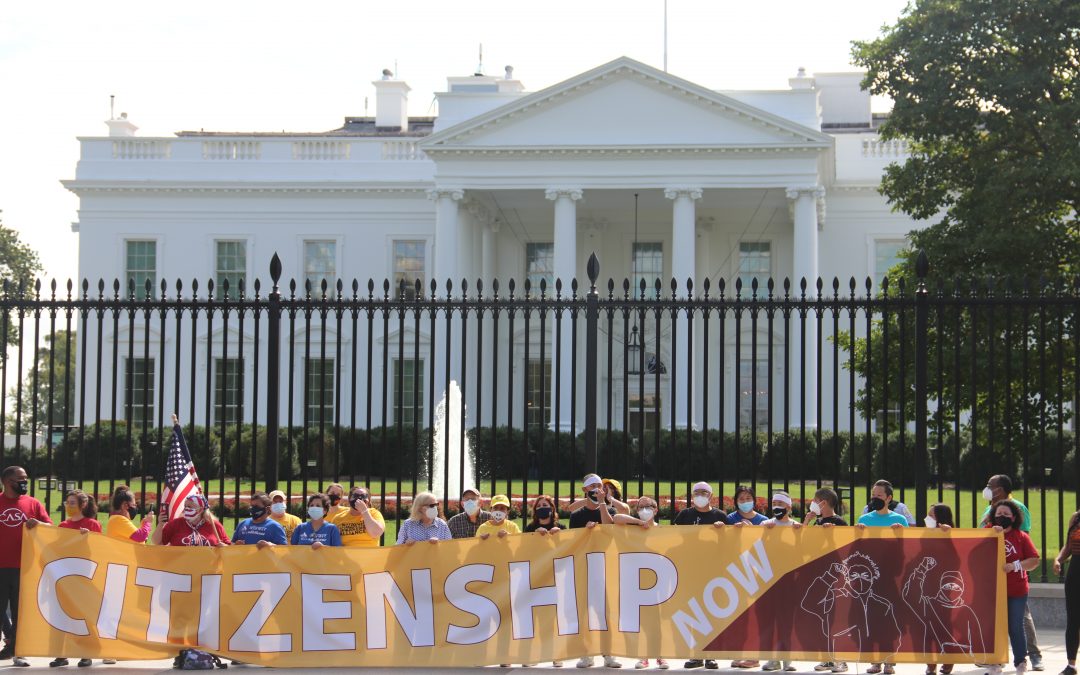 Protesters line up next to the White House fence, awaiting arrest. (Ali McCadden/MNS)

WASHINGTON — Gabriel Madison began advocating for immigration reform a few years ago in support of a friend who is undocumented. On Thursday, as part of a demonstration in front of the White House, he and 50 other protesters — in a heightened display of communal effort — were arrested.

The 19-year-old, a member of United We Dream Action, an immigration advocacy organization, said the struggles of the undocumented community and the larger BIPOC community are interconnected.

“When one of us is down, we’re all suffering. To uplift all of us in a communal effort, we have to uplift our vulnerable brothers and sisters that really need help,” Madison said.

Approximately 500 immigrants and allies had gathered at the “Immigrant Showdown” rally in Lafayette Park, hearing from speakers from immigration organizations such as United We Dream, the National Domestic Workers Alliance, Adhikaar, and more.

The protest built on several advocacy events around Washington during the past few weeks, including an event on Tuesday where advocates shaved their heads to show their dedication to immigration reform.

After the last speaker finished Thursday afternoon, protesters marched to the White House gates on Pennsylvania Avenue. Fifty-one formed a line against the fence, anticipating arrest, while the remaining protesters stayed behind.

One by one, the 51 protesters were directed out of their place in line and arrested on charges of incommoding — obstructing access to roads, sidewalks or building entrances after being told by police to move.

The display of civil disobedience cames just one week after Senate Democrats tried and failed for the second time to grant citizenship to millions of undocumented immigrants through the Biden administration’s $3.5 trillion social spending bill.

To pass, the bill would only need support from a simple majority in the Senate: the 50 Democratic senators plus Vice President Kamala Harris. Fifty-one protesters agreed to face arrest on Thursday to represent the 51 necessary votes.

Senate Parliamentarian Elizabeth MacDonough had advised Democrats against including immigration reform in the bill, but protesters say lawmakers should ignore the guidance.

Frank Sharry, one of those arrested and the executive director of the immigration policy organization America’s Voice, said lawmakers are working on a “plan C” option that might be more likely to gain the parliamentarian’s approval.

Sharry described the idea as a “statutory lookalike” of Deferred Action for Childhood Arrivals, which might involve work permits, travel permission and access to other benefits to provide protection for the undocumented.

Protesters urged President Joe Biden to deliver on his campaign promise to grant citizenship to the 11 million undocumented immigrants living in the United States.

“Remember the promises you made before the election. Now is the time for you to fulfill your promises,” said Namrata Rimal from the immigrant organization Adhikaar. “We demand citizenship. If not now, when?”