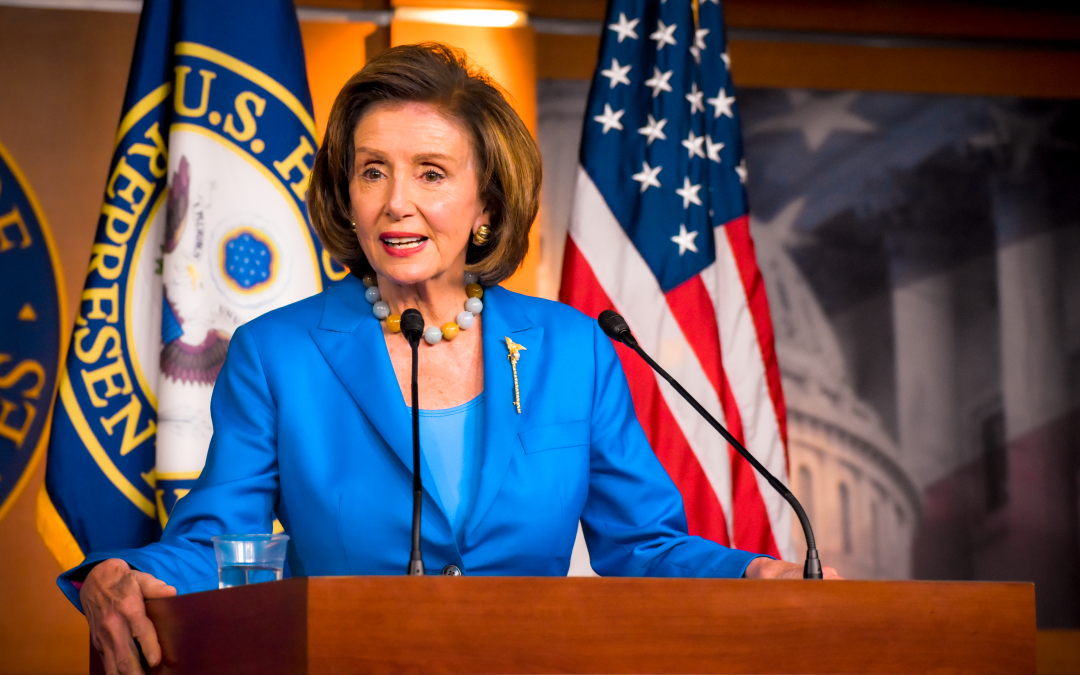 Nancy Pelosi, along with the White House and others in Democratic leadership anchored much of the negotiation around the spending and specifics of the Build Back Better Act. (Dan Hu/MNS)

Others, such as universal preschool and the expanded Child Tax Credit, were simply funded for fewer years, with supporters hoping they will become so popular that a future Congress will have to re-authorize them.

This second option was favored by Democratic leadership over the past weeks because it gives moderates in the party a lower dollar figure while allowing progressives to deliver on some of their promises to voters.

“What would be the first to go would probably be in timing, the timing would be reduced in many cases to make the cost lower,” House Speaker Nancy Pelosi said earlier this month when asked what provisions in the budget might be cut.

But, according to budget experts such as University of Maryland School of Public Policy Professor Philip Joyce, a reliance on shorter time frames to fit more policy provisions into the framework means the lowered cost is likely an illusion.

“Looking at what something costs over 10 years, it can be misleading. One of the ways to make something cost less over 10 years is to say it’s going to expire after a particular point in time,” Joyce said. “But to believe that it would actually expire, we don’t have a strong history of once something has been provided, taking it away later on.”

Tricks of the Trade

One useful case study of lowering cost through creative use of the budget window is the Affordable Care Act, the health care legislation championed by former President Barack Obama.

“If you look back at the history of the ACA as it was going through Congress, President Obama made a clear statement that he wasn’t going to sign anything that ‘added one dime to the deficit,’” Joyce said. “There was a lot of manipulation to fit those parameters, both on the revenue and on the spending side.”

To follow through on this promise, Obama delayed the implementation of the more expensive portions of the bill to lower the 10-year cost. Although the Affordable Care Act passed in 2010, major provisions such as the Medicaid expansion and the individual insurance exchanges did not fully take effect until 2014.

The 2010 cost estimate from the Congressional Budget Office projected a total cost of $788 billion for the ACA’s insurance coverage provisions over 10 years. Just $78 billion of that total came within the first four years of the bill.

However, in the present-day negotiations around President Joe Biden’s agenda, delayed implementation is quite unlikely. According to Matt Bruenig, who runs the progressive think tank People’s Policy Project, one reason for this is the perceived electoral ramifications of not delivering in the short-term on promises made to voters.

“In theory, the idea is you’re going to create programs that are going to benefit people, and they’re going to reward you electorally for it, which seems like a pretty basic theory of how you run a government,” Bruenig said. “Saying it’s not going to be implemented for five years, you’re breaking the logic there.”

Of course, with every tradeoff comes downsides — the front-loading of programs, though possibly necessary in the political short -term, could mean the “transformative” legislation being pushed by the Biden administration ends up having little lasting impact.

“Imagine if the Affordable Care Act had said it’s only going to go through 2017. There probably would be no Affordable Care Act right now. Instead, we’re slated to build on it,” Marc Goldwein, senior vice president of the Committee for a Responsible Federal Budget, said. “Anytime you make legislative choices, you take risks, but I think having something expire is a particularly large risk.”

Have Your Cake, Eat it Too

Extending the expanded Child Tax Credit in the Build Back Better Act was a priority of many Democrats for the program’s broad reach and significant effect on child poverty.

There’s just one problem: the program is expensive, especially in the context of how much had to be cut for the overall package’s political viability.

In last month’s version of the legislation — with the $3.5 trillion price tag — the program was fully authorized for four years, from 2022-2025. The Joint Committee on Taxation estimated that over 10 years the program would cost $421 billion, with $375 billion of that total spent in the four years.

In the downsized package released by the White House Thursday, the CTC’s payments are extended just one year and subject to a more stringent income requirement. Although a full 10-year estimate with this change in mind has not been issued yet, it likely shaved around $280 billion off the top-line number.

“The focus on the number, for the moderates, probably gives them cover in some sense,” Joyce said. “But I don’t know that we believe that, if you look back 20 years from now, that it’s going to necessarily cost less money than what it’s replacing.”

The budgetary mechanics of the illusion of lowered cost comes down to the role of economic forecasting agencies like the Congressional Budget Office, which can only project the cost of programs as authorized by Congress. While it may be good politics, critics say it’s bad policy.

“They’re a lot better off doing a few things well than doing a lot of things poorly. And well doesn’t mean more expensive. There are lots of ways to do many of these policies for cheaper, target them better,” Goldwein said. “But well does mean not having them randomly expire at arbitrary points over the next few years.”

One downstream effect of this choice is an increase in the deficit, despite the contention from President Biden that the bill is completely offset. While it’s true that the revenue estimates from the White House offset the spending estimates by more than $200 billion, the shorter time frame on spending means this claim may not hold up in the future.

“If you have permanent pay-fors to pay for temporary spending that you intend to continue, then, while you’re not technically adding to the 10-year debt in this bill, you’re certainly setting the stage to make it a lot easier for future debt increases,” Goldwein said.