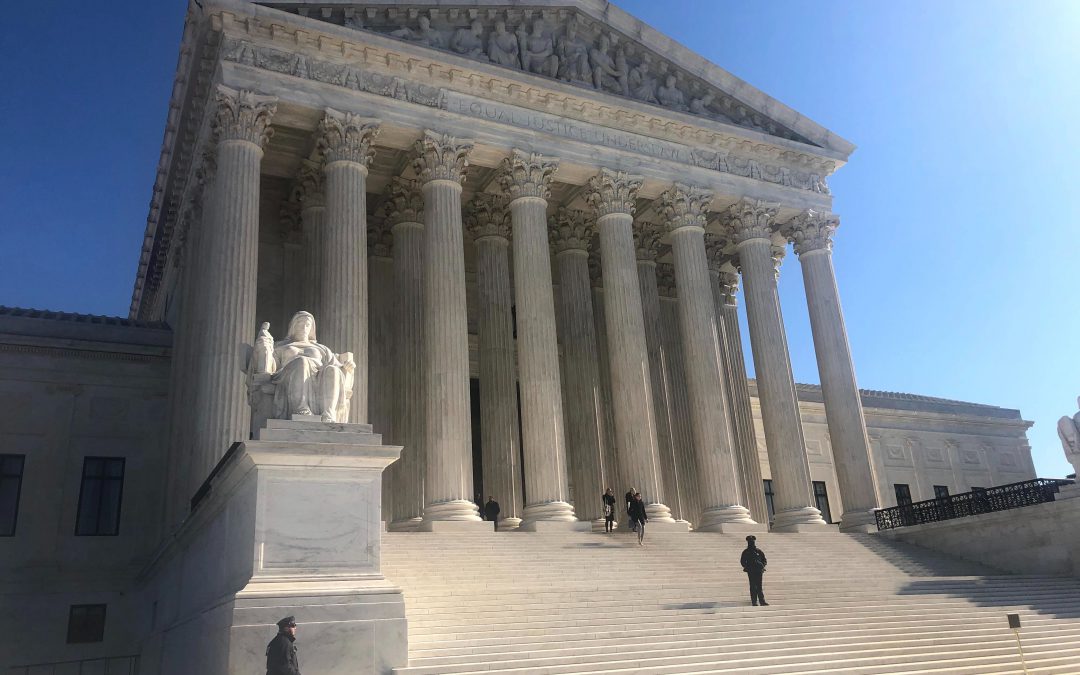 The Supreme Court’s decision on a southern border wall could impact a future declaration of a climate emergency. (Virginia Langmaid/MNS)

WASHINGTON — Rachel Fey remembers struggling to get health insurance to cover her birth control costs – more than $400 out of pocket for three months of her pills.

For some women, paying for food and shelter often doesn’t leave enough left over to pay for birth control, said Fey, now the senior director of policy for Power to Decide, a birth control advocacy organization.

But the prospect of shouldering this cost could become a reality for many low-income women.

In April, the Supreme Court will hear Trump v. Pennsylvania and Little Sisters of the Poor Saints Peter and Paul Home v. Pennsylvania, a consolidated case that would allow virtually any employer or university to deny women access to birth control based on religious or moral objections.

Under a provision of the Affordable Care Act, employers have to provide birth control coverage. However, in 2014, the Supreme Court ruled in Burwell v. Hobby Lobby that requiring family-owned corporations to cover contraception under the ACA violates religious liberties guaranteed under the Religious Freedom Restoration Act of 1993. Due to this ruling, religious organizations like the Little Sisters of the Poor are exempt from the ACA mandate.

In October 2017, the Trump administration released a regulation to make it easier for employers with religious objections to exclude contraceptive coverage from health plans for employees. Enforcement of these regulations has been blocked by federal courts in Pennsylvania and California.

Brigitte Amiri, deputy director of the ACLU Reproductive Freedom Project, emphasized the Trump administration is pushing for its regulation to become a permanent exemption.

“The exemption means nobody is paying for coverage, whether the employer or the insurance companies, and the employees are just blocked from coverage,” Amiri said.

The Little Sisters of the Poor, a Roman Catholic nursing home, claims it is being forced to comply with the ACA mandate to cover birth control despite the order’s religious objections when big corporations like Exxon and Visa are let off the hook. On their website, the Little Sisters say 45 million Americans are covered by health insurance under “grandfathered” employer plans that are required to comply with some of the Affordable Care Act, but are exempted from the contraception mandate.

In a statement, the religious organization said, “The government exempted these corporations for the sake of convenience.”

“It’s incredibly frustrating that so much attention has gone to Little Sisters and people have bought into this narrative that they shouldn’t be forced to cover contraception, which has never been really a possibility,” Amiri said.

Every year, fewer health insurance plans are covered under the “grandfather” protection. When a plan is renewed, it will no longer be grandfathered.

Under Obamacare, the Little Sisters of the Poor must sign an opt-out form saying it will not pay for contraceptive coverage for their employees, allowing for the government to ensure employees receive coverage separately. In the past, officials of the religious order argued that even signing the opt-out document is prohibited by their religion. The 3rd U.S. Circuit Court of Appeals in Pennsylvania said that filling out an opt out form is not a substantial burden on religious beliefs.

The Trump administration took the side of religious organizations and enforced new regulations that included an exception for employers “with sincerely held moral convictions opposed to coverage of some or all contraceptive or sterilization methods.”

Last May, the state of Pennsylvania fired back, arguing that the Trump administration’s new rules put a burden on the state to shoulder the costs of providing contraceptives to women who lost their coverage.

Without insurance, some women won’t be able to pay for birth control, Amiri said. She finds it “very cynical” that the federal government points to the Title X program as the place for women to turn to if they lose their coverage.

The Trump administration has not increased funding for Title X, while proposing onerous regulations on its enforcement and closing some Title X-funded programs, Amiri said.

“It’s disingenuous to say that Title X can meet these women’s needs if their employer doesn’t cover contraception when at the same time you’re implementing rules that are decimating the Title X clinic network,” Fey said.

Four million people rely on Title X for affordable birth control and reproductive care, and nearly two-thirds of those earn below the federal poverty level. If employers are able to opt out of covering contraceptives, the number of women turning to clinics that receive Title X funding will increase, even as funding has not.

Right now, the Title X gag rule would prohibit clinics that offer affordable contraceptive services from receiving Title X funding if they also offer abortion services. As a result, providers across the country had no choice but to leave the Title X program and subsequently lose millions of dollars needed to provide women with affordable birth control. Fifteen states have lost some or all of their Title X funding, and more than 8.8 million women have lost access to affordable contraception because the clinics they once depended on have lost federal funding.

Power to Decide’s Fey explained that in practice, the remaining clinics will no longer be able to afford to give a woman the method of birth control that works best for her at the low price they once offered it. In addition, they might have to cut back on their hours or the number of providers, which would increase wait times and ultimately make it harder for a woman to go to a clinic.

It is “already a patchy system when it comes to what women are able to get if they’re struggling to make ends meet,” Fey said. “Now, on top of that, her employer isn’t covering the contraceptive methods that she needs. So she has less resources in her community to turn to and no insurance coverage to cover it. So she’s facing a double barrier now.”

Fey said Title X is meant to be there as a last resort for women who don’t have insurance. Title X also provides support dollars for clinics that serve women with private insurance.

“The gag rule doesn’t just hurt people who are dependent on Title X paying for their services, it hurts any woman that depends on a clinic that gets Title X funding, which is a much larger universe of people,” Fey said. “For Title X to take on top of that women whose employers want to decide what health care they’re going to cover and not cover is a burden that it wasn’t intended to take and it’s not set up to be able to handle.”

There are over 19 million women on low incomes who are living in contraceptive deserts, counties lacking access to a clinic offering a full range of methods, according to Power to Decide.

“For women of color, they tend to lack the coverage that they need to have contraception and also the financial resources to purchase contraception out of pocket,” Taylor said. “Any sort of denial of free birth control is going to impact those communities the hardest.”

According to the Center for American Progress, women experiencing economic hardship are less likely to start using contraception or continue usage due to out-of-pocket costs. Additionally, the rate of unintended pregnancies for Latinas and black women is 58 percent and 79 percent, respectively, while the rate for white women is 33 percent.

“All women no matter their racial or economic background need access to contraception,” Taylor said.

Fey said if the rules from the Trump administration go into effect, women would be forced to make impossible choices in order to get something that is basic health care: their contraception.

“It should not be making women choose between one essential and another, when birth control is related to healthcare,” Fey said. “We don’t do that to any other kind of health care. So why are we doing it when it comes to a basic part of women’s healthcare, something that 99 percent of American women have used at some point in their life?”