WASHINGTON—Republicans and Democrats found some room for agreement on Capitol Hill Wednesday, as Republican Rep. Tom McClintock and Democratic Rep. Joe Neguse denounced the federal land management policy as proposed in the Department of the Interior’s 2021 budget plan.

However, that funding reduction was thrown into question Tuesday, when the President appeared to show support for completely funding the LWCF, instead of cutting resources.

Neguse, who is from Colorado, told Assistant Interior Secretary Susan Combs that the distance between the proposed budget and the President’s comments made it difficult to even consider the budget. 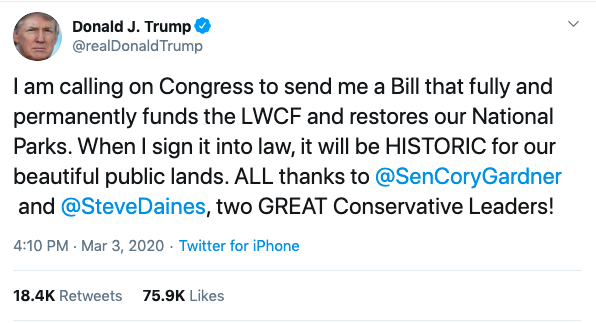 Combs told Neguse that the DOI has “been trying to ask Congress for three years” to support the land infrastructure fund, but did not reconcile the difference between the budget and the President’s statement.

McClintock, from California, noted that the federal government owns almost 46 percent of the land in his home state, and took issue with the expansion of federal land growth paired with a reduction in funding for the LWCF, which manages and upkeeps federal land.

“We have multi-billion dollar deferred maintenance backlogs at our national parks” he said. “Shouldn’t we be taking care of the land we already own before we go out and acquire more and more new land?”

“It is a part of the president’s stated policy to support conservation” said Combs, explaining that federal land expansion is a part of conservation efforts. “The public land infrastructure fund is something the Secretary and the President are very committed to.”

McClintock pointed out the conflict between the DOI claiming to protect federal land while slashing funds for conservation. “With all due respect,” said McClintock, “we are lousy stewards of the nation’s lands.”