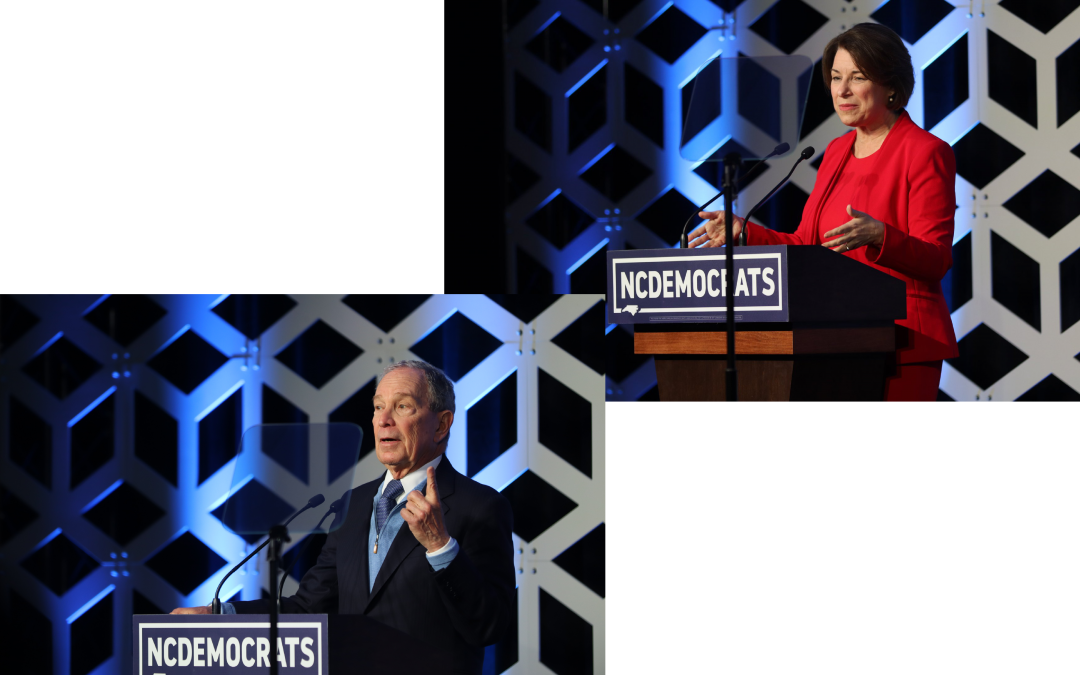 Speaking in a ballroom filled with North Carolina Democrats on Saturday, she said McCain showed her a quote: “There is nothing more liberating than fighting for a cause larger than yourself.”

“So remember,” she continued. “Despite all these fights we’re gonna have, what unites us is bigger than what divides us.”

Democratic party leaders– from state officials to the national chairman to presidential candidates — emphasized the need for party unification on Saturday at the North Carolina Democratic Party’s “Blue NC Celebration.”

In the 2018 midterm elections, Democrats in the state took back nine seats held by Republicans, breaking the GOP supermajority in the North Carolina House of Representatives. The results also gave them their highest total of representatives in the statehouse since 2008 when Democrats last held the majority. And Gov. Roy Cooper won the state’s 2016 gubernatorial race.

North Carolina is called a “battleground” state in the 2020 presidential race. Democrats believe they can build on their momentum from the past two elections and win the state this year.

But first, the party needs a nominee.

Despite growing concerns among the Democratic establishment that nominating Sen. Bernie Sanders, I-Vt., would spell doom in the general election, Tom Perez said Saturday that every Democratic candidate can beat President Donald Trump.

Perez, the chairman of the Democratic National Committee, was one of many featured guests on Saturday who saw party unity as the path to victory in November. Dispelling concerns that the past few debates have been too divisive, Perez compared the cycle to the 2008 Democratic primary. If audience members thought these debates were “raucous,” Perez suggested they watch the 2008 Democratic debate in South Carolina.

“It was spirited,” he said. “At the end of the day we all came together.”

Cooper shared the sentiment, saying when the primaries are done, it will be time for Democrats “to all come together.”

“We need to be positive,” Cooper added.

Presidential candidate Mike Bloomberg, former mayor of New York City, told the audience that he is running “to start putting the ‘united’ back in the United States of America.”

Democrats, he said, need a nominee who can build a “broad coalition” — “someone that attracts independents and republicans.”

But despite all the talk of unity, the presidential candidates in the room were still running for the nomination and delivered veiled criticisms of their opponents.

The country needs “a commander-in-chief, not college-debater-in-chief,” Bloomberg said, trying to minimize his poor performances at the last two debates, which featured pointed criticisms of his sexist language from Sen. Elizabeth Warren, D-Mass.

“If you feel stuck in the middle of the extremes in our politics, you’ve got a home in me,” Klobuchar said, contrasting herself with more progressive candidates like Warren and Sanders.

On March 3, the true frontrunner may become clearer, as 14 states—including North Carolina— will hold Democratic primaries, doling out over 1,300 delegates to the national convention. A Feb. 28 Meredith Poll showed a three-way race in North Carolina, with Sanders at 19.5%, former Vice President Joe Biden at 17.9% and Bloomberg at 17% of the vote.

Perez himself acknowledged Saturday that he doesn’t know who the nominee will be. Of the 1,991 delegates needed on the first ballot to win the nomination, he said the party has allocated roughly 150 delegates.

“Folks, I used to run marathons,” Perez said. “We’re at mile three or four of the marathon.”