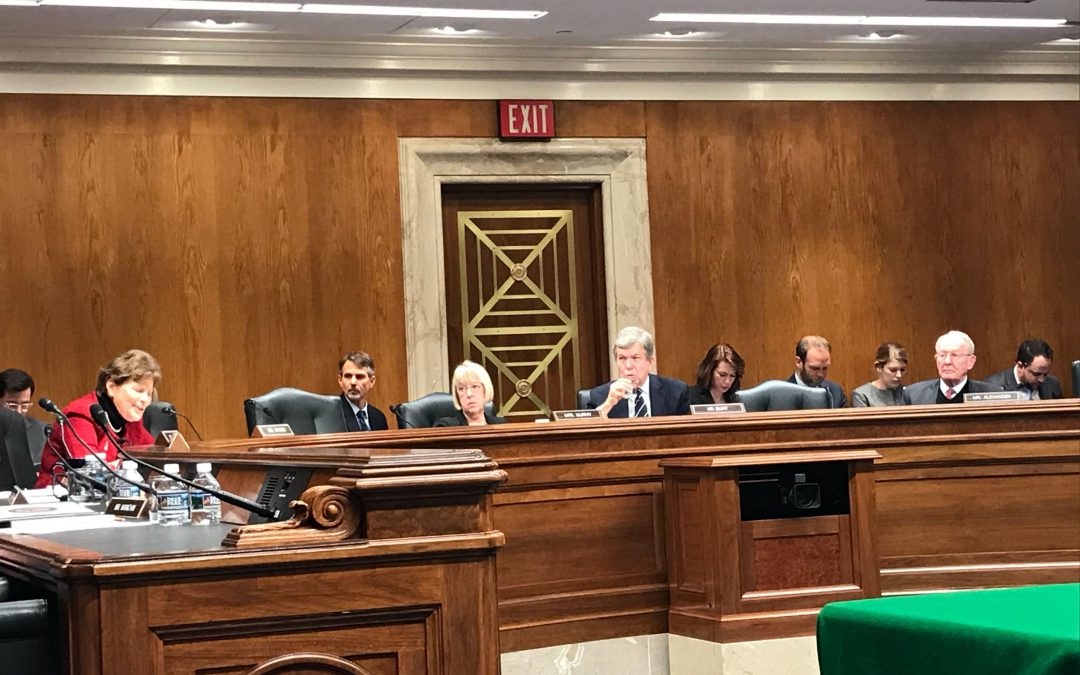 WASHINGTON — It was supposed to be a rather ordinary hearing, with Education Secretary Betsy DeVos testifying to a Senate Appropriations subcommittee about her department’s budget request for the next fiscal year. But in her opening remarks, Sen. Patty Murray of Washington, the subcommittee’s top Democrat, turned the conversation to the big issue of the day.

“I want to talk about coronavirus,” Murray said. “It’s an issue that families and students and teachers and educators across the country are obviously worried about, especially in my home state. This is truly a serious crisis, and we need every agency in this administration to respond quickly and thoroughly.”

This hearing was held on March 5, when there were only 11 reported coronavirus-related deaths in the United States, 10 of which had taken place in Washington state. In the two weeks since, the crisis has exploded, disrupting nearly every aspect of American life and forcing schools across the country to close or move to online learning.

As of March 19, 41 states, in addition to the District of Columbia and Puerto Rico, have shut down all public schools to help slow the spread of coronavirus, while 16 of those states have shut down private schools as well.

Elementary school teachers say they face two challenges — they must prepare to hold classes online while making sure their students understand the situation at hand. Melissa Morse, chief of learning and performance at Henry County Schools in suburban Atlanta, said it is most important to make sure kids are staying calm and know the facts. The district’s schools have been closed since Monday and will remain so through at least March 31, at which point they are prepared to begin a remote learning plan.

“We’ve had a few kids come to school (before the closing) with masks, with parents who are hyper-vigilant,” Morse said. “Teachers and educators are pretty good at diverting attention away from that stuff and back onto other things.”

Morse said parents have been reacting a lot more strongly to coronavirus developments than students have. Moreover, they’ve frequently been reacting to the reaction — to what they’ve seen on social media rather than facts from the Centers for Disease Control and Prevention, the World Health Organization and other similar bodies.

Henry County Schools have been in constant contact and communication with public health experts, from federal officials to local emergency management teams. And being in the Atlanta area, they have close access to the CDC, which is headquartered there.

Morse said her district has sent several letters to parents that have emphasized the latest credible information about the virus.

“People react to things like this very emotionally, and it’s hard not to get caught in responding to their emotion with emotion,” Morse said. “But the reality is, you’ve got to respond with facts. Our job is to educate kids, but it’s also to help communities.”

Private schools may not be as encouraged to take their guidelines from public health experts as public schools are, but for the most part, they too have shut their doors in the past week as the COVID–19 crisis has escalated. Francis W. Parker School, a private K–12 school in Chicago’s Lincoln Park neighborhood, moved operations online this week and will keep them there until at least March 30.

Mike McPharlin, a fifth-grade teacher at Parker, said the uncertainty is causing students particular anxiety — things that used to be predictable are no longer so. He said science teachers have taken entire class periods to talk about what students thought they knew about coronavirus.

“Helping reassure them of the unpredictability of what’s going on is the tough piece,” McPharlin said. “That’s where you can see it ripple out into their anxiety, their behavior. Over the past couple weeks, we’ve seen that unease settle in as things seem to be ramping up.”

He said Last week’s developments made the crisis feel much more real to McPharlin’s students, from actor Tom Hanks’ announcement to college and professional sports being put on hold.

McPharlin had a conversation with his class last Friday, the last day of in-person instruction, about the importance of maintaining a sense of humor even though coronavirus is a serious matter. He said humor is still good as a distraction and to keep things in perspective.

Two of his students, he said, made their “news of the week” presentations that morning, and both presented lighthearted stories completely unrelated to COVID–19.

“It was really needed. It was a great thing that that came in today,” McPharlin said. “Everything you know is getting flipped upside down, so humor comes into it more to make sense of things.”

At the subcommittee hearing, Murray mentioned another consequence of the outbreak — bullying, harassment and discrimination against students of Asian descent. She said the Department of Education needs to make sure school districts understand their responsibility to prevent and address the behavior.

Murray also echoed Morse’s argument about emphasizing the facts and ensuring students, parents and educators do not get caught up in misinformation. She called on DeVos and her staff to ensure the millions of families who rely on school meals still have access to nutrition programs while schools are closed.

“Parents, students and teachers have to have the facts,” Murray said. “They need to know what to do so they can respond effectively.”