First-generation voters take to the polls in California primary 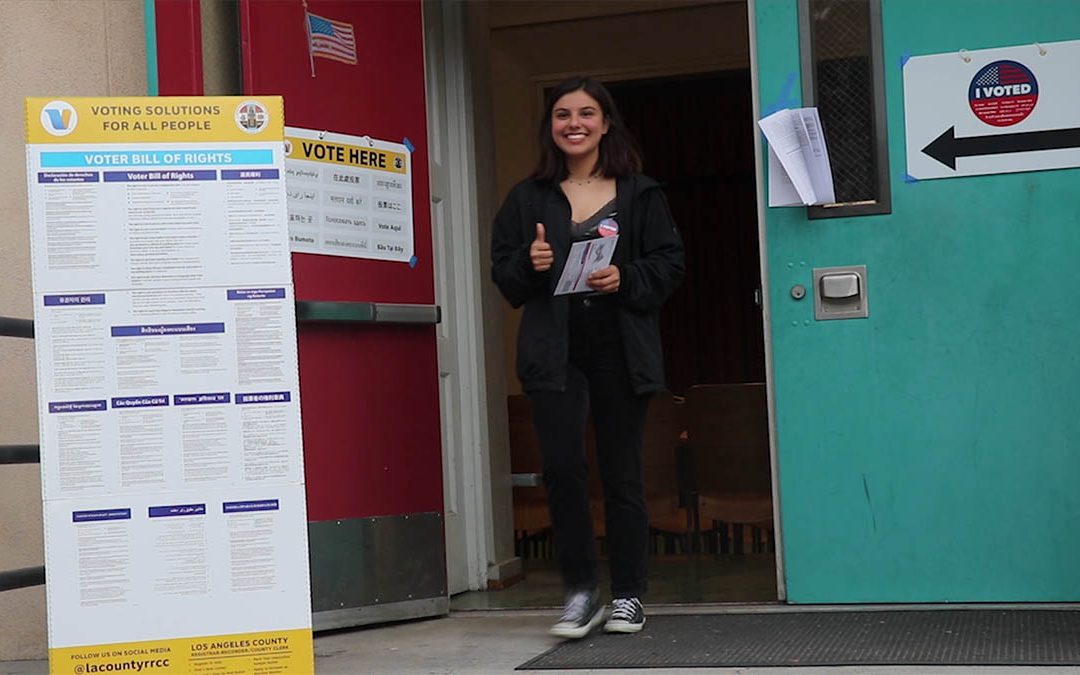 Guadalupe Bravo is all smiles and gives a thumbs up after voting for the first time. (Joey Maya Safchik / MNS)

Guadalupe Bravo is not only a first-time voter, but a first-generation voter. The daughter of Mexican immigrants, she said she casts her ballot on behalf of herself, her family and her community. The LA neighborhood where Bravo lives is 95 percent Latinx.

“Sometimes our voices aren’t really heard so voting is a great way to voice out our opinions,” Bravo said.

In 2020, millennials and Generation Z will make up 37% of the electorate. Of the 73 million millennials in the United States today, 48 million are first generation, according to the Council for Opportunity in Education.

Bravo said she made the decision to cast a ballot without much convincing. The Bernie Sanders supporter said she did not learn to vote from her parents, like some of her peers. She relied on teachers and Google to decipher the logistics of voting.

“It’s kind of scary just because I don’t know what to expect,” Bravo said. “Actually before this I searched up do I need to take anything to vote. But I’m really excited to start now that I can.”

Democratic candidate Bernie Sanders has repeatedly said increasing voter turnout is paramount to taking back the White House. First-time voters, including first-generation voters, are a critical demographic in increasing Democratic voter turnout. Republicans, meanwhile, have been showing up in historic numbers for President Trump in the early state primaries.

“We are all about not only educating young voters,” said Rock the Vote Digital Director Teja Foster. “A lot of Americans are taught the voting process through generational repetitiveness or your parents taking you to the polls. First-generation voters don’t have that.”

Bravo said political conversations around the dinner table were not common in her house. Even so, she said some of her most fervent political beliefs developed because of her status as a first-generation American.

Beyond immigration reform, Bravo said she is an enthusiastic supporter of free four-year college, especially as she sees friends who are accepted into top-tier universities unable to pay for them.

“It’s been something that has been instilled in me for a very long time,” Bravo said. “You know, go to college so that you can pursue a good career, because we didn’t have that opportunity.”

Bravo’s friend Nisa Jones, who is excited to cast her first ballot in November, said protecting the planet is the most pressing issue. She also wants to see family separation stop, but emphasized environmental policy as her top priority.

“If we don’t have somewhere to live, then nobody’s going to be able to vote, regardless of immigration status,” Jones said.

Like Bravo, Jones said she learned about the political process at school. She said current events quizzes and AP Government have inspired her to keep up with political news.

Bravo’s father said he’s proud to see Guadalupe and her two older siblings taking advantage of the opportunity to vote.

“By voting, she’s giving the power to someone who we hope will work for everyone the same without considering their social class,” Jorge Bravo said.

The younger Bravo said she thinks about the fact that she will be able to take her children to the polls, and teach them about the voting process.

“It’s great because I didn’t have that opportunity but I will be able to help my children,” Bravo said.

As Bravo walked out of the polling place, flashing a thumbs up to onlookers and quickly putting on her “I voted” sticker, she offered a suggestion to make voting more accessible for first-generation voters.

“Some of the terminology was a little bit confusing so that kind of threw me off a little bit.”

Come November, Bravo said she’ll brush up on her voting vocabulary and return to the polls.

“I think it’s important for everybody to voice their opinions and to have a say in what goes on in our country,” said Bravo.