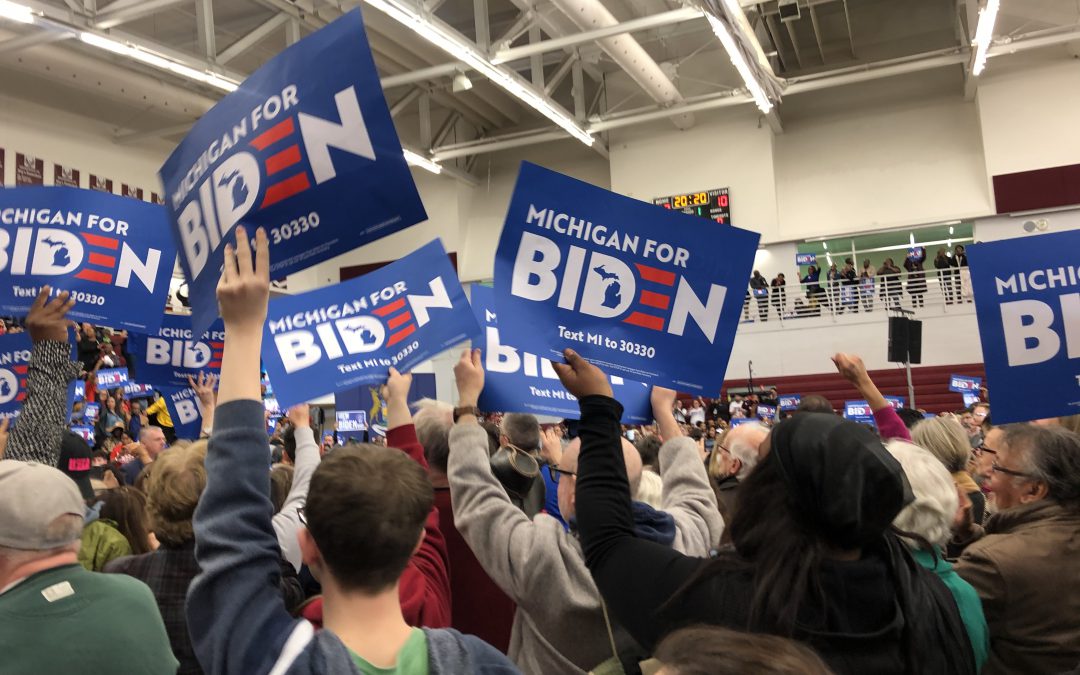 People show their support for Joe Biden in a Get Out The Vote event before Michigan's primary election. Students for Biden at University of Michigan are spending Tuesday encouraging Ann Arbor residents to vote for Biden. (Janea Wilson/MNS)

ANN ARBOR, Michigan — When freshman Andrew Schaeffler arrived at the University of Michigan last fall, he was surprised that there was no organization supporting former Vice President Joe Biden’s bid for the Democratic presidential nomination. So he did something about it.

Students for Biden at the University of Michigan held its first meeting in November , seven months after Biden started his run for president on April 25, and Schaeffler has added two dozen members with more joining in recent days as other presidential candidates end their presidential runs.

“You know, it seems like the rest of the country is seeing in Joe Biden what we’ve seen all along,” he said.

Biden is coming off of a landslide win of 10 states on Super Tuesday after losing in the early primary and caucus states of Iowa, New Hampshire and Nevada. On Super Tuesday, he won with the support of 58% of black voters, but support from only 17% of voters ages 18-29. Biden is the most popular candidate among older, more moderate voters.

Because Biden is not the candidate of choice for many young people, members of Students for Biden at the University of Michigan have been speaking to fellow students about Biden’s positions on issues that college students care about. Schaeffler is well aware that Biden is not the most popular candidate among young people and thinks it is because Biden’s plans are not as progressive as those of Sen. Bernie Sanders, especially when it comes to health care and foreign policies.

“It’s not that he’s not been fighting for these issues for decades on end, it’s just the fact that due to his history, he has a different outlook on it,” Schaeffler said.

A 2017 campus survey shows that 44% of incoming students identified as liberal with 34% of respondents saying they are in the middle of the road politically.

“People on campus are really closed-minded,” said Students for Biden Co-Founder Kareem Rifai. “It’s really shocking, too, because I’m also a Democrat and how people on the far left respond to you being a Joe Biden supporter, it’s often very aggressive.”

Rifai calls himself a “foreign policy voter.” He is Syrian-American and said family members have been hurt by the exit of American troops from Syria, a plan supported by Sanders and former candidate Sen. Elizabeth Warren.

Rifai is concerned about the genocide in Syria that is been going on for almost nine years and how the next president will respond to it. He said the responses he heard in Democratic debates on this issue were abysmal and could fail Syria once again.

During his time as vice president, Biden was skeptical of American intervention in Syria but changed his viewpoint when recently condemning President Donald Trump for removing military troops from the country. He called it a betrayal of the Kurds and “the most shameful thing a president has done in modern history in terms of foreign policy.”

“Although Joe Biden doesn’t really 100% align with my foreign policy views, he’s been really hard on China, he’s been hard on Russia and he’s committed to not withdraw all troops from the Middle East,” Rifai said.

He has found one-on-one conversations to be the most successful way to gain support for Biden. He said his close friends have become Biden supporters after talking with him on the positions that have made him a supporter.

Students for Biden has spent days leading up to the primary election holding a Get Out The Vote phone bank to encourage people in the Ann Arbor area to vote. Schaeffler thinks that the recent endorsements of Biden from Gov. Gretchen Whitmer and Lt. Gov. Garlin Gilchrist will help Biden win the state. He expects Biden to be the eventual Democratic nominee.

“In the words of one of our other club members, ‘We’ll be out there until 8 p.m. on November 3rd when polls close,” Schaeffler said. “Fingers crossed.”