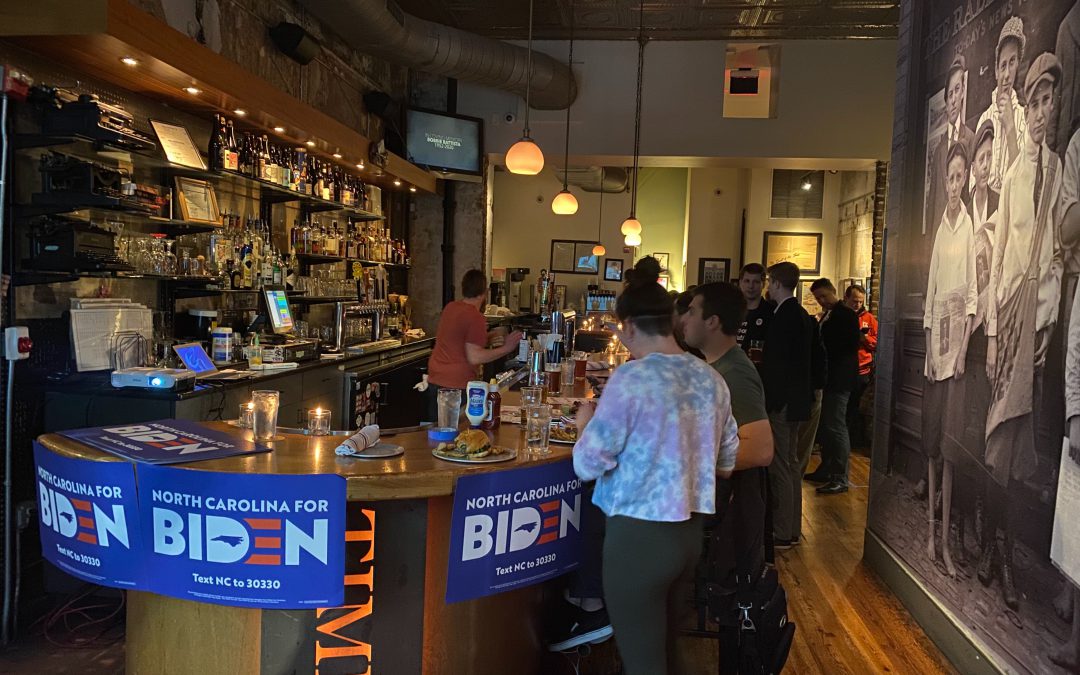 Scenes from the Raleigh Times Bar, where a crew of Joe Biden campaign workers and supporters gathered to watch results trickle in on Super Tuesday (Greg Svirnovskiy/MNS)

It’s been a big week for a man who had never won a presidential primary in his two previous campaigns. Biden’s victory came on the heels of the South Carolina Democratic primary, where he cruised to a dominant showing, picking up 48.4% of the vote. In the final days leading up to the pivotal Super Tuesday vote, two Democratic candidates –former South Bend, Indiana, Mayor Pete Buttigieg and Sen. Amy Klobuchar –dropped out of the race and endorsed Biden.

Tuesday’s results were a far cry from where things stood in late February. An NBC News/Marist poll conducted Feb. 23-27 showed Sanders narrowly winning North Carolina with 26% of the vote, Biden in second at 24% and Bloomberg third at 15%.

Esi Bonney, a Charlotte resident, said she decided to vote for Biden after Klobuchar dropped out of the race.

“Knowing that she supported him, I felt like I should also do the same with my vote,” Bonney said.

At the Raleigh Times Bar in state capital, Biden’s supporters and campaign workers gathered as results from Tuesday’s votes came in, celebrating as their preferred candidate took home a resounding early win in Virginia.

And then, North Carolina.

They shouted as Biden was announced as the winner, jumped into each other’s arms and guffawed sarcastically as American Samoa gave Bloomberg his first primary delegates.

At the downtown Raleigh bar, Biden’s voters said the way that the former vice president has dealt with loss and hardship–his first wife and young daughter were killed in a car crash in 1972 and his son Beau died of brain cancer in 2015 –resonated with them, and his values mirror closely those of North Carolina.

Allison Fenderson said she has always been a Biden supporter. She waited for him to enter the race in the 2016 presidential election, which he didn’t do in part because of the death of his son,and again this time. She said when he talks about his past hardships, North Carolinians can identify and “empathize” with him.

Bloomberg didn’t deliver the moderate challenge to Biden some thought he might. The former New York City mayor didn’t even reach the viability threshold, 15% support, in North Carolina—the state where he opened his first campaign office, located in Charlotte.

Fenderson said there’s a big difference between Bloomberg and Biden: wealth. For Fenderson, Joe is an “everyday, mainstream, work of the mill person,” while Bloomberg“just wants to throw money.”

North Carolina has stayed true to its history as a battleground state. President Donald Trump narrowly won North Carolina in the 2016 general election. That same year the state elected Democrat Roy Cooper as governor by a 0.2% vote margin. And in 2018, Democrats put a dent in the Republican stronghold in the North Carolina state legislature, winning back nine seats and taking away the Republican supermajority.

Mark Scott, a Republican voter, said he’s seen the state become more purple, though he’s lived inCharlotte for less than two years. Whichever party wins the state in 2020, he said, depends on who the Democrats nominate.

“I think it’s very up in the air at the moment,” Scott said.