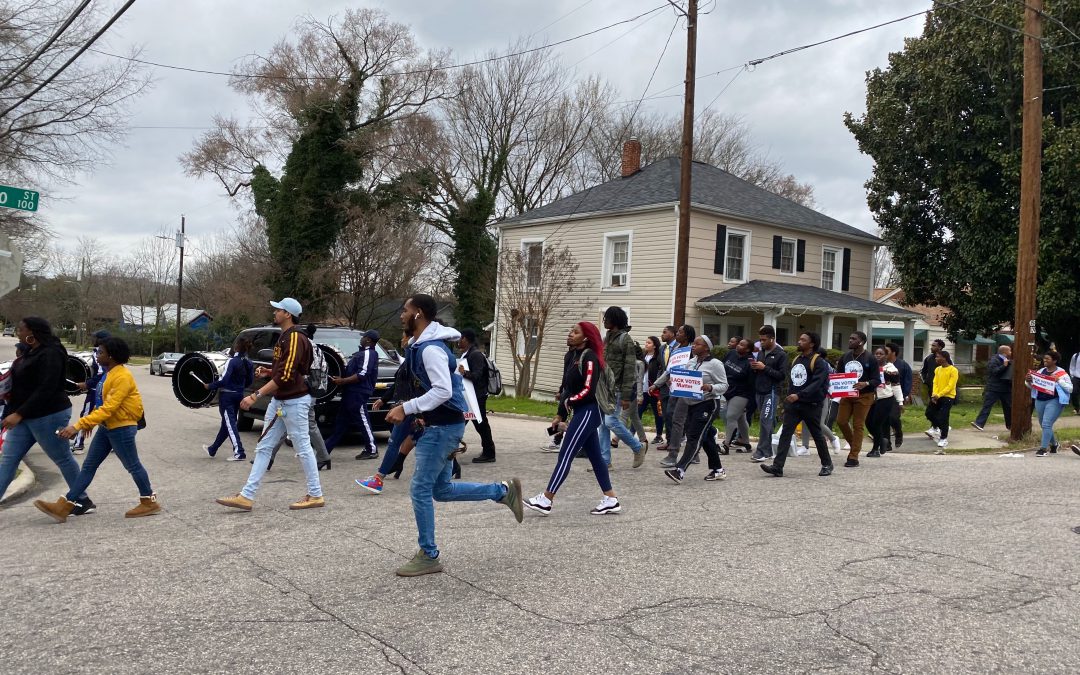 CARRBORO, North Carolina –William Baker is a recent retiree who works on pianos in his downtime and plays in a bluegrass band. He helps run church concerts and hangs out with his adult daughter and her family. But on Sunday, he stood outside the Weaver Street Market in Carrboro trying to convince passersby to vote in Tuesday’s primary elections.

He works with You Can Vote, an organization that works across North Carolina to provide people with information on how to register to vote for the Democratic or Republican primaries and where they should go on Election Day.

As important, You Can Vote provides information to alleviate the “confusion” voters feel because of the state’s recent cycle of constantly redrawing maps for congressional or legislative districts to give one party an advantage.

Baker said Carrboro is an area with a lot of new people moving in who are likely not familiar with North Carolina’s complicated –and changing –voting laws.

“They may not realize that the elections are governed differently state to state and even county to county,” Baker said.

North Carolina has a tumultuous history when it comes to voting rights. In an iterative cycle, courts have invalidated election laws and rules passed by the legislature, from voter identification to redistricting. In the past decade, the state’s legislative maps, which were only supposed to be redrawn once, have instead been redrawn three times in attempts to create districts –often not geographically logical or contiguous –that ensure a certain party has a majority.

In September, a state court threw out the legislative maps, calling them “a partisan gerrymander.” Those maps helped Republicans fill 10 of North Carolina’s 13 seats in the U.S. House of Representatives, despite the largely even split of voters in the state.

In December, a state court approved new maps, which are expected to position Democrats towards electoral victories in two more congressional districts, according to The New York Times.

The new margin will likely be 8-5 –still gerrymandered.

Allison Riggs, who leads the voting rights program at the Southern Coalition for Social Justice, said the frequency of redistricting creates confusion among the state’s voters, a concern in the Super Tuesday primaries. In general, she said there has been a lot of “all-around confusion” because the legislature keeps making “bad law that either is just completely unworkable or is invalidated by a court.”

“I think voters in North Carolina are becoming all too used to this changing game of what are the rules for voting,” Riggs said. “Our election protection efforts are a really important component of ensuring that voters know what the rules are and that they feel empowered to exercise their right to vote and aren’t scared off by the confusion.”

She said “the constant rigamarole of unconstitutional and unfair laws” perpetuates uncertainty about what the laws are.

“We’ve had so many redraws this decade that it’s really hard for voters to get to know who their elected officials are, candidates are, for there to be a sense of relationship or accountability between the voters and elected officials,” Riggs said.

At Weaver Market, Sonna Lowenthal stood beside Baker. She is a former assistant city manager for Chapel Hill who volunteers for Habitats for Humanity and teaches English for nonnative speakers. But Lowenthal said her work with You Can Vote is “one of the more useful things” she does in retirement.

Since 11 a.m., she had been handing out placards. These placards were rewritten several times over the past few months, reflecting changes in voter identification laws in North Carolina. She reminded passersby that they don’t need a voter ID to participate in Tuesday’s election.

Bryan Warner, director of communications at Common Cause North Carolina, said that’s because injunctions in the state and federal courts have temporarily blocked the state legislature’s voter ID law, which was approved by voters in 2018 and set to start in the 2020 election. Warner said his organization is currently focused on reminding prospective voters and poll workers that identification does not have to be provided to vote on Super Tuesday.

“One of the things we’re being watchful of is to ensure that voters are aware that no voter ID is needed,” Warner said. “But also to ensure that when they go to vote that the poll workers are also aware of that so there’s no confusion or people being turned away for lack of voter ID.”

Although the constant redrawing and court rulings may cause confusion among voters, Riggs said injunctions have provided “reassurance” to voters that the courts will step in to combat North Carolina’s unconstitutional laws.

But for the Rev. T Anthony Spearman, this may not be enough. As the President of the North Carolina NAACP, which has also been at the forefront of fighting against laws that suppress the vote, he said the advocates’ recent wins in the courts haven’t done enough to stop the Republican majority currently in the House of Representatives.

“We’re still having to fight the rest of them, their tactics and their antics,” Spearman said.

In Greensboro, an hour train ride from Carrboro, there’s not only confusion, but disillusionment for many of the community’s black residents.

Greensboro, a one-time industrial town that was later an epicenter of the civil rights movement, has a population that is 41% African American, as opposed to the 10.1% black population in Carrboro.

At New Light Missionary Baptist Church, just miles away from the birthplace of the sit-in movement, the Rev. C. Bradley Hunt works with youth firsthand, while also serving as the political action chair of the Greensboro branch of the NAACP for over a decade.

Hunt said young people of color in Greensboro are staying at home this election, while turnout is up for older, white people in the area.

Recently, he has had many conversations with young people who just don’t see the point in voting. They ask him, “What is in it for me? Why should I vote?”

He doesn’t blame them.

“It’s a hard sell,” he said. “When you pack all of the black folks in Greensboro in one district, but then the surrounding rural counties that are made of mostly Republican voters, they have the majority of the district, they get the representation.”

After Hunt and his team organized for Kathy Manning in District 13 last year, 80% of the City of Greensboro turned out, but the rural counties decided the election, he said.

“Our community, there are so many things that have gone wrong that I don’t really know if there’s a way out other than God intervenes,” Hunt said. “Because when you talk to everyday black folks, brown folks, the enthusiasm and the perception is not there. We continue to work, we continue to organize.”

Hunt hopes for “divine intervention” to rally young people of color to vote.

Hunt hopes for “divine intervention” to rally young people of color to vote.

Students like Mackeyla Davis Urbina are helping to mobilize young black voters. The freshman at St. Augustine’s University in Raleigh helped organize her university’s March to the Polls on Super Tuesday, where over 100 students fell in line behind the marching band and made a quarter mile walk to their polling place on Tarboro Street.

“We are not the 1%, we are the ones that get affected by everything,” Urbina said. “Getting students involved at an early age and just letting it grow with us is really important.”

Urbina is like many civic leaders who have been looking for ways to increase the rate at which young people of color vote. While turnout among college students was up 3% in the 2016 election, turnout among students at historically black colleges plummeted, down 10% from the 2012 race. African-Americans as a whole voted 5.3% less than they did in 2012, according to a report from Tufts University.

Paul Norman, director of the first-year experience at Saint Augustine’s, said people have made sacrifices for students of color to be in the position to vote.

“We will not sit here and cry spilled milk if our candidate is not elected,” Norman said. “We have to do what we’ve got to make the vote count.”