A Few Good Men: Warren’s exit marks the end of the hopes for a woman president in 2020 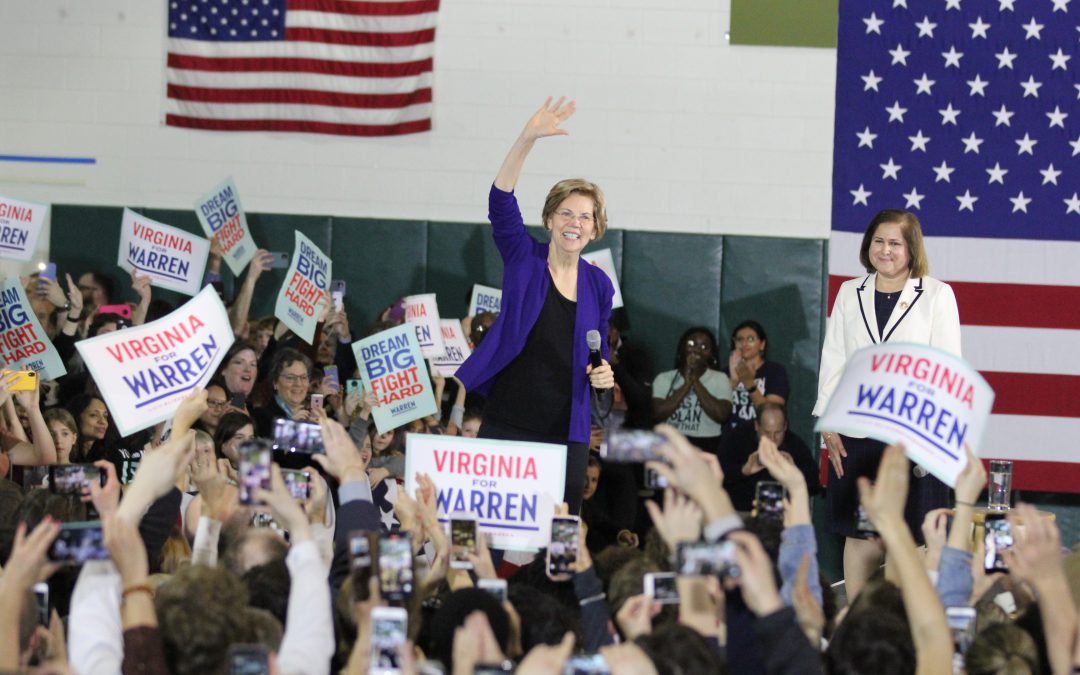 Warren greets supporters in Arlington, Va. Warren failed to reach the 15 percent threshold throughout all but one Congressional district in the state, receiving one delegate. (Zamone "Z" Perez / MNS)

WASHINGTON —Sen. Elizabeth Warren, husband and dog Bailey by her side, ended her campaign to be the first female president of the United States as it began — at her home in Cambridge, Massachusetts.

Warren used her progressivism, populism and, most essential to her candidacy, a multitude of plans to catapult her to the top tier of candidates in the Democratic presidential primary for a while.

Squeezed between two factions of the Democratic party — a Sanders wing of liberals and a Biden wing of moderates — Warren thought she could carve out a third way for a party fighting to define itself in the age of President Donald Trump.

“I was told at the beginning of this whole undertaking that there are two lanes…and that there’s no room for anyone else,” Warren said outside of her home. “I thought that wasn’t right, but evidently, I was wrong.”

After a string of poor performances in early primary contests, the Warren campaign sought to reach viability in states and congressional districts across Super Tuesday states, allowing her to amass delegates to remain competitive in the race.

But after failing to reach viability statewide in delegate-rich states like California and Texas, along with a third-place finish in her home state, the path forward disappeared.

The one-time front runner said she would continue to work on behalf of working people, and when speaking to her staff, she encouraged them to only fight the “righteous fights.”

“I will not be running for president in 2020,” Warren said. “But I guarantee I will stay in the fight for the hard-working folks across this country who have gotten the short end of the stick over and over.”

Gregg Johnson, a community organizer and former Warren delegate candidate in an Illinois congressional district, said that Warren’s pivot from Medicare for All to a “more nuanced” approach hurt her candidacy. But also, the idea of a female president concerns some people, he said.

“I think we would be wrong if we don’t admit there’s still a lot of people, Republican and Democrat, that aren’t ready for a female president,” Johnson said. “But I still think there was some of that that she was up against.”

The former contender herself avoided discussing sexism in the race. She said that either answer on sexism toward women in politics would elicit negative results, including being called a “whiner” or having “a zillion” women think she was crazy.

“Gender in this race, you know, that is the trap question for every woman,” Warren said. “I promise you this, I will have a lot more to say on that subject later on.”

With Warren’s exit, her group of supporters is highly sought after by both the Sanders and Biden campaigns.

Before she announced her withdrawal, Warren spoke with both men. She has decided to withhold her endorsement for the time being, saying she and her supporters should “take a deep breath” before deciding where their support should go.

Sangeetha Rayapati, a Warren supporter from Illinois, said that Warren’s decision to endorse would be a major factor in who she supports in the Illinois primary in two weeks.

“That would help me decide what to do because I respect her intellect, I respect her decision-making ability,” Rayapati said. “I would also respect if she didn’t endorse anybody, and we just continued to let people decide for themselves, instead of depending on others to tell them how to vote.”