Universal junctions have provided relief against executive orders, but Senators are considering curbing them 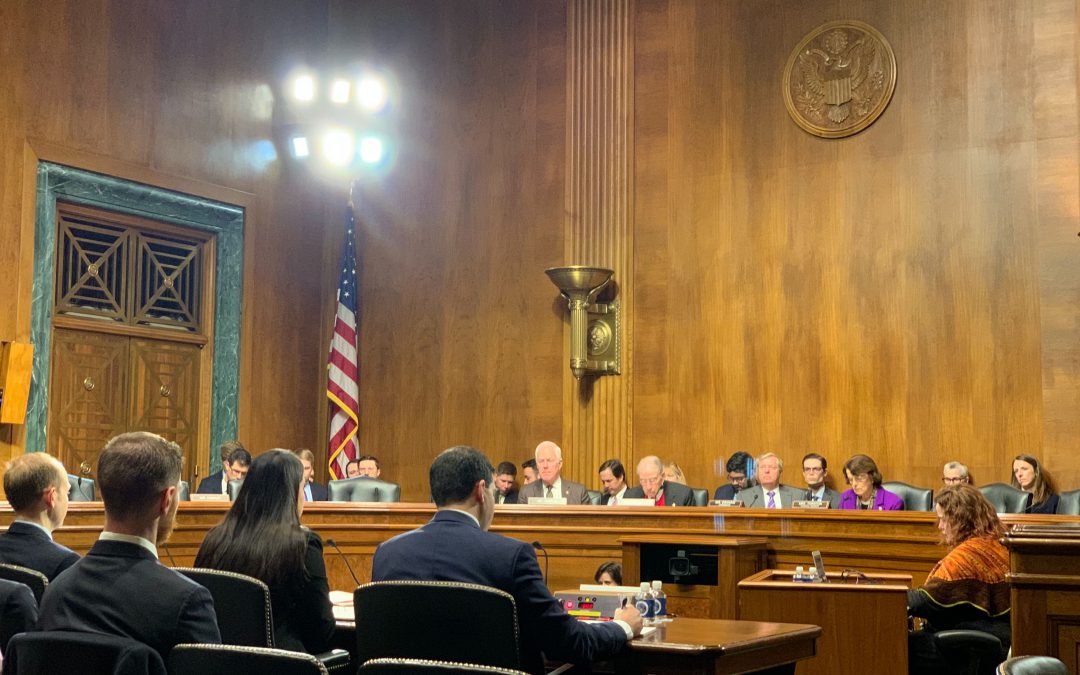 Witnesses testified before the Senate Judiciary Committee on whether universal injunctions are giving federal district judges too much political authority. (Cassidy Wang / MNS)

Many of these orders have been filed in response to Trump’s executive orders on immigration, including the so-called Muslim travel ban, efforts to terminate the Deferred Action for Childhood Arrivals program, the citizenship question on the 2020 Census and the public charge rule barring legal status for immigrants who might need public assistance.

“The bottom line is, a single district court judge can enjoin policy for an entire nation is creating chaos in our courts, chaos in policy,” said Committee Chairman Lindsey Graham, R-S.C. “It requires the courts to act faster than they normally would. Someone needs to fix it because I don’t think you can run the country this way.”

Sen. John Cornyn, R-Texas, said national injunctions also undermine political accountability because they essentially give a single federal district judge “a veto over the acts” of the president.

Democrats, however, characterized the injunctions as important curb’s on Trump’s executive orders.

“In recent years, universal injunctions have played an important role in lawsuits challenging President Trump’s immigration policies,” said Sen. Dianne Feinstein, D-Calif. “These injunctions have protected hundreds of thousands of individuals from irreversible harm while lawsuits challenging the policies make their way through the appeals process.”

Feinstein said a universal injunction has been protecting almost 700,000 Dreamers from deportation during the ongoing legal challenge to Trump’s termination of DACA, until the Supreme Court rules on the case.

While recognizing that “blanket relief” is important, witnesses and senators expressed concern about courts getting drawn to political disputes and a general politicization of the judiciary.

Through practices like “cherry-picking” and “forum shopping,” Cornyn said litigants can get their cases heard in a particular court that would likely rule in their favor. When an individual litigant presents a case to a judge who may be predisposed to grant injunction, the benefits of a real, adversarial judicial process are lost, he said.

While some senators and law professionals expressed concerns surrounding the“blanket” applicability of injunctions arising from individual cases, others recognized situations where providing immediate blanket relief is important–particularly in immigration, where policies can have life-altering consequences for individuals.

“There are certain contexts, like immigration law, where uniformity is important,” said District of Columbia Solicitor General Loren AliKhan. “The Constitution mandates, as Congress is directed, that immigration law be applied uniformly. Having a national injunction prevents this patchwork where an immigrant in one jurisdiction has one outcome and then someone else has a different one.

”However, Samuel Bray, a professor at Notre Dame Law School, said allowing the cases to reach the Supreme Court would be the answer to getting uniformity in the judiciary, although more time would pass with the policy in effect.

“I recognize this means bad things can happen in the meantime,” Bray said. “That is just part of the deal of having lots of courts, multiple circuits, circuit splits, before it gets to the Supreme Court. But you gotta take the bitter with the sweet and the hope is that we’ll get better decision-making when we ultimately get uniformity in the Supreme Court.”

Graham agreed with Bray that the best reform of universal injunctions is relying on the Supreme Court emphasizing the need for more uniformity in lower court actions.