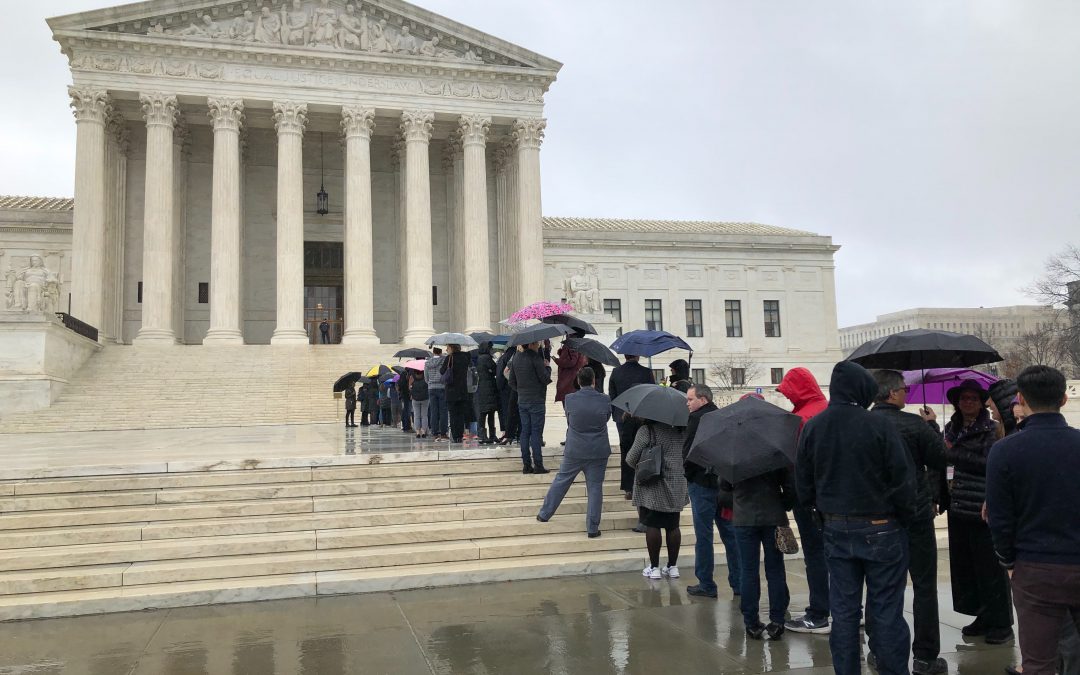 People gathered outside the Supreme Court on Tuesday as it heard arguments in United States v. Sineneng-Smith, a case that puts the constitutionality of a 1986 immigration law in question. (James Pollard / MNS)

WASHINGTON –The Supreme Court heard arguments on Tuesday in a case that could ultimately decide whether the First Amendment protects the people who encourage unauthorized immigrants to remain in the country.

The case, United States v. Sineneng-Smith, centers on a California woman who ran an immigration consulting firm to help workers in the home health care industry obtain green cards through a Labor Department certification program. Evelyn Sineneng-Smith was convicted of encouraging her clients to stay in the United States. She also was convicted of mail fraud because she kept taking legal fees for more than seven years after the certification program expired.

The 9th U.S.Circuit Court of Appeals affirmed her conviction for mail fraud, but struck down the conviction for encouraging undocumented immigrations to remain in the country. The federal government is appealing that decision.

Sineneng-Smith argued that the conviction violated her First Amendment free speech right. While “speech integral to criminal conduct” is not protected by the First Amendment, the appeals court ruled that a section of the 1986 Immigration Reform and Control Act law was too broad and therefore violated free speech protections.

“The statute potentially criminalizes the simple words — spoken to a son, a wife, a parent, a friend, a neighbor, a co-worker, a student, a client — ‘I encourage you to stay here,’” Tashima wrote.

Justice Samuel Alito asked Feigin for his interpretation of what it means to encourage an illegal immigrant to stay in the country and whether speech alone can ever constitute a violation of this statute.

Feigin argued the law’s use of “encourage” narrowly means “that you have to substantially participate in the activity as something that the defendant wishes to bring about or to succeed.”

Justice Stephen Breyer, questioning Feigin, suggested that “encouragement” does not imply solicitation because its most important condition is that what is being solicited is a crime. And while illegally entering the country is a crime, simply residing afterwards in the country is not, Breyer argued. Therefore, he added, the law couldn’t apply to requests that an unauthorized immigrant remain in the country.

Arguing for Sineneng-Smith, Fleming said the Justice Department’s interpretation would go so far as to ban a lawyer from giving accurate advice encouraging an undocumented immigrant to remain in the country.

Amnesty International filed a brief in support of Sineneng-Smith. According to a report published last July by the human rights organization, the government created a “watchlist” maintained by the Customs and Border Protection regional office in San Diego.

The list of 59 journalists, lawyers and other activists at the border, Amnesty International argued, targets “professionals whose very responsibilities require them to engage in protected expression.”

“Customs and Border Protection’s use of the watchlist reveals how broadly the government believes this provision reaches—for example, to individuals simply providing comfort or legal advice to migrants,” the brief said.