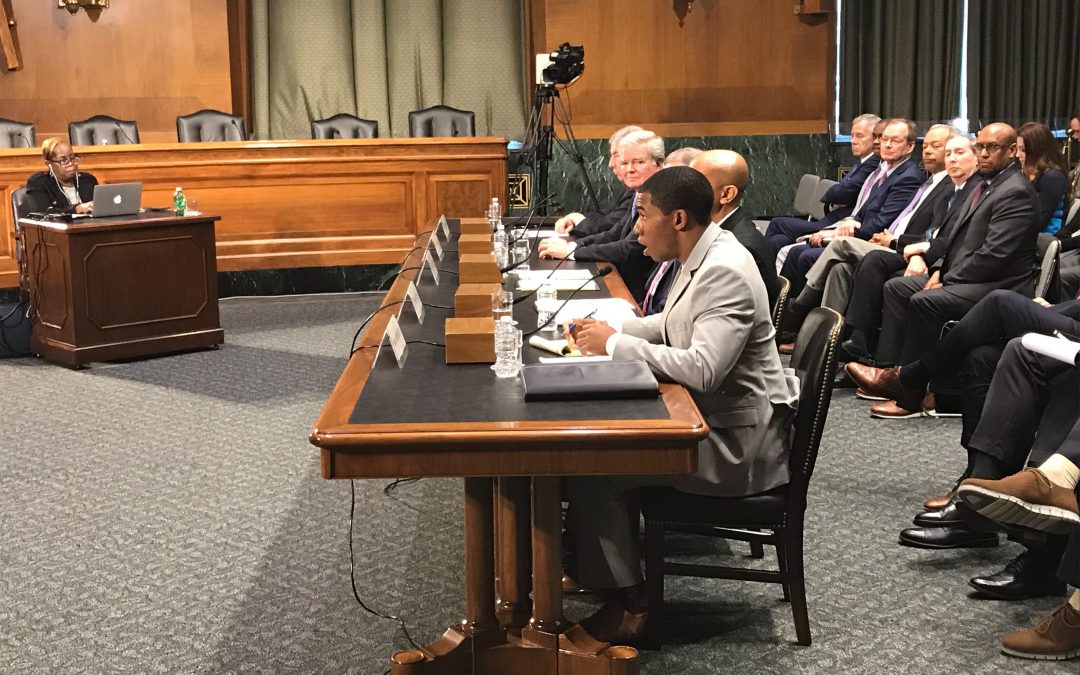 Kendall Spencer, chair of the NCAA Student-Athlete Advisory Committee, and other witnesses testify before a senate subcommittee about college athletes benefitting from their name, image and likeness. (Benjamin Rosenberg/ MNS)

WASHINGTON — Student athletes may decide to choose to play sports at universities that will allow them to profit from their name, image and likeness if Congress doesn’t act, Rep. Anthony Gonzalez, an Ohio Republican and former Ohio State football star, said Tuesday.

Gonzalez spoke at the first-ever hearing on compensating college athletes, which was conducted Tuesday by the Senate Commerce subcommittee on manufacturing, trade and consumer protection.

College athletes fuel a $14 billion industry but do not reap any of the benefits, said Sen. Richard Blumenthal of Connecticut, the panel’s top Democrat.

“Everyone is profiting off college athletics except for the athletes themselves,” Blumenthal said. “We should make sure they receive equitable compensation.”

In September, California became the first state to allow compensation when it passed the Fair Pay to Play Act, which is scheduled to take effect in 2023. According to California state Sen. Nancy Skinner, this bill will enable student-athletes from the state’s 24 public colleges and universities to be paid indirectly through sponsorship.

There needs to be a federal standard, said Kendall Spencer, a former track All America at the University of New Mexico who chairs the NCAA’s student-athlete advisory committee. Gonzalez agreed, saying he will introduce a bill to permit student-athletes to benefit from their name, image and likeness while also pre-empting the California law.

“While I agree with the idea in principle, California’s law fails to capture the nuance that is required to get this right,” Gonzalez said. “A state-by-state approach to” to the issue “would throw the collegiate athletics system into chaos.”

Several subcommittee members, particularly those from states without major metropolitan areas — and the professional and major college sports teams that come with them — questioned whether allowing student-athletes to be compensated would actually lead to a more level playing field.

Division I football and men’s basketball players from “autonomy conferences” such as the Big Ten and Big 12 get much more exposure than other student-athletes. There would be far more opportunities for them to benefit from endorsement deals and the like compared to athletes at smaller schools and in “non-revenue sports,” particularly those on women’s teams.

“As someone who represents a state with mid-major universities that aren’t part of the Power Five conferences, (I wonder) how you structure this in a way that is fair and that doesn’t create disincentives for some of those smaller but very good schools to attract and recruit good athletes,” Sen. John Thune, R-S.D., said.

In December, a bipartisan group of senators formed a working group to address student-athlete compensation. While none of the subcommittee members were part of that group, subcommittee chair Jerry Moran, R-Kan., said he will talk with his colleagues to determine the next steps.

Spencer said student-athletes do not have the time to monitor the use of their name, image and likeness due to their busy schedules, so they need to continue to be included in the conversation.

“One of the best successes is the simple fact that student-athletes are involved in all of these discussions,” Spencer said. “In order to recognize the differences between schools in rural neighborhoods and schools in more affluent areas, we have to give student-athletes a chance to craft some of these rules.”