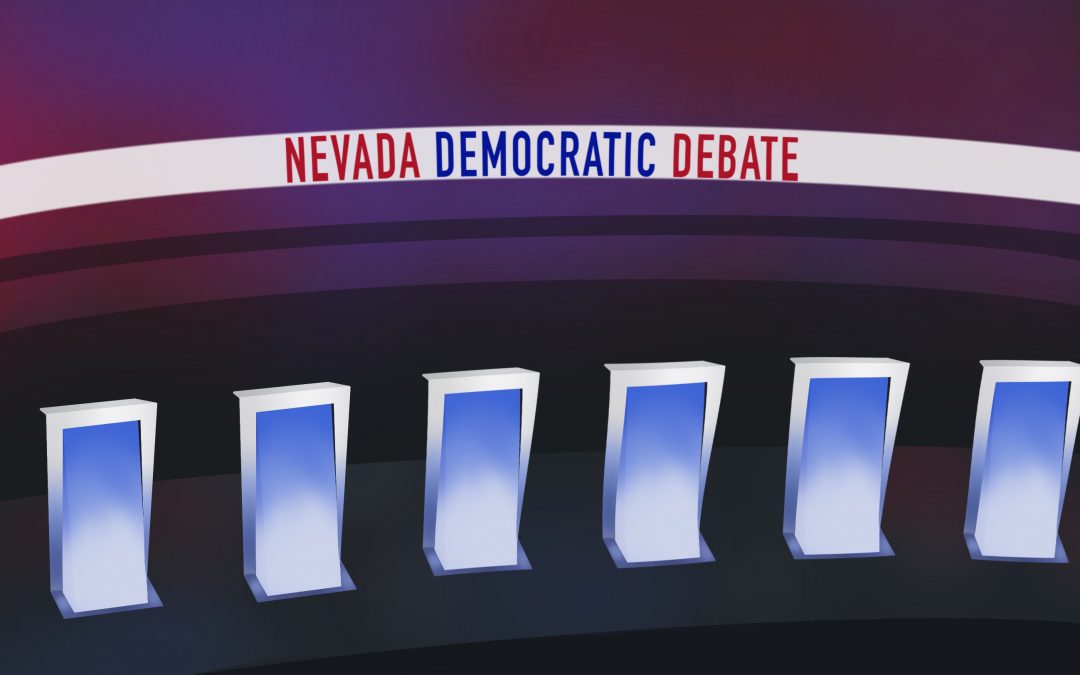 The Democratic National Committee set two qualification thresholds: candidates must have received at least one delegate in an early primary or caucus state or met polling averages.

A day ahead of the debate, policy experts from the American Enterprise Institute and The Brookings Institution weighed in on the candidates’ prospects on Tuesday.

Former Vice President Joe Biden’s candidacy is on the line after his campaign took hits in Iowa and New Hampshire, winning only six delegates in total.

Mathew Continetti, resident fellow at the American Enterprise Institute, saidBiden has the “most to lose” after spending a year as the Democratic frontrunner.

“If he were to not win any contests through Nevada this weekend and then South Carolina the following weekend, that would be just amazing,” Continetti said.

Mike Bloomberg qualified for the Nevada debate following a NPR, PBS and Marist poll released early Tuesday that put him at 19 percent support among Democrats and Democratic-leaning independents nationwide.

William Galston, a senior fellow on governance studies at The Brookings Institution, said Bloomberg getting on stage is a big deal.

“This is hugely significant because he has risen very sharply in national polls on strength that he has waged mostly on the air over the past few months,” Galston said.

The same poll put Sen. Bernie Sanders at 31 percent support. This week, Bloomberg and Sanders butted heads. Sanders repeatedly attacked Bloomberg for spending upwards of $381 million since announcing his campaign. Sanders tweeted, “Mr. Bloomberg, like anybody else, has a right to run for president. He does not have a right to buy the presidency.”

Continetti said that Bloomberg’s presence will “shape the direction of the debate since the contest looks increasingly to be one between Bernie Sanders and Bloomberg.”

Former South Bend Mayor Pete Buttigieg has the highest number of delegates at 23. Buttigieg took hits from Biden in recent debates and seemed to falter over the question of why the arrests of black people for marijuana possession were four times higher the arrests of white people in South Bend.

Buttigieg has faced difficulty attracting minority voters. With a strong percentage of Hispanic and Latino residents in Nevada, Buttigieg could be in trouble.

“Mayor Pete needs to demonstrate that he can appeal to voters outside of Iowa and New Hampshire, especially since minority voters comprise such a core part of the Democratic coalition,” Continetti said.

He added that Buttigieg set out to appeal to both left-leaning and moderate Democrats, but has not yet achieved that goal.

“He needs to demonstrate this ability to unite the party,” Continetti said.

Galston said he hasn’t seen signs of a “post-New Hampshire surge” for Buttigieg, and it’s not clear whether Nevada’s results will maintain the campaign’s momentum from Iowa and New Hampshire.

Sen. Amy Klobuchar made a turn-around after New Hampshire’s Democratic debate. After receiving just one delegate in the Iowa caucuses, the Minnesota senator claimed six more in New Hampshire. Polls listed her at just 10 percent, but following the New Hampshire primary, she rose to 20 percent.

“She’s going to have to up her game and show that she can come close in Nevada to sustain her candidacy,” Continetti said.

Galston is doubtful that Klobuchar can maintainher surge, saying that she will need another “break-out performance” to shape the attitudes of voters and maintain her momentum.

Vermont Sen. Bernie Sanders has the second highest number of delegates at 21. After leading in polls at 26 percent in New Hampshire, Sanders appears to be the biggest threat to other candidates.

“Bernie Sanders is flying pretty high both in Nevada and nationally,” Galston said. “I would imagine that another of the other candidates have incentive in slowing his rise.”

Continetti said the Democratic nomination is Bernie Sanders’s to lose.

Galston said one of the main issues in Warren’s campaign is her inconsistent message. She once billed herself “Warren the fighter,” but it has increasingly become “Warren the uniter.”

He said that Warren’s strongest case is to be the candidate who brings progressive and moderates together because “she’s never going to outfight Bernie Sanders.”

Continetti added that sharing a socialist platform with Sanders has hurt her. “The problem right now is that there are still so many candidates in the race, they’re splitting the anti-Sanders vote,” he said.