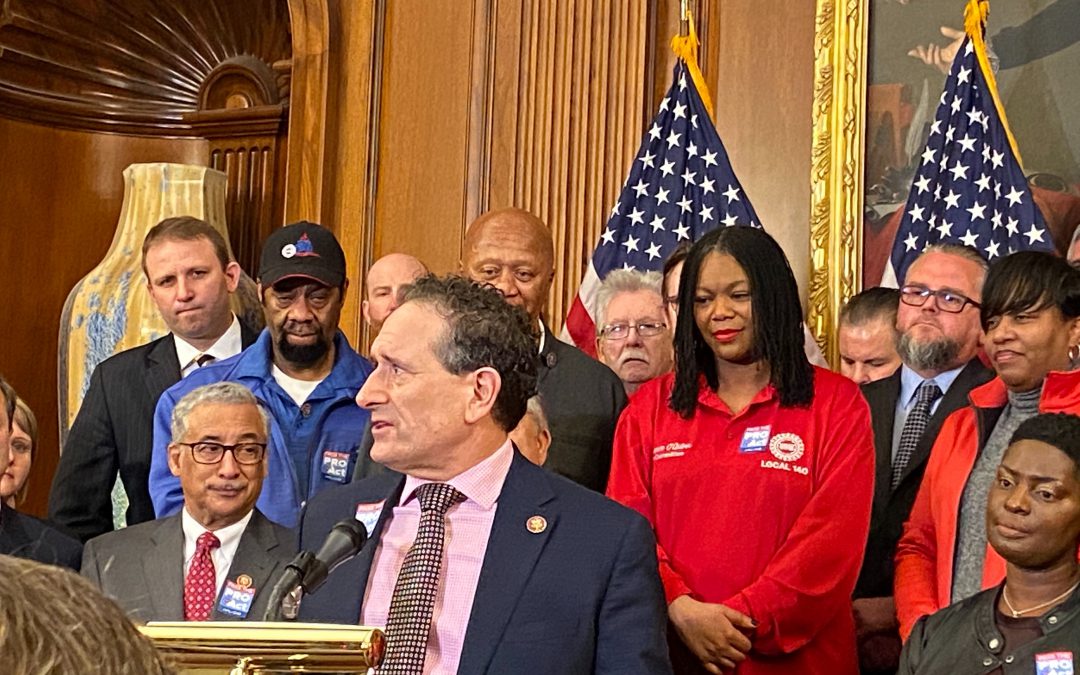 WASHINGTON — House Speaker Nancy Pelosi on Wednesday called for the House to pass a bill designated to strengthen workers’ rights to unionize and collectively bargain.

Pelosi was joined at the news conference before Thursday’s scheduled House vote by union members and leaders, most notably AFL-CIO President Richard Trumka.

“This is about stemming the assault Republicans are making on the rights of working men and women,” Pelosi said. “The middle class has a union label on it.”

From 1983 to 2015, union membership steadily declined by nearly 50%, according to the Bureau of Labor and Statistics. The legislation aims to increase union membership in both the private and public sectors by making the process of unionizing easier.

Trumka used his moment at the podium to introduce a worker who would be helped by the legislation — Verizon Wireless employee Jennifer Womack. She wanted to organize a union at her workplace after she experienced problems in getting paid medical leave, even confronting the CEO of Verizon at a shareholders meeting. Womack and her coworkers were later made to sit in company meetings that outlined reasons to not organize their workplace.

The new labor bill would prohibit such activity by employers and companies. He said the “union busting industry” spends money to keep workers from organizing and works “to block workers from exercising the freedom that the law is supposed to protect.”

Rep. Bobby Scott, D-Va., who chairs the House Committee on Education and the Workforce that recommended the House pass the bill, urged support for labor unions that have kept the economy strong.

“The American economy isn’t working for most American workers,” Scott said. “Throughout their history, America’s labor unions have ensured that workers received a fair share of the profits they produce.”

In an op-ed on Fox Business, Rep. Fred Keller, R-Pa., a member of the committee, wrote the proposal would strip workers of their ability to choos whether to join a union. It would ban “right-to-work” laws that are meant to give workers choice in joining unions, Keller argued.

The Democrats’ bill “would have many harmful effects on workers. Cloaked in the language of employee protection, the real result of the … Act is providing workers with fewer choices, fewer rights, and an inability to speak for themselves,” Keller said.

Pelosi and others expect the Democratic-controlled House to pass the bill, but many bills passed by House Democrats have stalled in the Republican-controlled Senate.

Working families are in every congressional district in the country, Rep. Frederica Wilson, D-Fla., said, and predicted that would be key in gathering Republican votes in the Senate to keep the proposal from the same fate as many other Democratic bills in the upper chamber.

“Everyone who is in Congress represents working people, and this is a working people’s bill,” Wilson said. “It will take pressure from the Senate’s constituency base to help them understand what the (bill) is all about and how it will help them.”