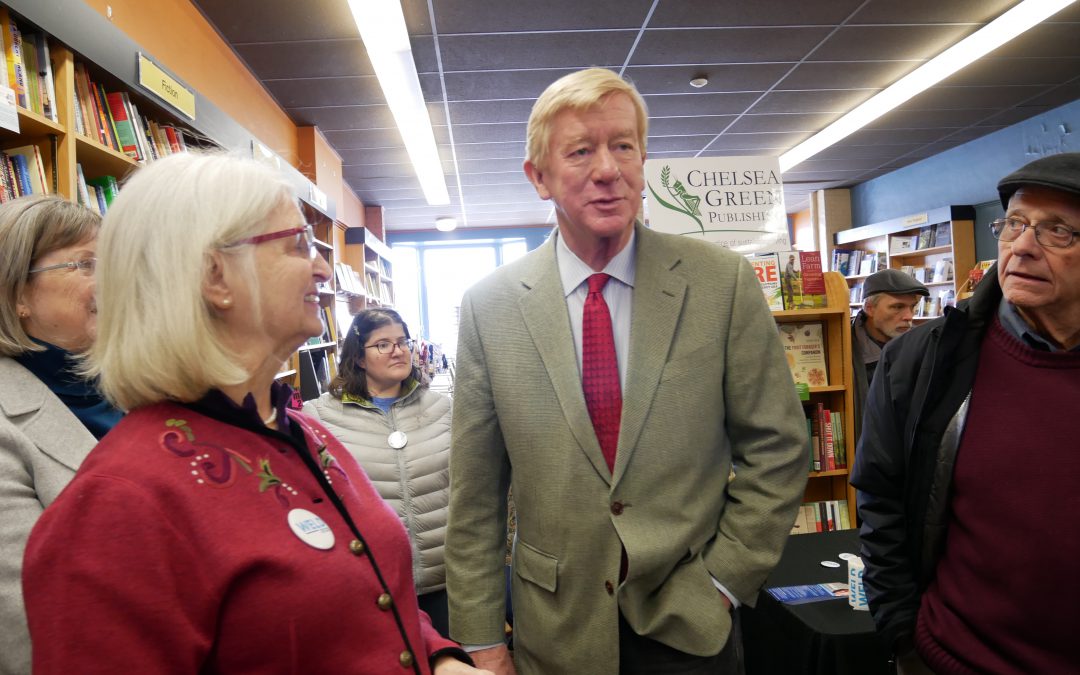 MANCHESTER, N.H. – Monday morning, 10:15 a.m. The city of Manchester was preparing to receive President Donald Trump, where thousands of his supporters were expected at a rally that evening. Meanwhile across town, Trump’s closest competitor, Bill Weld, was taking questions from Michael Smerconish at a makeshift radio booth in the corner of the Red Arrow diner.

Weld, a two-term Massachusetts governor who last held public office in 1997, has a fraction of the resources and name recognition of the president. National polling among likely voters pegged him at high of six percent last month, with Trump holding an 86-point advantage.

In New Hampshire he’s spent nearly $22,000, according to the Center for Responsive Politics, $48,000 short of the nearest active Democratic candidate, Tulsi Gabbard, and less than a tenth of the Trump campaign’s expenditures in the state.

But he does have one distinct advantage over the incumbent: he’s been to New Hampshire more than 200 times in the last year and his team has been canvassing the state since November.

“There’s a saying that a New Hampshire resident will vote for a candidate only if he’s shaken hands with him three times,” said Christina Goodlander, co-manager on Weld’s national campaign. “Gov. Weld’s shaken a lot of hands.”

And a new poll conducted Feb. 8-9 by Emerson College puts Weld at 16 percent in the state, the first time he’s hit double digits this year and the highest he’s polled since April.

Weld is in many ways Trump’s opposite. He’s been a Republican since age 18, absent his stint as Gary Johnson’s running mate on the Libertarian ticket in 2016. He served as counsel for the House Judiciary Committee during Richard Nixon’s impeachment inquiry and worked as a federal prosecutor for the Reagan Justice Department until he resigned in protest of improper conduct by a superior. As governor, he earned high marks for his economic policy from the conservative Cato Institute while being reelected by an overwhelming majority in a principally Democratic state.

Weld speaks fondly of Sens. Bernie Sanders of Vermont and Elizabeth Warren of Massachusetts, though he argues they’re too left-of-center to lead the country, and he broke with Gary Johnson to defend Hillary Clinton when the FBI disclosed it was investigating her emails in 2016.

Politically, Weld is a social liberal who simultaneously holds up strong environmental policy and fiscal conservatism. He has publicly railed against Trump, saying the president was “clearly guilty” of the charges leveled against him in the Senate impeachment trial and compared him to dictators Robert Mugabe and Filipino President Rodrigo Duterte at a town hall at Exeter’s Water Street Bookstore on Sunday.

His impact in the race has been modest so far: he picked up a single delegate in Iowa, denying the president a clean sweep. And both the Republican National Committee and many state parties have already thrown their support behind the president.

“The state G.O.P.s have become Trump’s G.O.P.s. It’s not necessarily reflective of Republican voters,” Goodlander said Sunday while canvassing with a group of Weld supporters in Exeter.

Seconds later, the occupants of a passing Honda minivan rolled down their windows and chanted “four more years!” at the Weld group.

Goodlander shrugged. “They’re entitled to their opinions,” she said. 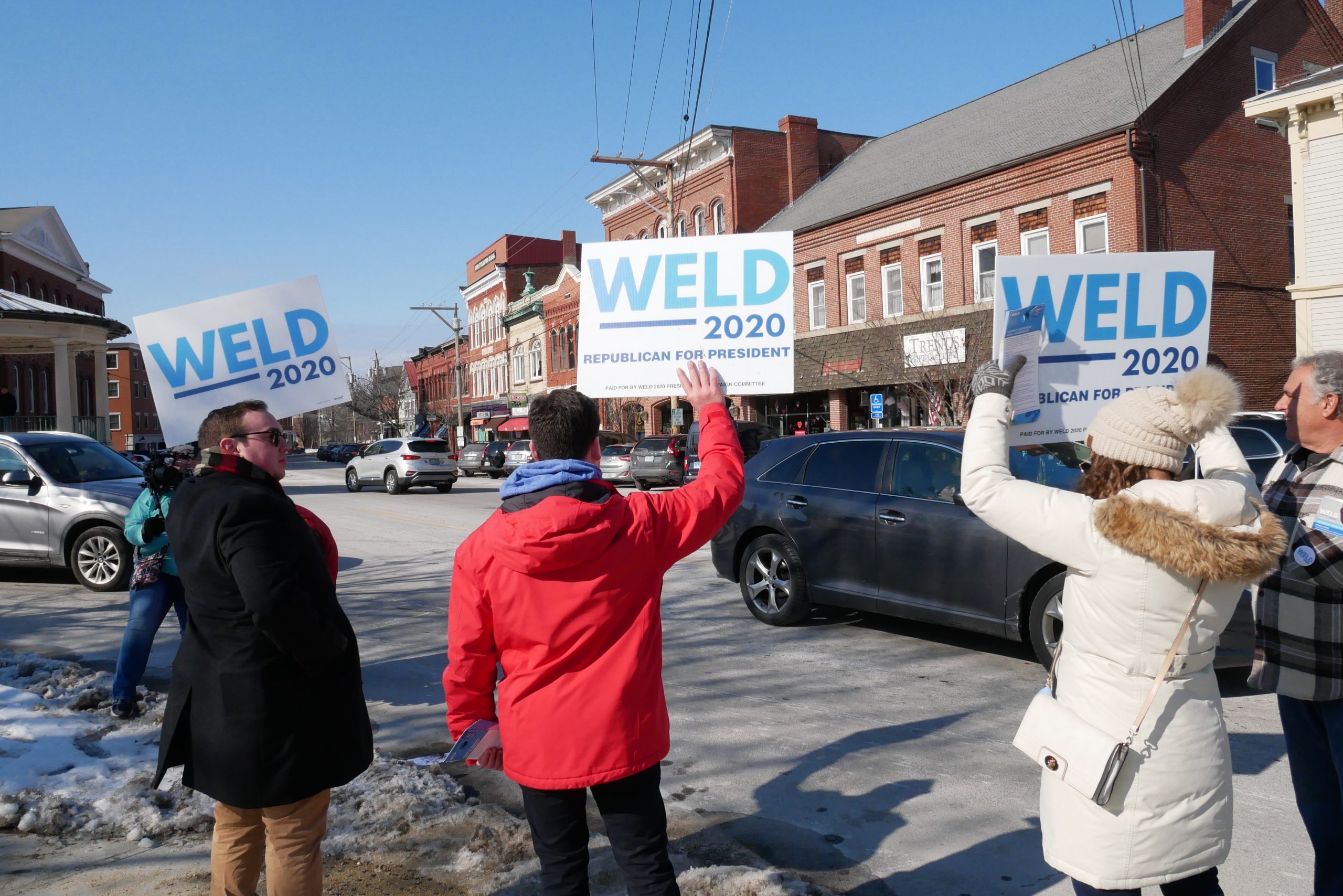 In New Hampshire, Weld hopes to repeat Pat Buchanan’s surprise 40-point, second-place finish in the 1992 Republican primary – a comparison Weld makes begrudgingly, since Buchanan was up against Weld’s fellow New Englander George H.W. Bush, for whom Weld campaigned. Weld’s state director Ryan Dumont said the campaign would like to exceed the benchmark set by Buchanan and is already confident they’ll clear the 10-point benchmark to be eligible for delegates.

From there, Weld said his focus would turn to Super Tuesday and the 24 states that allow crossover voting, where he plans to court Democrats to vote in the Republican primary.

Rather than “throwing a dart” at the wide slate of Democratic nominees, Weld said, voters can “put a hole below the water line” in Trump’s campaign before the general election.

He also has hopes for a write-in campaign in Alaska modeled after Sen. Lisa Murkowski’s successful reelection bid in 2010.

And if he wins in New Hampshire, Weld said, “Donald Trump is sunk.”

“That has never happened, for a sitting president to lose the primary here. The odds of that are uphill, but that hasn’t deterred me,” Weld said.

Don Chartrand, the owner of Water Street Bookstore, said there were many independents and Republicans in Exeter he could see being swayed by Weld.

“The electorate is very fluid and very well-informed, and they make up their minds in their own time,” Chartrand said.

He added, “Exeter is very much in the spirit of New Hampshire’s ‘live free or die’ motto, and we don’t tolerate autocrats.”