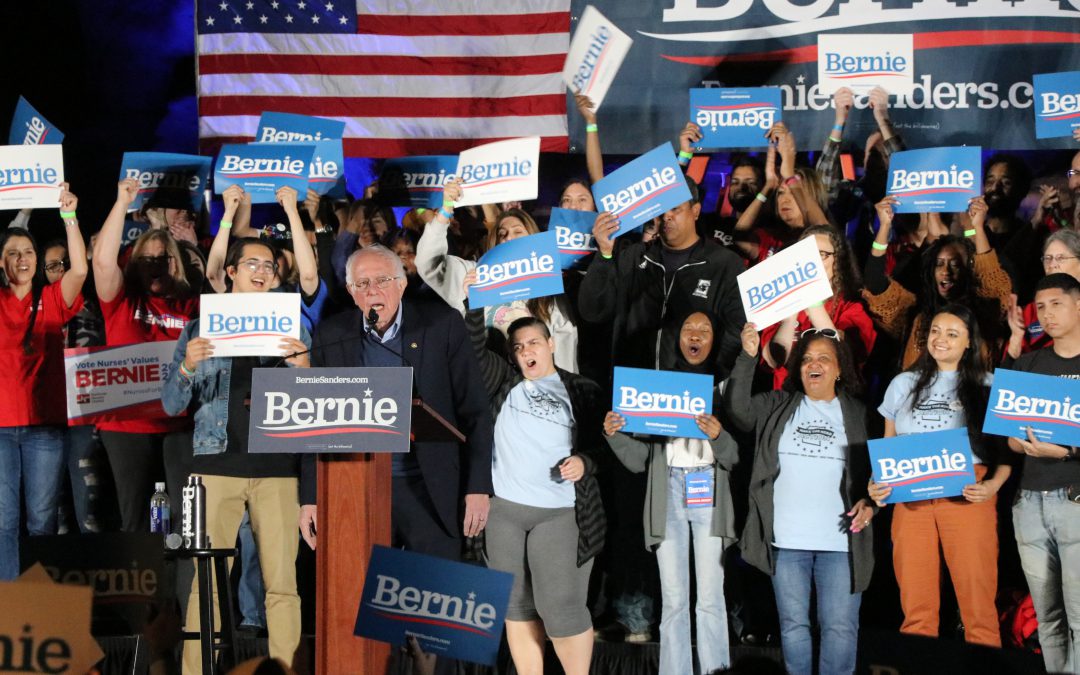 Bernie Sanders addressed supporters in Las Vegas the night before the Nevada Caucuses. He would claim a decisive victory the next day with overwhelming support from Latino voters. (Evan Ochsner/MNS)

LAS VEGAS — The Nevada caucuses had a starkly different demographic landscape from the contests in Iowa and New Hampshire, two states largely bereft of racial and ethnic diversity. And while the result was the same – a third win for Bernie Sanders, this time the front-runner could thank Latino voters for helping elevate him to victory.

Exit polls from The Washington Post and NBC News showed Sanders with a majority of Latino support and up to a 37-point lead over the next closest candidate, former Vice President Joe Biden.

Sanders’ campaign had been courting Latino voters for months, buying ads, deploying volunteers and honing a working class message his campaign believed would win over the Latino voters who comprise nearly 30% of the state’s population.

As the nomination contest moves on to South Carolina and Super Tuesday, the Latino vote could play a pivotal role in the outcome.

On Super Tuesday, 15 states and territories will divide up 1,357 delegates. The two biggest prizes of the day – and of the primary – are California and Texas, where Latinos make up 30 percent of eligible voters, according to the Pew Research Center.

Roxanne Perez-Guzman voted in her first presidential election Saturday in Nevada. She caucused for Sanders and volunteered with his campaign.

“I believe that Bernie has the most progressive campaign,” Perez-Guzman said at a Sanders event the night before the caucuses.

Perez-Guzman’s mother emigrated from Mexico and her father from Cuba. She brought her parents to Sanders’ event and said she is most attracted to his campaign because of his immigration policies. Sanders has called for wide-ranging immigration reform and the abolishment of Immigration and Customs Enforcement.

But Sanders’ appeal to Latino voters goes beyond his immigration policies. His campaign has staked its legitimacy on the readiness of voters to embrace a liberal agenda to the left of any of his rivals. Many Latinos in Nevada said they felt disaffected by a political and economic system they believe has failed them. They sought a candidate who could upend that system.

After the event, Shakir said Sanders’ progressive proposals like Medicare for all, free college and expanded union rights will increase the campaign’s appeal to the working class. Sanders’ support among the that group has been central to his strong showings in the first three states.

Sanders’ campaign has said it believes Latino support can continue to be a central part of its coalition.

“When you look at the Latino community in the United States right now, this is the working class of America,” Shakir said after the event.

Geraldine Duenas and her husband caucused for Sanders. For them, the high cost of health care in the U.S. has made Sanders’ proposal for a publicly funded universal coverage option increasingly appealing as it has for many Americans who struggle to afford medical expenses.

“Right now, I have a son who’s 20 who can’t afford healthcare on his own,” Duenas said. “I struggle paycheck to paycheck.”

Erica Castro, organizing manager of the Progressive Leadership Alliance of Nevada, said some campaigns, like Sanders’, have dedicated resources to courting Latino voters and hiring Latinos onto their staffs. But two candidates whose polling numbers with minority voters have teetered between abysmal and nonexistent have been conspicuously absent from Nevada, she said.

“Honestly, I haven’t had any interaction with Amy Klobuchar’s campaign here, very little with Mayor Pete’s campaign,” she said.

Part of the reason is resource limitations, as Klobuchar dedicated money and time to Iowa and New Hampshire before saying she was pivoting to Super Tuesday.

Buttigieg, meanwhile, has repeatedly said minority voters will support him once they get to know him better. But he was the only major candidate running in Nevada who did not send a surrogate to the immigration forum or attend in person.

Biden, once the favorite to win, has continuously claimed his popularity among minorities will energize a campaign weighed down by disappointing finishes in the first two states.

Biden was indirectly assisted by Nevada’s powerful Culinary Union, which said Sanders’ health care proposal would strip its members of their coverage. Fifty-four percent of the union’s members are Latino.

Biden finished second in Nevada, and multiple exit polls showed him having the second-most support among Latinos. He was also the only other candidate to win a precinct with a majority-Latino population, according to an analysis by the Latino Politics and Policy Initiative at the University of California Los Angeles.

But as the campaign trail now winds through states with far more diversity than Iowa and New Hampshire, candidates will need to prove they can create a coalition of Democrats of many races and ethnicities.

“There is no one better running right now that has done more for minorities,” Amy Wiwuga, a Biden volunteer said. “I feel as a minority he will have our back.”

While Democratic candidates have been jockeying for Latino support in the primary, the nominee will need to retain or increase their support in the general election. A Telemundo poll released late last year found 25% of Latinos said they would vote to give President Donald Trump a second term. 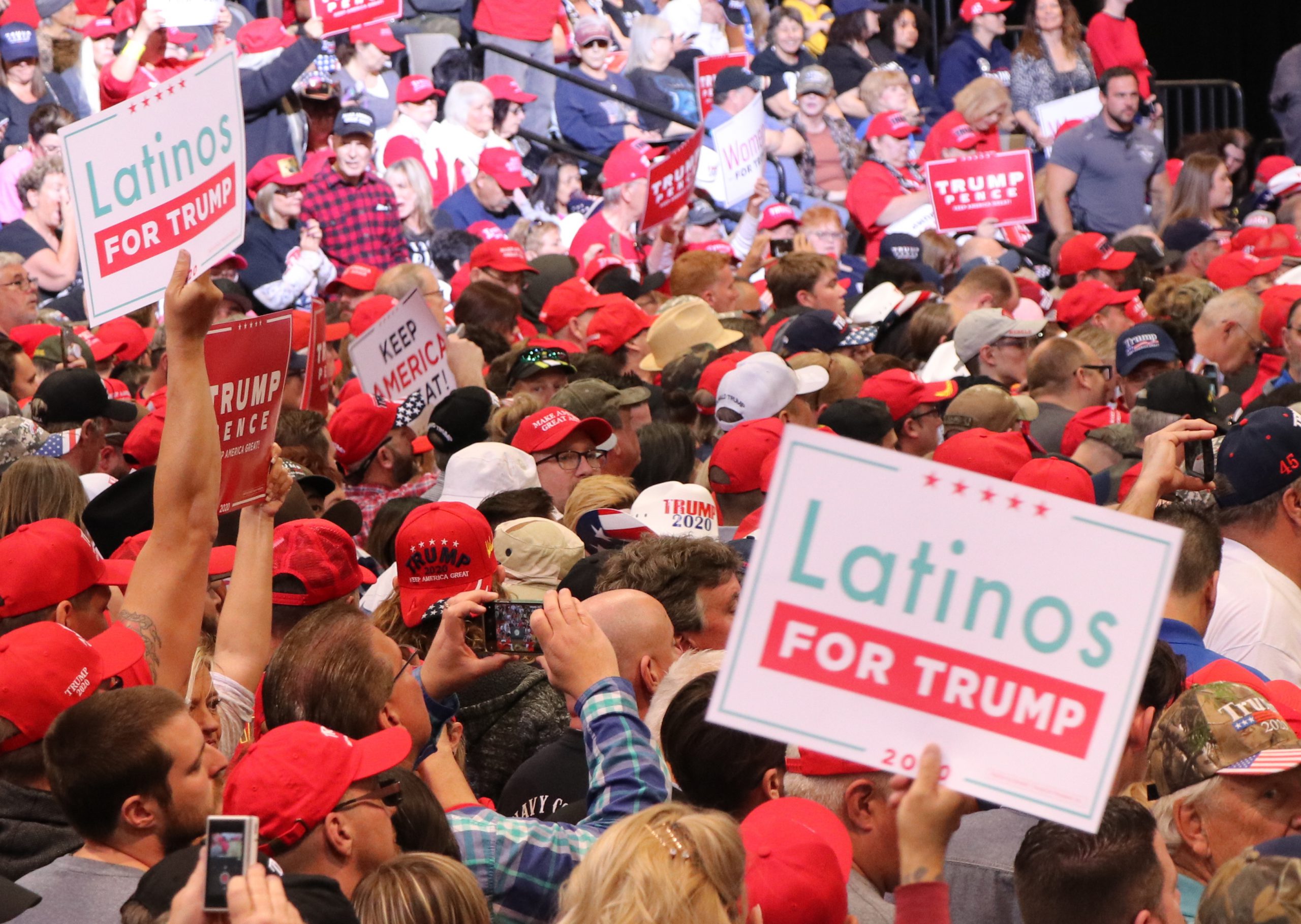 Latinos’ support for the president defies the xenophobic comments he has made about them that extend to the beginning of his presidential campaign when he called Mexicans “rapists.”

“It’s only the Democrats that spin it around and make it seem like it’s bad,” Natalie Hernandez said at a Trump rally in Las Vegas where supporters brandished “Latinos for Trump” signs. “But you know what? He didn’t say anything that offended me.”

Many Latinos there said they were pleased by the strength of the economy and his conservative stances on domestic issues.

Even Trump’s stringent policies on immigration have earned him the support of some Latinos.

“Most of the Latinos are conservatives,” Hernandez said, although the Pew Research Center says 34% of Latinos identify with the Republican Party. “They don’t vote for abortion. They don’t vote for open borders, believe it or not, because the illegals come in and take over the jobs of the American-Mexicans that live here.”

Two days before an underwhelming finish at the Nevada caucuses, Tom Steyer told reporters the Democratic nominee will need to prove his or her ability to engage a wide range of voters. Steyer himself has spent tens of millions of dollars in Nevada and South Carolina in an effort to court minority voters.