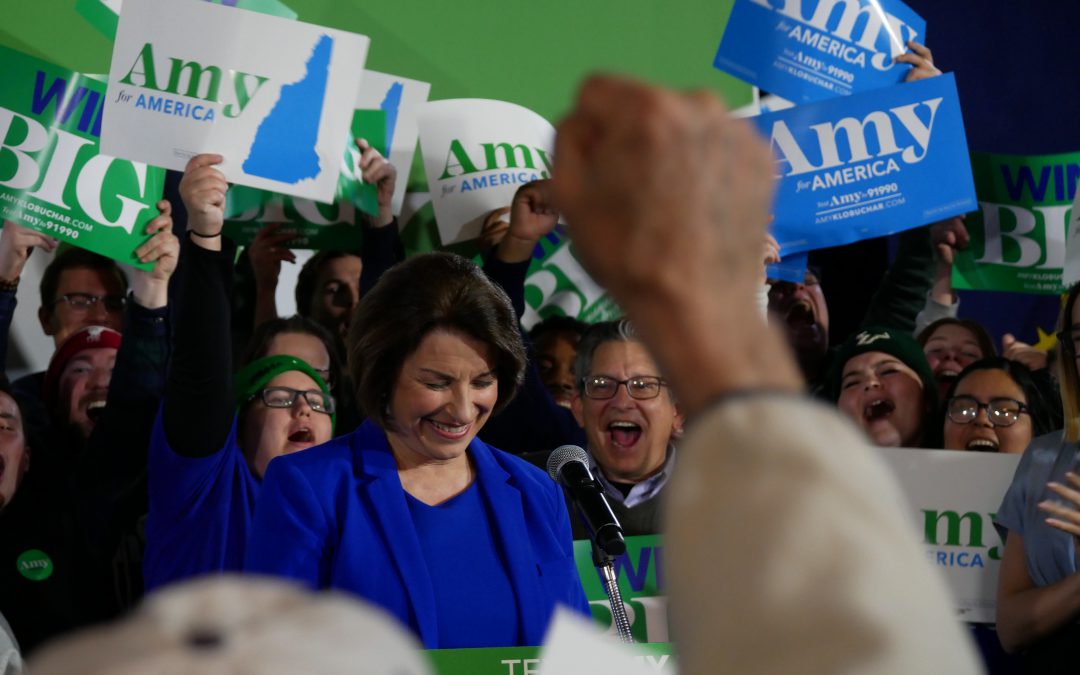 CONCORD, NEW HAMPSHIRE – There is a medal for third place, at least sometimes.

Sen. Amy Klobuchar clearly thought so. The Minnesota Democrat was all smiles as she took the stage at a Concord convention center Tuesday night.

With 87 percent of precincts reporting, Klobuchar claimed just under 20 percent of the vote, putting her the closest she’s ever been to frontrunners Sen. Bernie Sanders of Vermont and former South Bend, Indiana Mayor Pete Buttigieg and eclipsing Massachusetts Sen. Elizabeth Warren.

“The Klomentum is definitely with her,” said Jeff Hayes, a D.C. resident and long-time supporter who traveled north to attend the candidate’s primary night event.

Until yesterday, polling averages had never put Klobuchar above 10 percent nationwide. At the Iowa caucuses, she received only a single delegate, placing her inside but firmly at the bottom of a cohort of candidates including Sanders, Buttigieg, Warren and former vice president Joe Biden. Her campaign chest remains among the smallest in the race.

But Klobuchar earned high marks for her performance at Friday’s Democratic debate and basked in the afterglow of public attention – including the adoration of a group of Scandinavian tourists jokingly dubbed her “Danish fan club,” some of whom attended Tuesday night’s event.

Polls conducted Feb. 8-9 by Suffolk University put her in double digits in New Hampshire and within 5 points of Buttigieg.

The gap between the candidates proved to be accurate, but not the numbers: the two moderates exceeded expectations in New Hampshire, denying Sanders a clean break from the pack while also tightening the bottleneck on lower-polling candidates.

In her primary night speech, Klobuchar doubled down on her image as a unifier, promising to build a coalition of Democrats, independents and moderate Republicans to challenge President Donald Trump.

“In the end, we know what unites us is so much bigger than what divides us,” Klobuchar said.

It was a message well-suited for New Hampshire, known for its independents and independent thinkers and for its history of elevating underdog candidates.

“In all those years I covered the statehouse, I realized that if you did not buy into more than one ideology, things did not last,” Love said.

Love endorsed Klobuchar in letters to the editor in the Concord Monitor and the New Hampshire Union-Leader.

Margo Burns, a Manchester resident and seventh generation New Hampshirite, said she had voted for Sanders in the primary four years ago but had switched to Klobuchar for her demeanor and potential to grow the Democrats’ camp.

“She is so strong and sweet and kind. And I have no reason to go any place else,” Burns said.