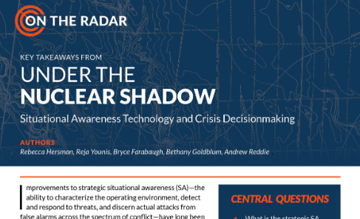 WASHINGTON—American national security is threatened by rapid technological advances that often are not understood by the leaders who have to make decisions on deploying nuclear weapons or other life-threatening actions, two nuclear threat experts said Tuesday.

New America Senior Fellow Peter Singer said American strategic planning is affected by the growth of artificial intelligence, miniaturization, robotics, social media and satellites. These technologies raise “legal or ethical questions that were very much science fiction a generation ago,” he said.

Citing a recent incident in which the U.S. military’s movement of missiles was revealed by civilians on social media, Singer spoke of an “information asymmetry” America has compared with some other nations.

Columbia University professor Robert Jervisalso said that “more information may not be better.” Nuclear decision makers have access to more information and technology now than ever before, but, said Jervis, this could cause additional problems.

“There’s usually a real gap between people who design [information systems] and the people who use them,” he said. “Most warning systems are made by people who are very technologically skilled,” but who sometimes struggle to make those systems easy for non experts to use.

Singer said nuclear information technology – AI and algorithms especially – are “a technology where, inherently, we can’t explain why it comes to that conclusion and, in turn, it can’t explain why it came to that conclusion.” Because politicians are held publicly accountable for their decisions, not knowing how an algorithm reached an output makes that information processing more stressful, he said.

A lack of understanding of an algorithm can increase an already stressful situation like an imminent nuclear crisis to paralyzing levels of stress.

With the influx of information also comes uncertainty. Intelligence has “moved from a world where it’s about trying to get information for situational awareness to ‘there’s lots of information out there, what do I trust?” said Singer. “I don’t think policymakers are ready for that.”