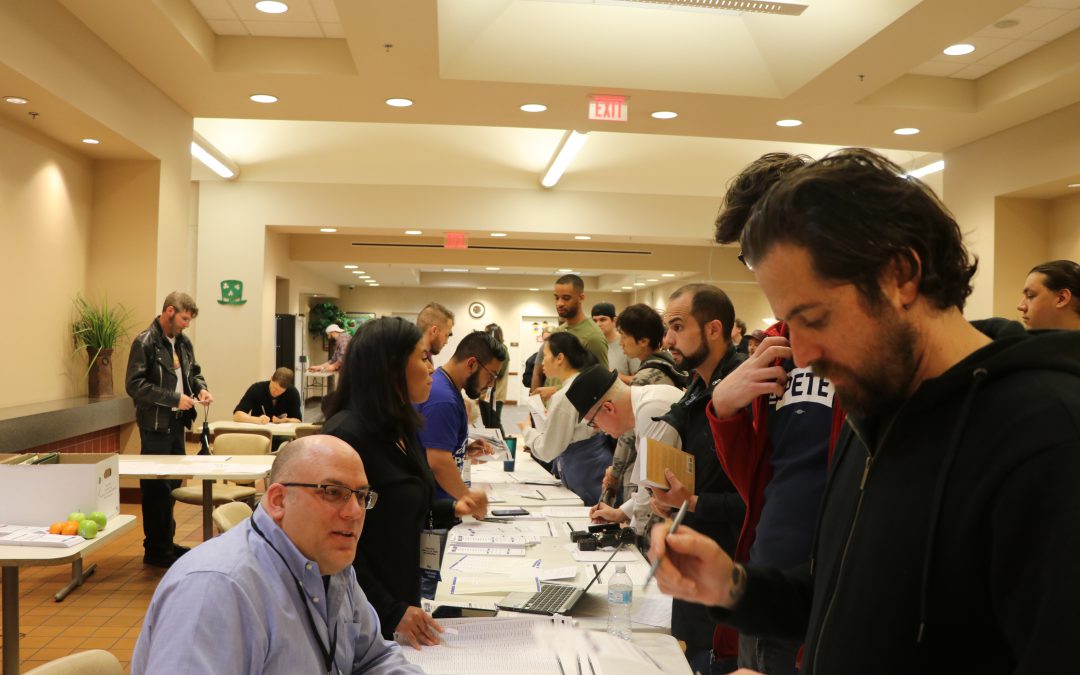 Caucus volunteers check in caucus goers at the East Las Vegas Community Center, one of 200 caucus sites across the state. (Evan Ochsner/MNS)

LAS VEGAS – More than 80 employees at Harrah’s Las Vegas Hotel and Casino used their lunch break on Saturday to vote in Nevada’s Democratic caucus. State party officials use such examples as proof that the caucus system worked, but critics say too many voters still were left out of the process.

The employees were given lunch boxes and were greeted by young campaign volunteers attempting to win them over. As the workers sat on the floor and ate their chips and sandwiches, they listened to instructions in both English and Spanish.

Within about 30 minutes, the caucuses at Harrah’s was complete and the diverse coalition of workers rushed back to their jobs.

Harrah’s was one of seven locations on the Las Vegas Strip that hosted a Democratic caucus this year. The locations on the Strip were added to open the process to more working-class voters, part of a broader effort to modernize a system that many have said was not accessible to large portions of the electorate.

“I am grateful to the NV Dems team who worked with community leaders to secure caucus day locations that will serve every Nevada Democrat from our tribal communities in East Las Vegas to our vast rural counties,” State Democratic Party Chair William McCurdy II said in a statement.

Another major change this year was the addition of early voting in the four days leading up to the caucuses to include voters who would not have been able to set aside the time needed to participate in a caucus.

The state Democratic party said close to 75,000 Nevadans cast early ballots this year, close to the 84,000 total votes cast in the 2016 Democratic primary. 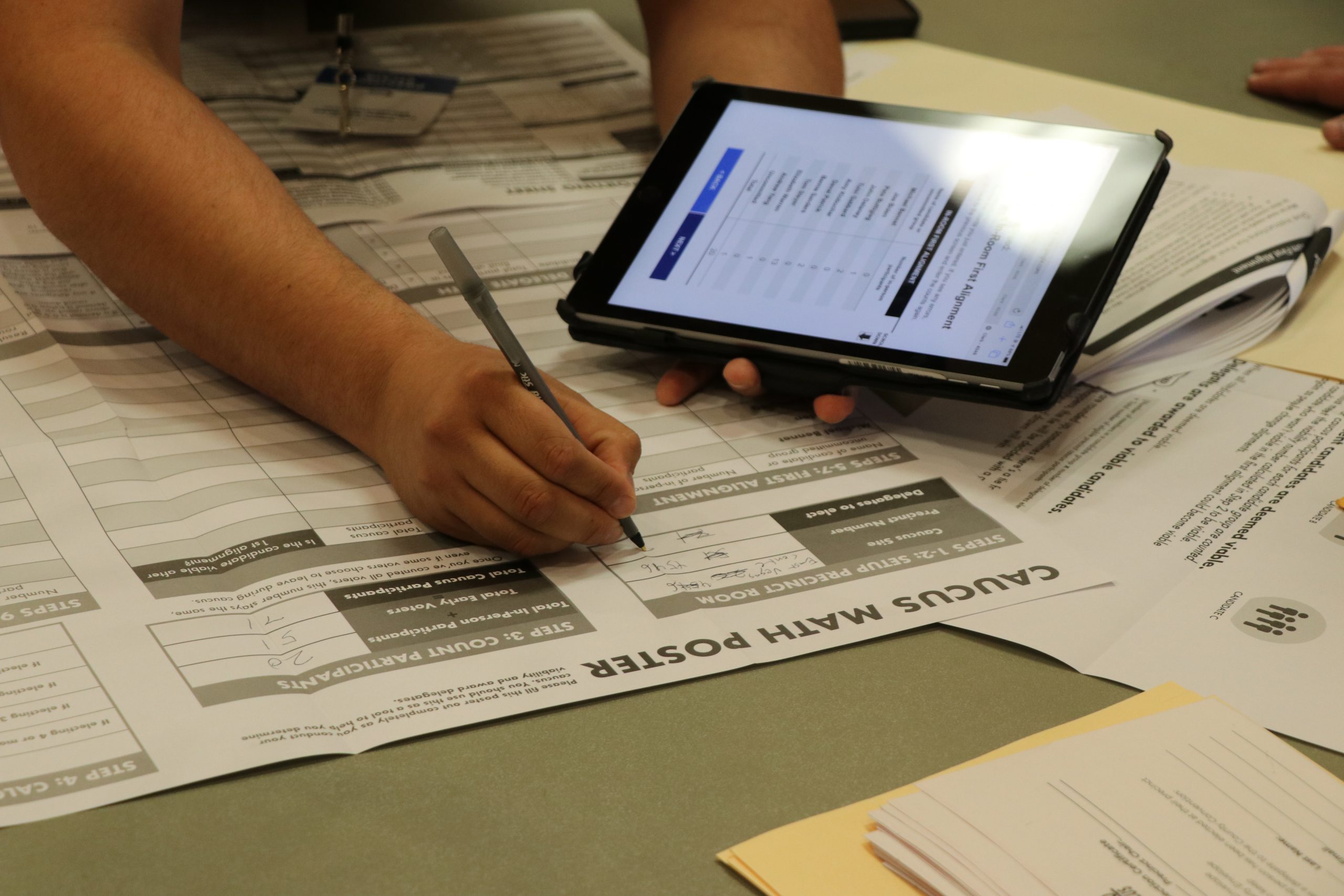 A precinct captain copies data from an iPad. The iPads were a new addition this year and were used to bring early voting results into the in-person caucuses. (Evan Ochsner/MNS)

But some say the caucus system still leaves out certain groups.

Erica Castro, organizing manager of the Progressive Leadership Alliance of Nevada, said the caucuses are still not accessible for many Nevadans and that the state should eventually move to replace the caucuses with a traditional primary.

The popularity of voting early this year shows it would be in the best interest of Nevadans to discontinue the caucuses altogether, Castro said.

Nevada is the third state to cast votes in the primary cycle, but it is the first state with a substantial number of minority voters. According to the latest U.S. Census Bureau statistics, the state is nearly 30% Latino and 10% Black.

Many of the workers in hotels and casinos on the strip are members of minority groups.

The Culinary Workers Union is the largest union in Nevada. With over 60,000 members, the Culinary Union claims to be the largest political force in the state. The union’s membership is 54% Latino and 55% female, said spokeswoman Bethany Kahn.

The union has provided opportunities for its members to get involved and get to know what each of the Democratic nominees stand for.

Khan said the Culinary Union held seven town halls with candidates so members could weigh in on the issues important to them.

The Culinary Union also served as an early voting location. According to Khan, 2,500 voters came to the union to cast an early ballot last week. Khan said that it is important that the state Democratic party is continuously looking for ways to include working class, minority voices.

In addition to questions over whether the caucus system is an inclusive and accessible way to vote, Iowa’s Democratic caucuses tried a new technology – a phone app to count and record votes – that broke down, leading to a days’ long delay in declaring a winner. The chairman of the state Democratic party eventually decided to step down.

Following the debacle in Iowa, Nevada decided not to use the app. Instead, the state Democratic party amended its own system and used an iPad to bring early voting results into each precinct’s in-person caucus. Volunteers then phoned in the final results and texted a photo of the sheet they used to record results to party officials.

Volunteers at the East Las Vegas Community Center said they were pleased with the amended process and didn’t report any major problems.

“From my perspective, everything went really well,” precinct chair Alfonso Ruiz said. “It was easy to participate.”

Ruiz said he understood that caucuses were not accessible to all voters, but that the process helps to build party organization and loyalty.

But President Donald Trump from weighed in on the caucus system in Nevada at a rally in Las Vegas the day before the caucuses.

“You know, they say they’re gonna have a lot of problems tomorrow,” Trump said. “I hear their computers are all messed up, just like they were in Iowa. They’re not going to be able to count their vote.”

The caucuses were called in favor of Sanders early Saturday evening, but as of Sunday, votes were still being counted. Party officials said that short delay was normal in a caucus system – and scored a victory for the system.