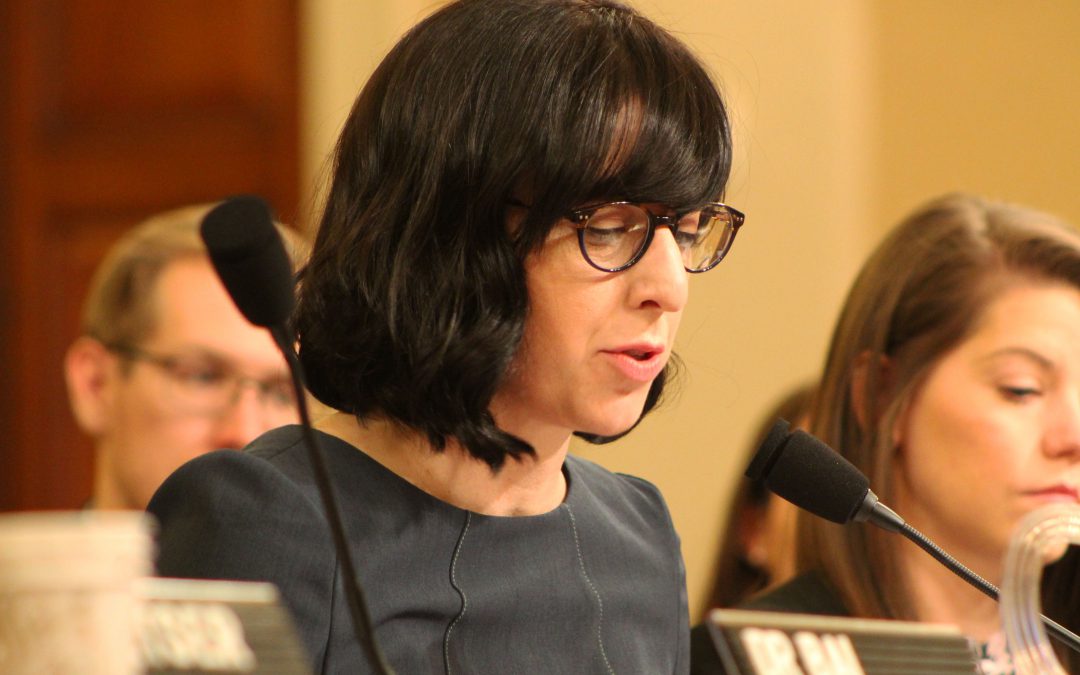 Juliana Keeping testifies before the House Ways and Means Health subcommittee begging for a bill that would lower prescription drug prices. (Angelina Campanile/MNS)

WASHINGTON — Juliana Keeping is overcome with mixed emotions every time she celebrates her son’s birthday. Eli, 7, has cystic fibrosis. Another year older means another $300,000 in medical bills.

“I’m deeply frustrated with the current system,” said Keeping, who testified before the House Ways and Means Health subcommittee Wednesday. “Congress must work to enact legislative solutions that would make drug costs affordable.”

Committee Chairman Rep. Lloyd Doggett, D-Texas, began the hearing by calling President Donald Trump a liar for saying in his Tuesday State of the Union address that efforts by his administration led to the first decline in prescription drug prices in 51 years. The president called on Congress to pass legislation that would further lower prescription drug prices but provided no details on how he would achieve that goal.

Keeping is able to pay Eli’s medical bills because of patient assistance programs, nonprofit organizations that cover a patient’s copays and coinsurances. The problem with relying on these programs, however, is that they are tied to the patient’s health insurance plan.

“Ninety-seven percent of all patient assistance programs require patients to be on insurance in order to participate,” Keeping said.

Uninsured patients have virtually no access to programs to offer such relief. In addition, those with better health care coverage will receive better assistance. If Keeping lost her job and the health insurance that comes with it, she would also lose the patient assistance program’s payments for Eli’s prescription drugs.

Keeping pleaded with Republican committee members to push for the Senate GOP majority to support H.R. 3, a bill the House passed last year that would require Medicare and Medicaid to negotiate with drug companies for fair and affordable drug prices.

H.R. 19, proposed by House Republicans, focuses on restructuring Medicare Part D. According to Tara Hayes, director of Human Welfare Policy at the American Action Forum, H.R. 19 could save the federal government $28.3 billion in reinsurance payments and beneficiaries and more than $10.6 billion in out-of-pocket costs.

Bai suggested that eliminating the free samples would lower drug prices and endorsed a bipartisan bill introduced by subcommittee members Reps. Judy Chu, D-Calif., and Devin Nunes, R-Calif., last year. The act would require drug manufacturers and other medical product suppliers to report to the Department of Health and Human Services the number and value of free drug samples given to clinicians each year, to be posted publicly.

Another contributing factor to high drug prices is the large and growing trade deficit in pharmaceutical products, according to Brad Sester, senior fellow for international economics at the Council on Foreign Relations.

Most of the United States’ leading pharmaceutical companies produce their most valuable drugs offshore in low tax jurisdictions like Ireland, he said, noting that $70 billion in pharmaceutical exports falls well short of covering $150 billion in imports. He added that pharmaceutical imports increased by around $40 billion over the last two years.

“The United States’ trade deficit in pharmaceutical products is now as large as America’s trade surplus in aerospace,” Sester said.