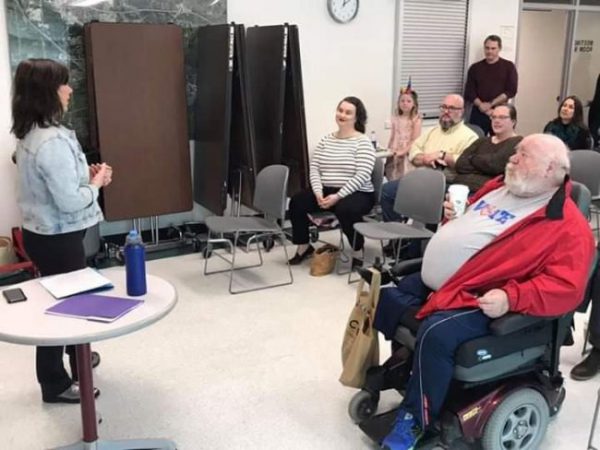 Harry Olmstead, 69, on the right. The Iowa Democratic Party still has not responded to his transportation accomodation request. (Photo courtesy Harry Olmstead)

DES MOINES — On a conference call one week before the Iowa caucuses, the state Democratic Party accessibility director recommended Harry Olmstead, a 69-year-old with a physical disability, bring his own chair to the caucuses in response to his question about additional seating.

Olmstead also asked for transportation for 11 from a skilled nursing home just a few blocks from the caucus site. He said he never got a response from Iowa Democratic Party and likely cannot caucus Monday night. Olmstead is disappointed he might not fulfill what he calls his “patriotic responsibility.”

The response reflects shortcomings in the accessibility efforts of both parties. Thirty years after the Americans with Disabilities Act passed, the disability community say the caucus system is still a barrier to voter turnout.

Caucusing can be taxing for people with disabilities. To caucus, Iowans have to show up to their designated caucus site at a designated time and stay through the end. Caucuses can last up to four hours and participants are generally expected to stand.

The state Republican and Democratic parties said they have been working to expand caucus accessibility. IDP has introduced a “Request for Accommodation” form, an early check-in option on caucus night, a satellite caucus option and a new accessibility director position, according to IDP Communications Director Mandy McClure. The Iowa GOP website also lists an email address and phone number to contact about accommodations.

But according to Jane Hudson, of Disability Rights Iowa, the Democratic Party only started to carry out accessibility plans in the few weeks leading up to the caucuses. Hudson only saw the “Request for Accommodation” form mentioned Jan. 14 on Facebook and Twitter. She said the party’s minimal, last-minute outreach efforts shut out Iowans in rural communities and Iowans without Internet access.

About 300 disabled Iowans have filled out the form. There are 300,000 disabled voters in the state. Hudson said many Iowans are still unaware the form exists.

The Democrats also only hired the new accessibility director till just a few weeks ago, she noted. Amanda Koski arrived in Iowa Jan. 16. The Democratic National Committee had asked the position be filled by October, said Hudson.

Koski has since been working through the hundreds of accommodation requests, but Hudson said the task of reviewing so many requests in so little time is near impossible.

“It’s very much a last-minute afterthought. It’s really a slap in the face to Iowans with disabilities,” said Hudson.

Hudson filed her own request the day the form was posted on social media. For Hudson, bright lights and loud sounds can trigger severe migraines. She asked for a dark room, which would effectively be an empty classroom at her caucus site. She’s received three confirmation emails her request was received, but still has not heard back. There’s no guarantee her request will be fulfilled.

The Democratic party’s hiring choice for accessibility director has also been repeatedly questioned by the disability community. Jenn Wolff, a member of the Disability Caucus, said she didn’t feel Koski was familiar with the language of the Americans with Disabilities Act. She also didn’t agree with the state Democratic party’s decision to hire out of state.

Wolff said it should’ve been Crist, who has been a veteran disability advocate for the state of Iowa for decades. Koski did not respond to multiple requests for comment.

In reality, the work has largely fallen on the disabled community to make satellite caucuses happen. All Emmanuel Smith got was a webinar login. In organizing their satellite caucus, Smith didn’t ask for much. They did the trainings, attended the conference calls, and filled out all the paperwork.

Smith made just two requests to the Democratic party — to permit digitally printed votes and to receive assistance with hanging up posters. Both inquiries were denied because they did not meet the grounds for a ‘reasonable request.’

“Democratic system can be rated by what degree marginalized people are empowered to participate,” said Smith. “The Iowa Caucus is not serving the people.”

“We wanted to create a caucus…focused on inclusion rather than accessibility,” said Reyma McCoy McDeid, the executive director of CICIL. “We feel compelled to have this satellite caucus and center disabled people in the planning of it and the execution of it.”

Carol Schroeder, 64, believes the CICIL inclusive/accessible caucus should be used as a model for all Iowa caucuses. She has been caucusing since 1984 and sees a day caucusing can be completely accessible.

On Monday night, Schroeder will caucus at the alternate CICIL site. She remembers the sheer pain of caucusing in 2012 and 2016 — waiting outside in the icy parking lot, standing for hours because of limited seating. Schroeder, who has osteoarthritis and cannot stand without support, used her walker to get through those caucusing nights. This year will be different, she said. This year, she is actually excited.