Bloomberg saw Sanders as his only viable threat. Then Warren announced her best fundraising hour. 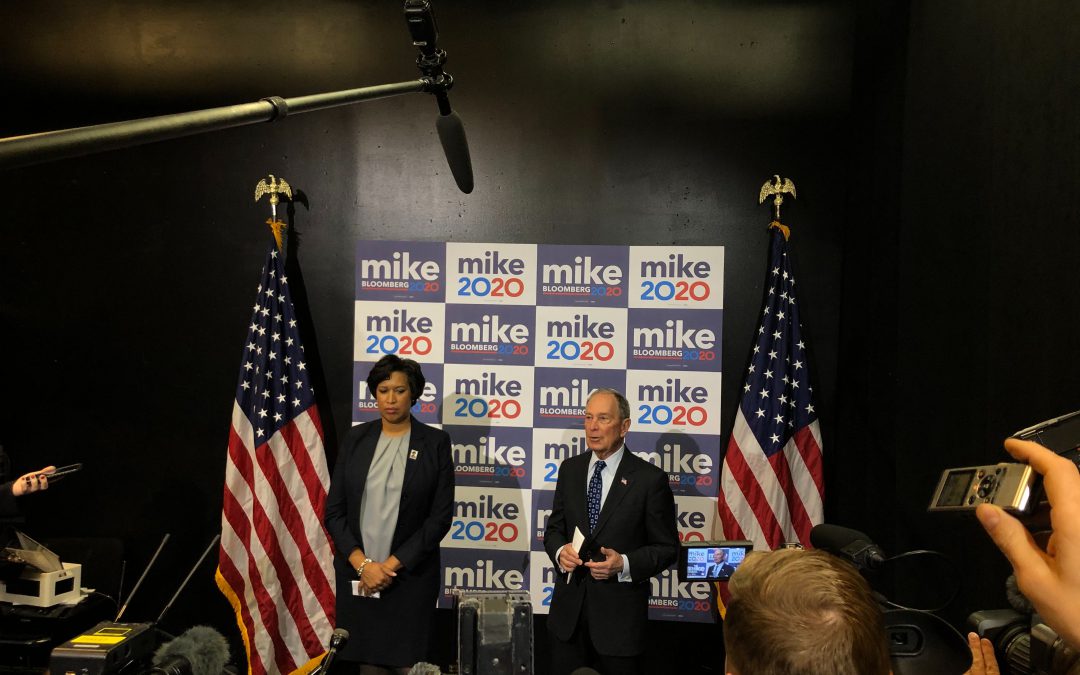 “Mike Bloomberg speaks at a Jan. 30 event in Washington, D.C., where Mayor Muriel Bowser endorses him for president.” (James Pollard/MNS)

WASHINGTON – Democratic presidential candidate Mike Bloomberg entered Wednesday night’s debate pitching the race as a two-person contest between himself and Sen. Bernie Sanders—and that of the two, the former New York City mayor is best equipped to defeat President Donald Trump in the general election.

But Sen. Elizabeth Warren threw a monkey wrench into his plans. With her first comment of the night, she criticized Bloomberg’s sexist language.

“I’d like to talk about who we’re running against,” the Massachusetts senator said. “A billionaire who calls women ‘fat broads’ and ‘horse-faced lesbians.’ And, no, I’m not talking about Donald Trump. I’m talking about Mayor Bloomberg.”

Warren’s strong performance on the stage in Nevada translated to fundraising success as her campaign announced its best fundraising hour of the primary. Her campaign said Thursday morning the hour netted $2.8 million, calling it the “best debate day of the entire campaign”

The fundraising boost could extend her campaign’s life after she canceled or moved more than $1.2 million in television ads last week in Nevada and South Carolina. After disappointing third- and fourth-place finishes in Iowa and New Hampshire, Warren is third in the total delegate count with eight delegates. Former South Bend, Indiana, Mayor Pete Buttigieg, leads with 23 delegates, followed by Sanders at 21 delegates.

Warren called out Bloomberg for his nondisclosure agreements with several former employees—whom he said might not have liked a joke he made. After the debate, some pundits questioned Bloomberg’s electability pitch after last night’s debate in Nevada.

CNN Political Commentator Andrew Yang, the businessman who recently dropped out of the presidential race, questioned the Bloomberg campaign’s preparation for the candidate’s first Democratic debate.

“I don’t think he was coached hard enough,” Yang said. “The fact that he did not have those answers at his fingertips lets me know categorically he was not properly prepared for this debate.”

But Bloomberg is banking on his “electability” strategy.

In an election cycle where 56% of registered Democrats and Democratic-leaning independents prefer someone who can defeat President Donald Trump even if they disagree with that candidate on most issues, according to a Monmouth University poll released earlier this month, the Bloomberg campaign is betting on voters to view Mike Bloomberg as that person.

“In prior elections, voters from both parties consistently prioritized shared values over electability when selecting a nominee,” Patrick Murray, director of the Monmouth University Polling Institute, said in a press release. “It looks like Democrats may be willing to flip that equation in 2020 because of their desire to defeat Trump.”

Dan Kanninen, the Bloomberg campaign’s leading states strategist, said Sanders and Bloomberg are the only candidates seriously poised to amass delegates on Super Tuesday. While Bloomberg hasn’t yet won any delegates because he skipped the early voting states, Kanninen pointed to a recent NPR/PBS Newshour/Marist poll that shows Bloomberg in second nationally with 19%, with Bernie Sanders at 31% leading the pack.

And the billionaire isn’t just surging nationally. Bloomberg is polling first or tied for first in several key Super Tuesday states. A poll released Feb. 18 has Bloomberg and Sanders tied in Virginia with 22% of the vote. In Oklahoma, Bloomberg leads with 20% of the vote. And with 19.6% of the vote in Arkansas he’s narrowly edging out former Vice President Joe Biden, Sanders and Buttigieg.

Bloomberg’s campaign has made a multi-million dollar bet on advertising, spending $464 million dollars to date. His rise in the polls comes after weeks of digital and television advertisements in these states.

The campaign is also looking past Super Tuesday. A poll released Feb. 13 has Bloomberg leading Florida—a state that will vote later in March—with 27.3% of the vote, followed closely by Biden at 25.9%. He’s opened 10 offices and has 110 staffers on the ground in Florida, a bellwether state Trump won in 2016 by a 1.2% margin.

Kanninen added the campaign plans to open 10 more offices in the Sunshine State by Super Tuesday. For these reasons, he said Bloomberg is the only candidate who can put Florida in play for Democrats in the fall.

“It’s not unfair to look at this election and look at what’s going to happen in the fall,” Kanninen told reporters on Tuesday during a conference call. “And you can easily say that the choice before Democrats, besides choice of other candidates and their record and what they stand for, is a choice of whether Florida will be in play in the fall or not.”

With Super Tuesday still 12 days away, there’s plenty of time for the state of the race to change. The 10th debate of the Democratic primary will take place on Feb. 25 in Charleston, South Carolina.

But on Wednesday in Nevada, Bloomberg tried to contrast himself with Sanders, the only other candidate Kanninen said has a shot at being “sworn into office next year.”

Bloomberg criticized Sanders, “the best-known socialist in the country,” for owning three houses.

Bloomberg said he’s been lucky to have made a lot of money. Sanders later responded, saying,“It wasn’t you who made all that money. Maybe your workers played some role in that, as well.”

During a discussion on wealth inequality, Sanders proposed putting workers on corporate boards. Bloomberg disagreed with the proposal, adding “we’re not going to throw out capitalism.”

“I can’t think of a way that would make it easier for Donald Trump to get re-elected than listening to this conversation,” Bloomberg said.