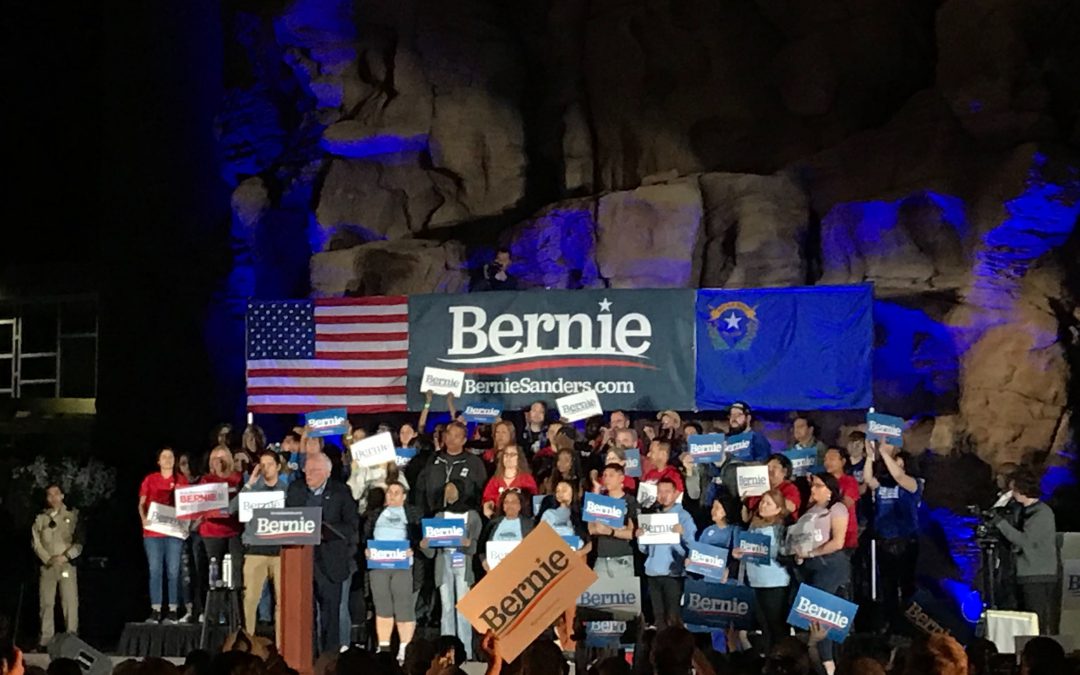 Bernie Sanders speaks to a crowd of 2,020 people Friday, the night before the Nevada Caucuses. (Evan Ochsner / MNS)

LAS VEGAS–Bernie Sanders won the Nevada Democratic caucuses Saturday by making it a campaign priority and investing resources in the state for months, his third consecutive win in the early primary and caucus states.

Sanders entered the contest after winning the most votes in both Iowa and New Hampshire, although Pete Buttigieg won more delegates in Iowa.

The Nevada caucuses were the first chance for the presidential candidates to test their support with a large number of minority voters. Nevada’s population is nearly 30% Latino and 10% African American.

Sanders was able to capture a majority of the Latino vote thanks to a large ground game that consisted of many Latino workers. This victory proves to critics that Sanders can win minority support, while the other candidates still need to show that they can gain support from the minority community.

The state’s Democratic Party created an early voting process in hopes of making the caucuses more accessible and increasing participation. Their reforms followed calls from the national party to eliminate caucuses after the 2016 election and a technological mishap in Iowa that prevented results from being reported accurately and quickly.

“From my perspective, everything went really well,” Alfonso Ruiz, a precinct captain and Sanders supporter, said. “It was really easy to participate.” Seven of the 200 caucus locations in Nevada were at casino-resorts on the Las Vegas strip. The state Democratic party added those locations so workers in hotels and casinos could vote easily during their shifts.

Boxes filled with pasta salad, sandwiches, cookies, chips and apples lined a table outside the caucus room in Harrah’s Las Vegas Hotel and Casino. Lunches were provided for the caucus-goers, most of whom arrived wearing their work uniforms during their lunch break.

Eleanor Cantu, a precinct captain and Harrah’s employee, said that she voted for Sanders because he looks out for union workers and their healthcare.

Sanders’ supporters in Nevada said they back him because they think he is genuine and agree with his progressive stances on many of the issues most important to them. Many supporters talked about his policies much more than they did about President Donald Trump, whom Sanders would face in the general election should he win the Democratic nomination.Sanders’ proposal for Medicare for all, a publicly-funded healthcare system that would provide health coverage for all Americans, is appealing to the working class voters he’s relying on to carry him to the White House.

“Right now I have a son who’s 20 who can’t afford healthcare on his own,” Geraldine Duenas said. “ I struggle to paycheck to paycheck.”

Democrats will vote in South Carolina in one week. On March 3, Super Tuesday, 15 states and territories will divide up 1,357 delegates. The two biggest prizes of the day will be California and Texas, where Sanders will hope his strong showing among Latino voters in Nevada will translate to victories in other states with large Latino populations.