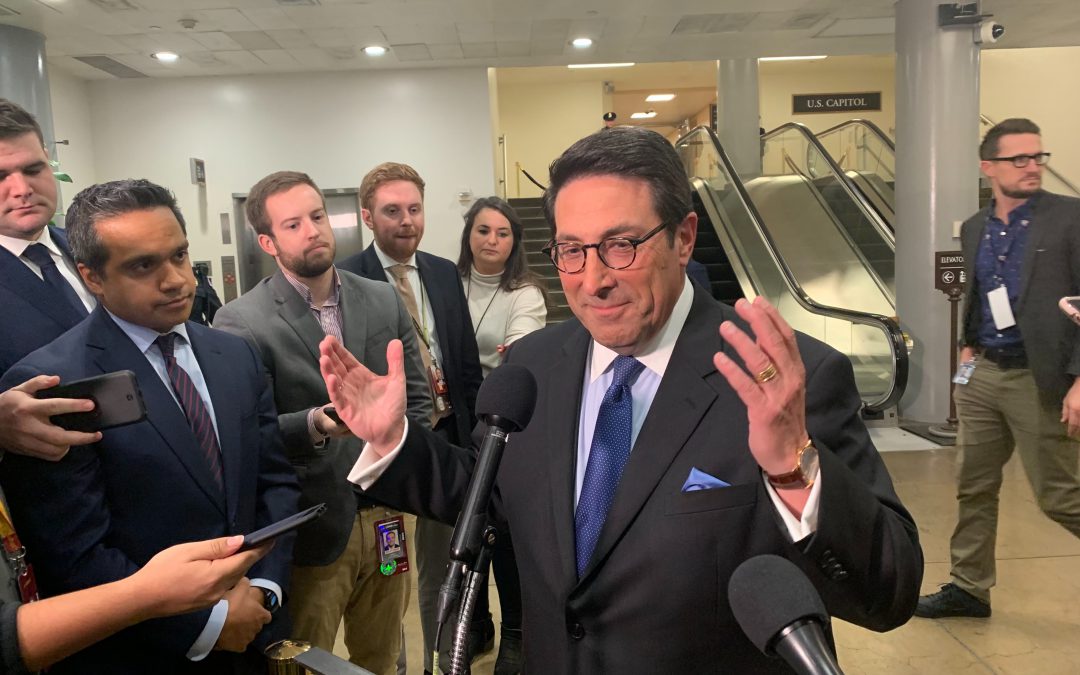 “Reject these articles of impeachment for our country and for the American people,” White House counsel Pat Cipollone said from the Senate floor.

The president’s legal team has tried to dissuade the Senate from issuing subpoenas for additional witnesses and documents since beginning its defense Saturday. They argue neither of the two articles of impeachment passed by the House is constitutionally valid.

In December, the House impeached Trump on charges of abuse of power and obstruction of Congress. The first charge relates to allegations that Trump withheld military aid to Ukraine in an effort to pressure the Ukrainian government to announce investigations into Hunter Biden, son of Democratic presidential contender Joe Biden.

The obstruction of Congress charge stems from the president’s efforts to prevent the House from successfully obtaining evidence from the White House during its impeachment inquiry.

In his presentation, Jay Sekulow, Trump’s personal attorney, dismissed the allegations of a quid pro quo between Trump and Ukrainian President Volodymyr Zelensky and argued that even if there was a quid pro quo, it would not be an impeachable offense.

“This is just about a phone call and a policy difference,” Sekulow said.

Lead House impeachment manager Rep. Adam Schiff, D-Calif., later said the president’s actions amounted to much more than a policy disagreement. Schiff and the other House impeachment managers spent nearly 24 hours last week arguing the president’s actions amounted to an impeachable offense. By contrast, the White House defense used less than half of its allotted 24 hours.

“Mr. Sekulow would have you forget what this case is about,” Schiff said. “This case is about a president of the United States shaking down the president of Ukraine by holding hundreds of millions of dollars of military aid and a covered up Oval Office meeting to get him help in cheating in the next election.”

The Senate trial will continue Wednesday with up to eight hours for senators to pose written questions to the House managers and president’s lawyers. Senators will have another eight hours to ask questions Thursday. According to the rules resolution passed by Republicans at the outset of the trial, the Senate will vote on whether to issue subpoenas after the question period.

A majority of senators is needed to vote in favor of admitting documents and witnesses. Democrats need four Republicans to vote yes to get to 51. It has been widely speculated that Republican Sens. Susan Collins of Maine, Lisa Murkowski of Alaska, Mitt Romney of Utah, and Lamar Alexander of Tennessee are the most likely to flip.

“The reports about John Bolton’s book strengthen the case for witnesses and have prompted a number of conversations among my colleagues,” \ Collins wrote in a statement Monday.

Alexander’s press secretary said Tuesday the senator plans to wait to hear the rest of the arguments, questions and answers before deciding how to vote on witnesses.

“We’re going to listen to the answers to questions, study the record, and then we’ll see if we need more evidence at that point,” \ Alexander wrote in a statement. “I’ll make my decisions after I hear all of them.”

Most Republican senators, however, projected unity in their opposition to calling witnesses. After Tuesday’s closing arguments, multiple senators said they were unlikely to vote for calling additional witnesses.

“I’m ready to vote not to have witnesses,” Sen. Kevin Cramer, R-N.D., said. “I see no value in protracting this nonsense.”

Democrats’ calls for witnesses have only intensified since the trial began last week.

On Sunday, The New York Times obtained a portion of a manuscript from former National Security Adviser John Bolton’s upcoming book. The leak supports Democrats’ argument that Trump’s withholding of military aid was contingent on whether Ukraine investigated the Bidens.

Bolton’s lawyer said in a statement that the manuscript was leaked after it was submitted to the National Security Council for a standard, prepublication review.

Bolton’s memoir, “The Room Where It Happened,” is set to be released Mar. 17.

Democrats hope to subpoena Bolton, acting White House Chief of Staff Mick Mulvaney, and others who had knowledge of the president’s actions surrounding Ukraine.

Earlier Tuesday, Minority Leader Chuck Schumer said the Democrats are not interested in participating in a “witness trade” suggested by some Senate Republicans. It is critical that the Senate hears from Bolton in order for them to find the truth, Schumer said.