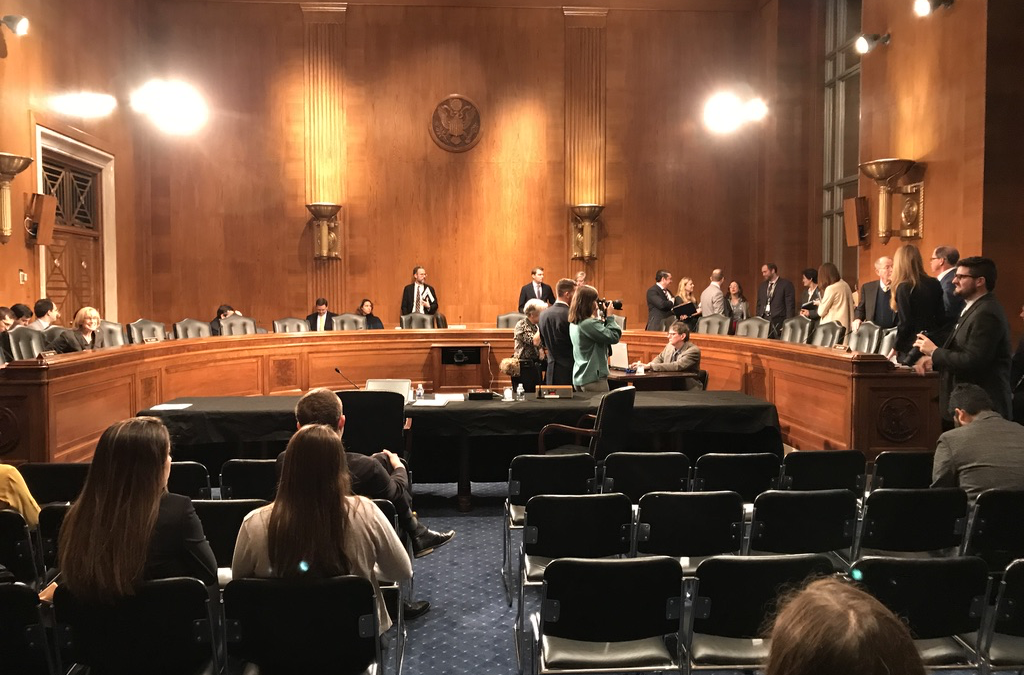 The Senate Committee on Health, Education, Labor and Pensions on Wednesday reported the USMCA favorably by a vote of 22-1. (Benjamin Rosenberg/MNS)

WASHINGTON — The full Senate looks on track to approve the U.S.-Mexico-Canada Agreement this week, after the last four Senate committees considering the trade deal advanced it Wednesday.

Republicans in the Senate are aiming to push USMCA through before the start of President Donald Trump’s impeachment trial, which is expected to come Tuesday. Several top Republican senators have signaled a Thursday vote appears likely for the Trump administration’s replacement for NAFTA, and floor debate on the pact was underway on Wednesday afternoon.

“The single most important step the United States could take in 2020 to further improve a growing economy is certainty in our trade agreements,” said Republican Sen. Lamar Alexander of Tennessee, chairman of the Senate Health, Education, Labor and Pensions Committee.

Seven Senate committees have had to sign off on the massive trade deal after a procedural move. Alexander’s panel and the committees for appropriations, foreign relations and commerce all voted for it on Wednesday morning. On Tuesday, the Senate Budget Committee and the panel for the environment and public works backed the deal. The Senate Finance Committee was first to approve it on Jan. 7.

The Democratic-led House of Representatives passed USMCA by a 385-41 vote in December.

Despite pressure from more liberal members of the chamber, such as Sen. Bernie Sanders, the independent lawmaker from Vermont, many Democrats are supporting the agreement after changes were made to strengthen labor and environmental protections.

Democratic Sen. Chris Coons of Delaware, who sits on both the foreign relations and appropriations committees, argued that the bill is the best option on the table, and that the changes will raise the bar for future trade deals in Democratic administrations.

“I’m willing to take the improvements,” Coons said. “And, frankly, this is just part and parcel of a larger debate we’re having about whether we should make the perfect the enemy of the good.”

Democratic Sen. Tim Kaine of Virginia, a member of the Senate Foreign Relations Committee, also pointed to the new labor and environmental regulations as key to getting Democrats to give the Trump administration a trade deal it badly wanted.

The labor-related changes included strengthening Mexican workers’ ability to unionize, which likely would cause wages to increase, and a formal committee to hold Mexico to its commitment, according to the Congressional Research Service. The pact also now would provide more protections for fish and other marine life, with stricter penalties to prevent overfishing.

Democrats and Republicans alike said the deal represents an improvement over the North American Free Trade Agreement, which has been in effect since 1994. USMCA includes a chapter on digital trade that was not included in Nafta, and it gives dairy farmers more market access, an issue especially important to Democratic Sen. Tina Smith of Minnesota.

Smith, who serves on the HELP panel, said her home state’s economy is a microcosm of the national economy in that agriculture is the foundation, but manufacturing and importing also play big roles.

“There are so many ways that trade is integral to our state’s opportunity to grow and to thrive,” Smith said. “There are provisions in this bill that will help Minnesota dairy even the playing field with our friends and partners in Canada.”