Senators sworn is as jurors as trial gets under way 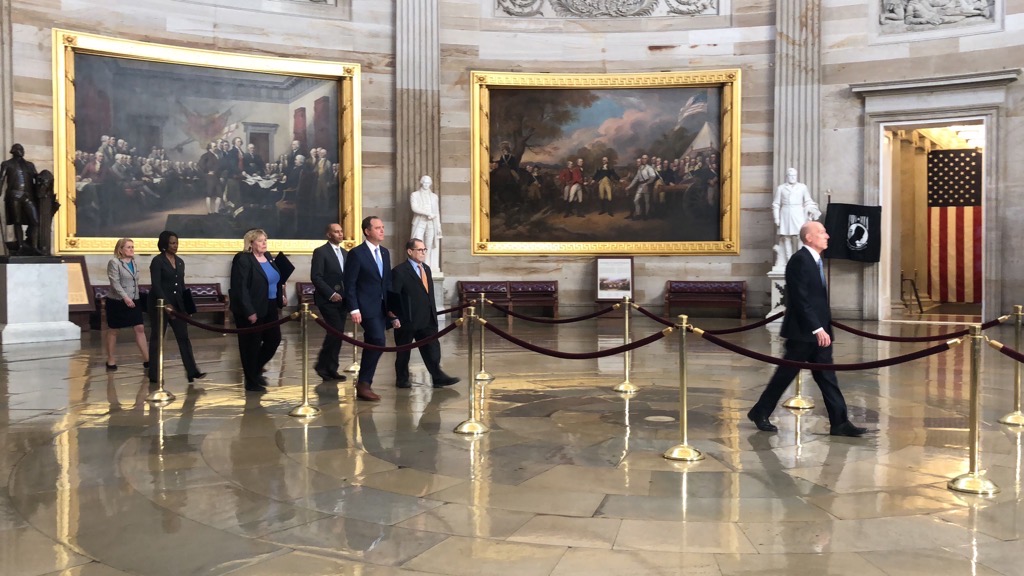 WASHINGTON – Stating that senators should render “impartial justice according to the Constitution and the laws,” Chief Justice John Roberts on Thursday administered an oath to senators for President Donald Trump’s impeachment trial.

Nearly a month after the House of Representatives passed two articles of impeachment against the president, Roberts asked all members of the Senate to raise their right hands and take the oath that would make them jurors. The trial is expected to begin with oral arguments Tuesday at 1 p.m.

The Senate clerk after the oath called Senators up alphabetically to sign their names to the “oath book.”

That resolution will likely allow time for Trump’s legal team and the impeachment managers appointed by the House Wednesday to present their cases. Senators will have the opportunity to submit written questions for either side that will be presented by Roberts.

Trump has until 6 p.m. on Saturday to send the Senate his written response to the articles. The president and the House of Representatives will have the opportunity to file trial briefs by early next week.

The decision on whether to call witnesses will be made later in the process, McConnell has said. It takes approval from 51 senators to call a witness, meaning Democrats would need to garner support from at least four Republicans to call any witnesses.

McConnell has thus far rebuffed Democrats’ requests to include witnesses in the initial rules package. On Monday, he called the witness question a “more contentious issue” and said the decision will hang on the “feeling of the Senate.”

“We’re going to vote on that at the appropriate time after we listen to the arguments,” McConnell said.

Democrats’ calls for witnesses have gained traction over the course of the week. On Tuesday, House Democrats released evidence related to Lev Parnas, a central figure in Trump’s efforts to pressure the Ukrainian government. In an interview Wednesday night, Parnas further implicated Trump as well as Vice President Mike Pence, Secretary of State Mike Pompeo and Attorney General William Barr.

From the floor of the Senate Wednesday evening, McConnell called on his colleagues to put aside the partisan squabbling of previous weeks.

“This is a difficult time for our country, but this is precisely the kind of time for which the framers created the Senate,” he said. “I’m confident this body can rise above the short term-ism and factional fever and serve the long-term best interests of our nation.”