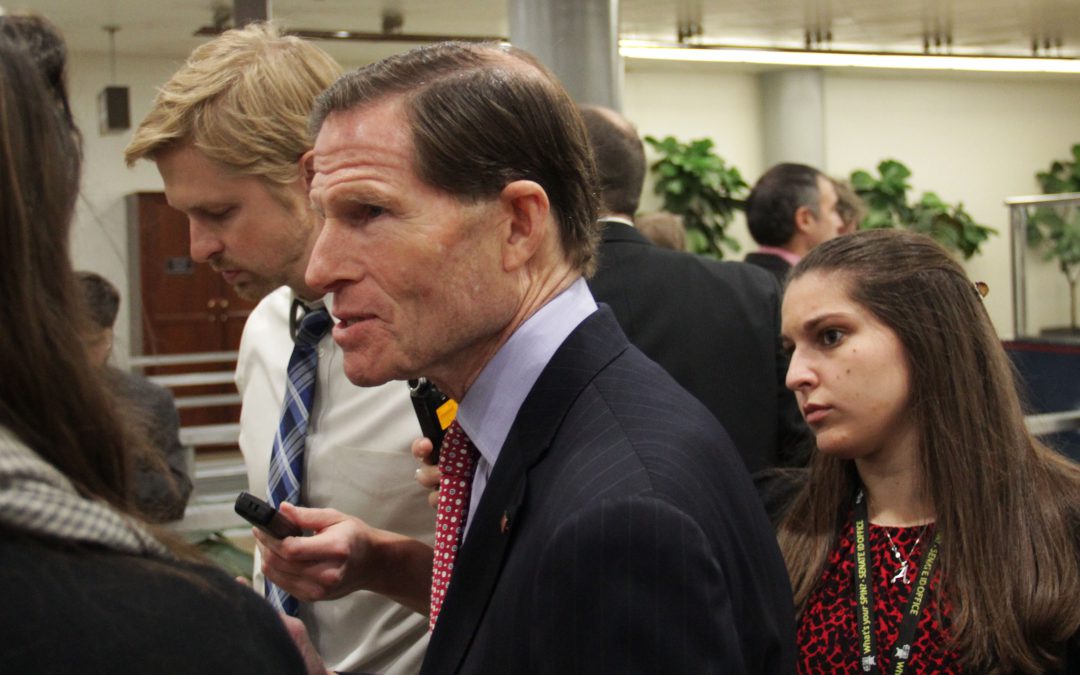 Sen. Richard Blumenthal, D-Conn., tells reporters "It’s outrageous that the press is doing the investigative work that the United States Senate is too cowardly to do." (Zamone Perez/MNS)

Sen. Lisa Murkowski, R-Alaska, said Friday morning she would vote ‘no’ in the referendum to subpoena more witnesses and testimony. Democrats counted on Murkowski to be one of four Republicans needed to get to the 51 votes needed to allow witnesses. The others said they had hope for Sen. Mitt Romney, R-Utah, Sen. Susan Collins, R-Maine, and Sen. Lamar Alexander, R-Tenn.

Alexander issued a statement Thursday night saying he would be voting against witnesses.

“There is no need for more evidence to prove something that has already been proven and that does not meet the United States Constitution’s high bar for an impeachable offense,” the statement said. Alexander, however, recognized the president’s actions were “inappropriate.”

“I appreciate Senator Alexander recognized what the facts are but I’m super scared that the precedent he set will allow every Democratic and Republican president to now manipulate foreign policy for their personal benefit,” said Sen. Chris Murphy, D-Conn.

The majority vote against calling further evidence allows the Senate to move forward with the final vote on the removal or acquittal of the president. Voting to acquit Trump will conclude the hearing, making it the shortest impeachment trial at two weeks long.

“A trial without witnesses is not a trial at all,” said House impeachment manager Rep. Adam Schiff, D-Calif. “The question before you [the Senate] today is who do you want to be, someone who hears the truth or someone who doesn’t want to hear it.”

Bolton’s unpublished book says Trump told Bolton to set up a meeting between Ukrainian President Volodymyr Zelensky and Trump’s personal lawyer Rudy Giuliani to discuss the investigations. The article reported this request was made more than two months before the July 2019 phone call between Trump and Zelensky.

“It’s outrageous that the press is doing the investigative work that the United States Senate is too cowardly to do,” said Sen. Richard Blumenthal, D-Conn.

Republicans said they were concerned the trial would have been endless if they had decided to accept witnesses.

“It’s not like we’re out fighting on the front lines, it’s not like we’re putting out fires,” Murphy said. “We’re sitting in our seats in an air-conditioned Senate chamber. Why are people complaining about having to work? This doesn’t involve any risk or sacrifice on our part to just do our job.”

Closing arguments are expected to start on Monday and the vote on whether to acquit the president is expected Wednesday.