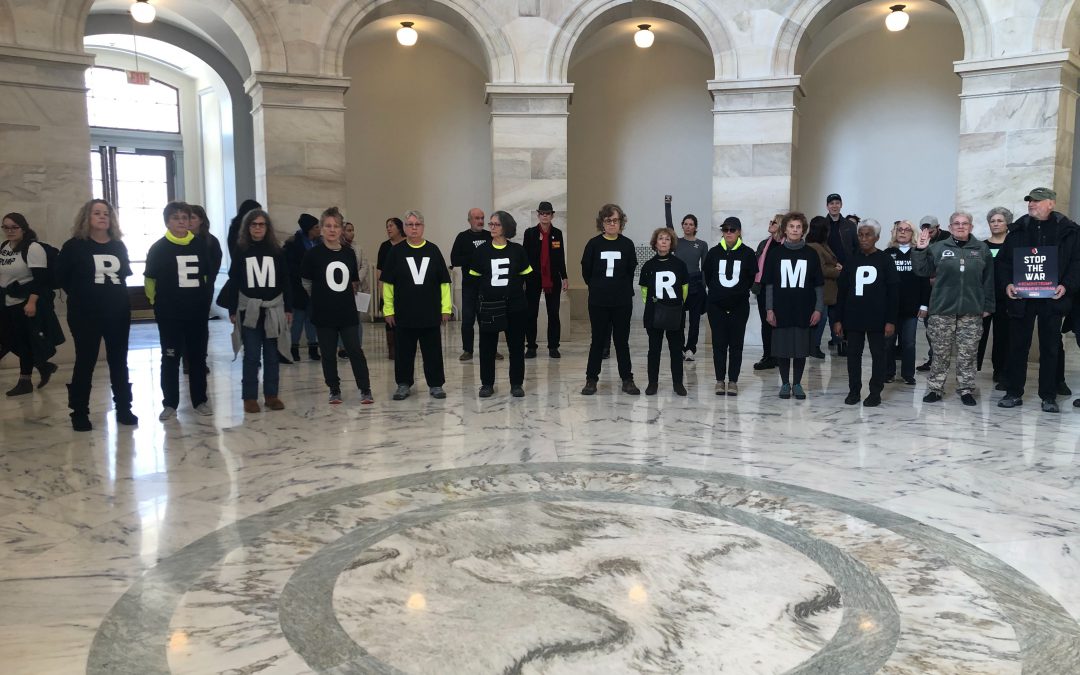 WASHINGTON – About 100 protesters swarmed Capitol Hill on Thursday to call for the removal of President Donald Trump and demand that Congress take action to stop war with Iran. A dozen were arrested.

The protest was organized by a diverse network of grassroots organizers including Women’s March, By The People and Remove Trump. Using the the hashtag #SwarmTheSenate, the protesters exhorted their senators to convict Trump of the two impeachment charges and remove him as president.

At noon, the protesters from across the country met outside the Capitol before entering the Russell Senate Office Building. The directions were simple: assemble in the building’s rotunda, deploy a massive flag reading “Remove Trump” and chant that the Senate should take action. They were instructed beforehand to clear out of the rotunda after the third warning from Capitol police to avoid arrest, but to have a valid ID and $50 ready if they were willing to be arrested. Twelve were arrested after refusing to leave.

A day earlier, House Speaker Nancy Pelosi signed the articles of impeachment, officially paving the way for a trial in the Senate. Alexandra Flores-Quilty, the executive director of By The People, said the purpose of the protest was to demand senators to uphold their oath to the constitution.

“He is a danger to our democracy and the people of this country,” Flores-Quilty said. “Every single day he is in office he continues to pose a danger to the American people. Just right now we have the immediate threat that has been illuminated in the past couple weeks as he recklessly threatens war with Iran.”

Twenty-year Army and Air Force veteran Colleen Boland was among those detained by Capitol police. Boland spoke out against the potential war with Iran, claiming that Trump’s policies are a “danger to national and global security.”

Boland said when she joined the military she took an oath to defend against all enemies, foreign and domestic.

“I never imagined I would have to come home and do it here,” Boland said.

Once in the Russell rotunda, the protesters began chanting, “Trump is a danger to our country, to our democracy, impeach him, remove him from power.” Demonstrators wore black t-shirts with the words, “Remove Trump,” and laid out a black flag showing the same phrase. Capitol police immediately warned demonstrators to clear out or face arrest. However, some persisted and began to chant messages aimed at senators: “Do your job” and “Trump is guilty.”

After three warnings, Capitol police began to arrest the protesters. As the 12 remaining protesters were detained, they sang “I Shall Not Be Moved,” a common protest song popularized during the Civil Rights Movement.

Women’s March Chief Strategy Officer Caitlin Breedlove said if people don’t want to go to war with Iran and they want Trump to be removed, they need to get involved.

“I’m here because I have a two-year-old son, and I don’t want him being in a world where someone like Trump is president,” Breedlove said. “As a queer person, as someone with a mixed race family, as someone who lives in Arizona, in a border state, it’s not acceptable. It’s not always easy, but it’s critical.”

The protest is one of multiple events in which Women’s March is participating leading up to its nationwide march on Jan. 18. The Women’s March formed in response to Trump’s inauguration in 2017, and the organization immediately advocated for his impeachment. Rachel O’Leary Carmona, chief operating officer at Women’s March, said the removal of Trump and the war with Iran are issues that affect women everywhere.

“Women are disproportionately affected by war,” O’Leary said. “[War] displaces women, it puts women at a greater risk of sexual assault and rape, it causes disruption in families and it makes women less safe. This is absolutely a women’s issue.”