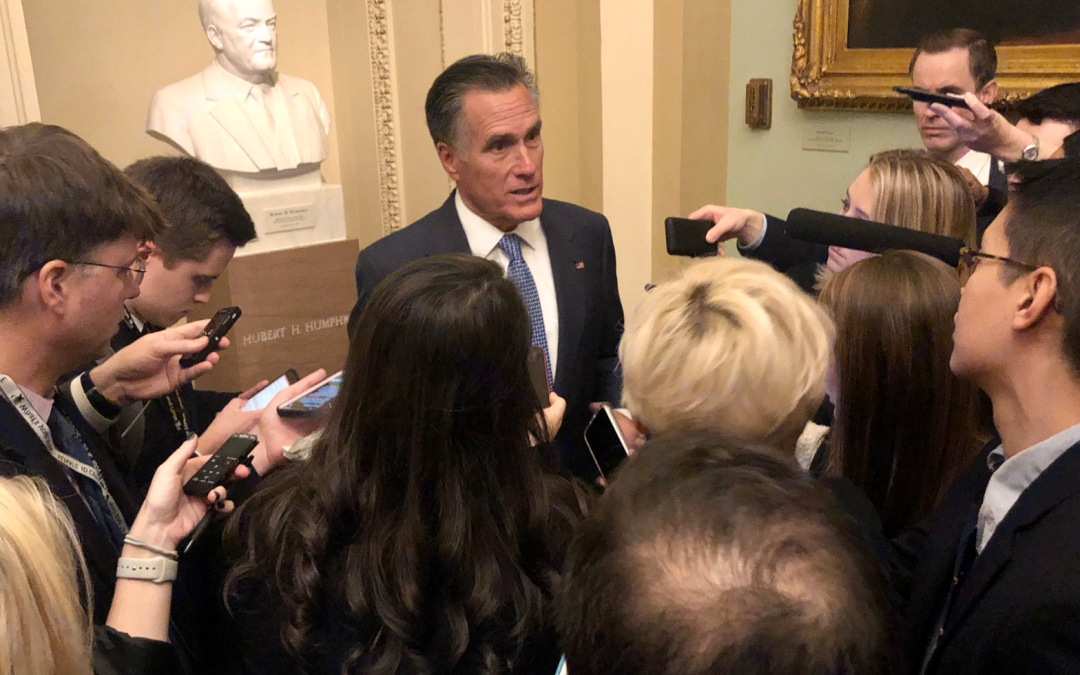 Sen. Mitt Romney, R-Utah, speaks to reporters on Capitol Hill. Romney is one of the Republican senators whom Democrats hope might break with his party. (Angelina Campanile / MNS)

WASHINGTON – Eleven times Senate Minority Leader Chuck Schumer rose before Chief Justice John Roberts on Tuesday and Wednesday morning to introduce amendments to allow more evidence in the Senate impeachment trial of President Donald Trump. Each time, those amendments failed. But acceding to some Republican rumblings, Senate Majority Leader Mitch McConnell agreed to extend the time both sides have to present their cases and to allow evidence from the House investigations into evidence without a vote.

In a marathon session that started Tuesday at 1 p.m. and didn’t end until about 2 a.m. Wednesday, Senate Republicans voted down amendments that would have allowed Democrats to subpoena documents and call witnesses and regulate submitting new evidence in the trial of the president, who is accused of obstruction of Congress and abuse of power. The charges stem from a telephone conversation in which Trump asks the president of Ukraine to do him a favor by investigating Democratic presidential candidate Joe Biden’s son; at the same time, military aid for Ukraine ordered by Congress was put on hold by the White House.

Schumer repeatedly introduced amendments to McConnell’s rules resolution that sets the procedural structure of the trial. The amendments called on the Senate to issue subpoenas to numerous departments and key figures at the center of the impeachment inquiry.

The Republican-supported resolution does not permit evidence other than that already obtained by the House to be entered into the Senate record. McConnell originally wanted the Senate to have to vote to allow the House evidence, but removed that language after some swing Republican senators voiced concerns. But the rules do state the Senate will wait until later in the trial to decide if it will collect more evidence. The resolution allows time to consider issuing subpoenas after both the House-appointed managers and the president’s defense team argue their cases and the 16-hour question-and-answer period has concluded.

Democrats have criticized the rules package, saying it would prevent important evidence from being included in the trial.

“No Republicans explained why less evidence is better than more evidence,” Schumer said from the Senate floor.

Impeachment managers and members of Trump’s legal team alternated making arguments during two-hour blocks to debate each amendment. As the day progressed, each side emphasized the same key points on the different amendments.

The Democratic impeachment managers said all previous Senate impeachment trials included witness testimony and that the House was blocked by the President from obtaining important evidence.

The President’s legal team contended that further subpoenas would likely violate the Trump’s rights to executive privilege and due process. The lawyers also said it was the House’s job to compile all the evidence before coming to the Senate with its case.

“They have no case,” White House Counsel Pat Cipollone said. “Frankly, they have no charge.”

Later amendments introduced by Schumer would regulate other matters of the trial.

Schiff said one amendment, the seventh one introduced during the session, was intended to prevent the president from “cherry-picking” and selectively introducing evidence into the record.

Around 1 a.m., Chief Justice John Roberts exerted his power for the first time and called on both sides to raise their level of civility.

His admonishment came after a lengthy speech on the floor from impeachment manager Rep. Jerry Nadler, D-N.Y., and harsh rebukes from Cipollone and Trump’s personal lawyer Jay Sekulow. Roberts told both sides to “remember that they are addressing the world’s greatest deliberative body.”

The Senate will reconvene at 1 p.m. Wednesday to continue the trial with presentations from the House managers.