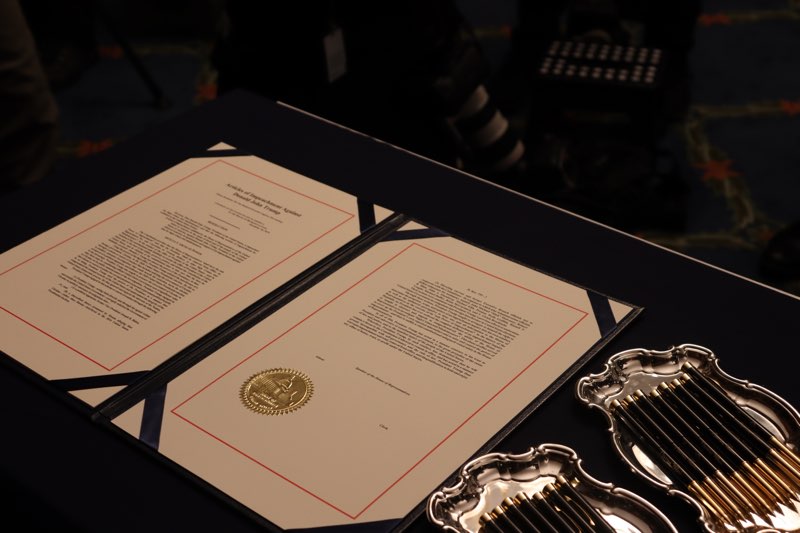 WASHINGTON — Shortly before the Senate formally accepted the articles of impeachment against President Donald Trump from the House, senators delivered the president a major legislative victory Thursday, passing the U.S.-Mexico-Canada trade agreement in an overwhelmingly bipartisan vote.

The U.S.-Mexico-Canada Agreement, an updated version of the North American Free Trade Agreement, is “a very big bipartisan win for the American people,” Sen. Charles Grassley, R-Iowa, said. It was approved 89-10; the House passed the billed earlier. It now goes to Trump for his signature.

But the bipartisanship ended within hours.

“In just a few hours this chamber will be transformed,” Senate Minority Whip. Dick Durbin, D-Ill., said during the floor debate of USMCA.

In the early afternoon, Sens. Roy Blunt, R-Mo., Patrick Leahy, D-Vt., Lindsey Graham, R-S.C., and Dianne Feinstein, D-Calif., escorted Supreme Court Chief Justice John Roberts into the Senate chamber on Thursday afternoon. Roberts swore in the senators as jurors in the impeachment trial set to begin Tuesday.Democrats have demanded that Senate Majority Leader Mitch McConnell call witnesses to delved into the charges, but McConnell has resisted, saying he is coordinating with the White House on how to run the trial.

But as Senators waited to vote on the USMCA, they appeared insulated from the partisanship of recent weeks, talking and laughing with their colleagues from across the aisle.

Grassley, who — as the president pro tempore of the Senate —later swore in Roberts to begin the trial, smiled as he spoke with Sen. Ron Wyden, D-Ore.,in the Senate Well. McConnell, who has for weeks lobbed partisan attacks at House Democrats for what he called an unfair impeachment process, spoke with Wyden at length.

Wyden praised the USMCA for its protection of digital property, a section he said received widespread bipartisan support.

Still, the floor speeches weren’t all pleasantries. Wyden called the Trump administration’s initial proposal “stunning” in its weak enforcement of proper working conditions. The bill passed by the House and Senate has added protections for Mexican workers as well as tougher environmental protections.

As the noon hour approached, the Senators increasingly organized themselves by party.Sen. Tim Kaine, D-Va, previously seated on the Republican side of the chamber talking to Sen. Marco Rubio, R-Fla., returned to the opposite side to sit among the Democrats.

House Intelligence Committee Chairman Adam Schiff, D-Calif., and House Judiciary Committee Chairman Jerry Nadler, D-N.Y., followed the sergeant at arms into the Senate, followed by the five other House-appointed impeachment managers. The laughter and levity of the morning gave way to silence.

Schiff read aloud the two articles of impeachment. The first article, abuse of power, accuses the president of withholding congressionally appropriated security aid to the Ukraine after soliciting the nation’s help in investigating Hunter Biden, the son of former Vice President Joe Biden, a leading candidate for Democratic presidential nomination. The Government Accountability Office, a nonpartisan investigation agency of Congress, said in a report released Thursday that the White House hold on the Ukraine aid violated federal law.

The second article, obstruction of Congress, outlines the president’s defiance of House subpoenas to keep executive office officials from appearing as witnesses before the House.