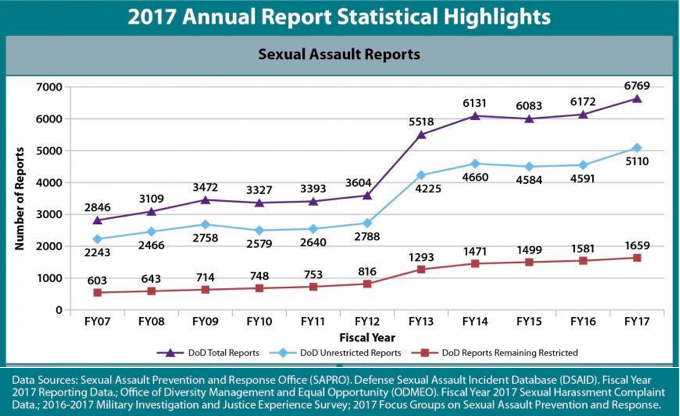 WASHINGTON — Sexual assaults of members of the military have risen in recent years, and some female veterans say they need better mental health services from the Department of Veterans Affairs, which already has implemented some new treatment plans for mental health issues that women face following sexual trauma.

In fiscal year 2017, 5,277 service members, mostly women, reported a sexual assault had occurred during their military service, according to a Defense Department report. That was an increase of 10 percent – 4,794 victims – from the previous year.

Last week, Sen. Martha McSally, R-Ariz., disclosed she had been raped by a superior officer during while serving in the Air Force. She is one of thousands.

The Veterans Health Administration screens everyone who goes to a VHA medical facility for mental health issues, including military sexual trauma. Commonly referred to as MST, military sexual trauma is a sexual assault or repeated threatening sexual harassment of a service member while he or she was in the military.

McCutcheon said 29 percent of the women treated at VHA facilities said they have been sexually assaulted or harassed while serving in the military, and nearly 81 percent of those who screened positive for MST agree to mental health treatment.

“We find that many of our women who do experience MST have other medical and mental health issues,” such as posttraumatic stress disorder, depression and substance abuse linked to their MST, she said.

In addition to screening all patients for mental health problems, every VA health care facility has a MST coordinator and over 107 VA facilities have trained providers in Skills Training Affective Interpersonal Regulation, an initiative that provides counseling for emotional dysregulation, a commons symptom for women with MST.

Some women with MST prefer gender-exclusive treatment programs. The VA does not offer these at all VA facilities and McCutcheon said the VA does not promote one model over another when it comes to exclusive and mixed gender programs.

The Pink Berets, a nonprofit created in 2017 to provide mental health counseling to women veterans in Texas, said a majority of their applicants report having been sexually assaulted while in the military.

“The VA is doing everything they can to address this situation, but I don’t think that they’re equipped to handle the amount of women that are needing help,” Pink Berets founder and CEO Stephanie Grattas. She said some of the women her organization has helped say the VA’s waitlist is too long or that traditional methods to treat PTSD aren’t working.

In its two years of existence, the Pink Berets has provided counseling to over 300 female veterans, Grattas said. The “experiential and holistic” counseling programs include culinary art therapy, kayaking retreats and equine therapy.

“We’re branching out in a number of different ways to find out what helps,” said Grattas.

“These are certainly services that can complement what is going on within the VA,” she said. “Every VA should be connecting with these type of community resources because we can’t do it all by ourselves.”

In Washington, Rep. Chellie Pingree, D-Minn., is trying to expand the spectrum of mental health issues resulting from military sexual assault that are recognized by the Veterans Benefits Administration.

In 2002, the VA relaxed its evidentiary standards for benefit claims resulting from MST to include letters from family, doctor recommendations, or noted changes in behavior following the alleged assault. Previously, it had required claimant to prove sexual assault had occurred with police reports, medical records, or other official evidence.

At the same hearing, Dr. Patricia Hayes, chief consultant for VA Women’s Health Services, said that over 40 percent of women veterans who use VA services have been diagnosed with at least one mental health issue such as depression, anxiety or eating disorders.

Col Christensen, a former Air Force chief prosecutor and current president of Protect Our Defenders, a national organization dedicated to ending sexual assault of the military, said his goal is to remove roadblocks in the military that make victims fearful of seeking treatment.

Protect Our Defenders helped change military law in 2015 to prohibit the mental health records of MST survivors from being turned over to the defense in a court martial of a service member accused of committing sexual assault.

“This was obviously traumatizing for survivors to have their mental health records turned over to their rapist,” said Christenson. “Now, that door is not completely shut, but it is much less likely that the offender will get access.”

According to Christenson, the old law could have been the reason some victims of MST did not seek treatment. But some still don’t seek treatment because they fear retaliation.

“Every year around 60 percent of men and women who report sexual assault in the military say they were retaliated against after reporting,” he said.

In terms of mental health treatment, Christenson believes the VA has come a long way.

Grattas said women treated by The Pink Berets entered the program because they felt they wouldn’t be judged or experience repercussions due to speaking out about their military sexual assault.