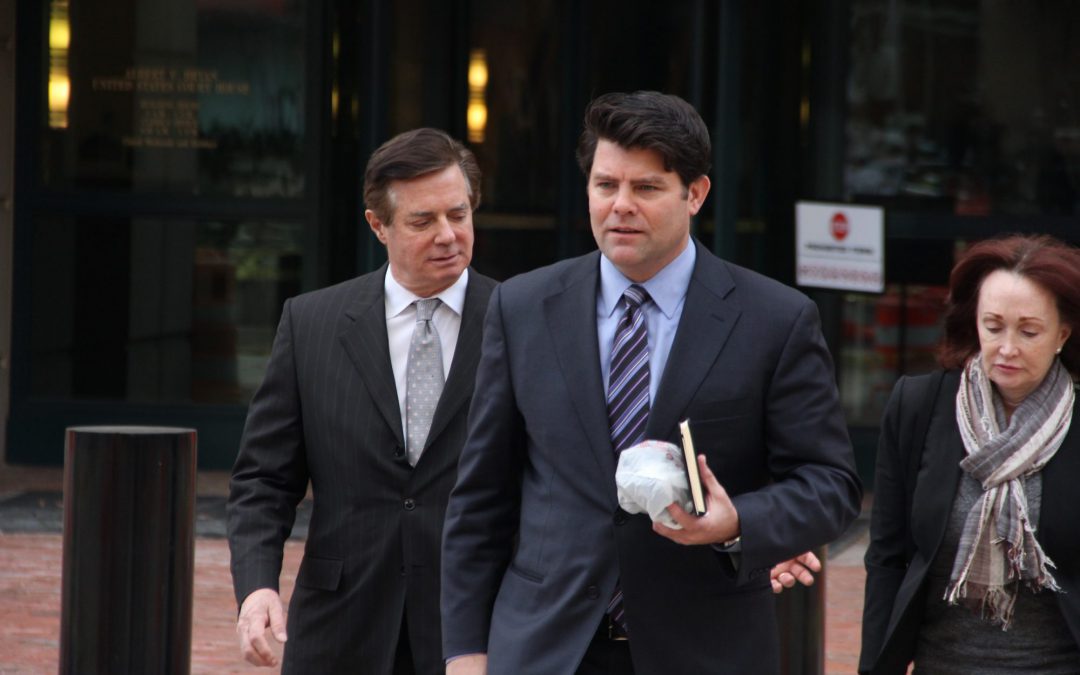 Paul Manafort (left) leaves the US District Court on March 12 after his arraignment on charges related to the Russia Investigation. (Eric Miller/MNS)

Manafort is set to be sentenced on related conspiracy charges in federal court in Washington on Wednesday. District Judge Amy Berman Jackson could add up to 10 years in prison, and will decide if these sentences will be consecutive or concurrent.

Ellis did not follow sentencing guidelines, which suggested 19 to 24 years in prison — numbers he called “excessive.” Ellis said he followed low sentences given in previous tax crime cases, and cited Manafort’s lack of prior criminal record.

“I don’t expect the sentence I’m about to announce to meet everyone’s approval,” Ellis said in court. “…It’s a just sentence.”

Mueller’s team pushed for more time, trying to distinguish the case from other white-collar crimes. Prosecutors painted Manafort as a remorseless man who has refused to accept responsibility for his crimes.

“The defendant blames everyone from the special counsel’s office to his Ukrainian clients for his own criminal choices,” prosecutors said in a recent sentencing memo.

Manafort’s lawyers, citing health problems, sought a more lenient sentence, saying Manafort learned a “harsh lesson.” In court, Manafort was in a wheelchair, and was not required to stand by Ellis.

In his allocution, Manafort was quiet and subdued. In solitary confinement for over 9 months, Manafort said the imprisonment has given him “time to reflect.”

“I will never put myself in questionable circumstances in the future,” he said.

Manafort did not express remorse for breaking the law, only for causing pain to his family. Ellis expressed surprise at this, and told Manafort he should have accepted responsibility.

As a part of a possible plea, Manafort was previously questioned by Mueller’s team for around 50 hours. Prosecutors abandoned this plea deal in November when they said it became clear Manafort lied “about a variety of subject matters,” including about ties to a Russian intelligence associate.

On Thursday, Manafort’s lawyers said he cooperated with the special counsel by sitting with the team for that length of time. Prosecutors countered this, saying Manafort provided the team with information “we already knew.”

“It certainly wasn’t 50 hours of information that was useful,” Greg Andres, the lead prosecutor in the case, said in court.