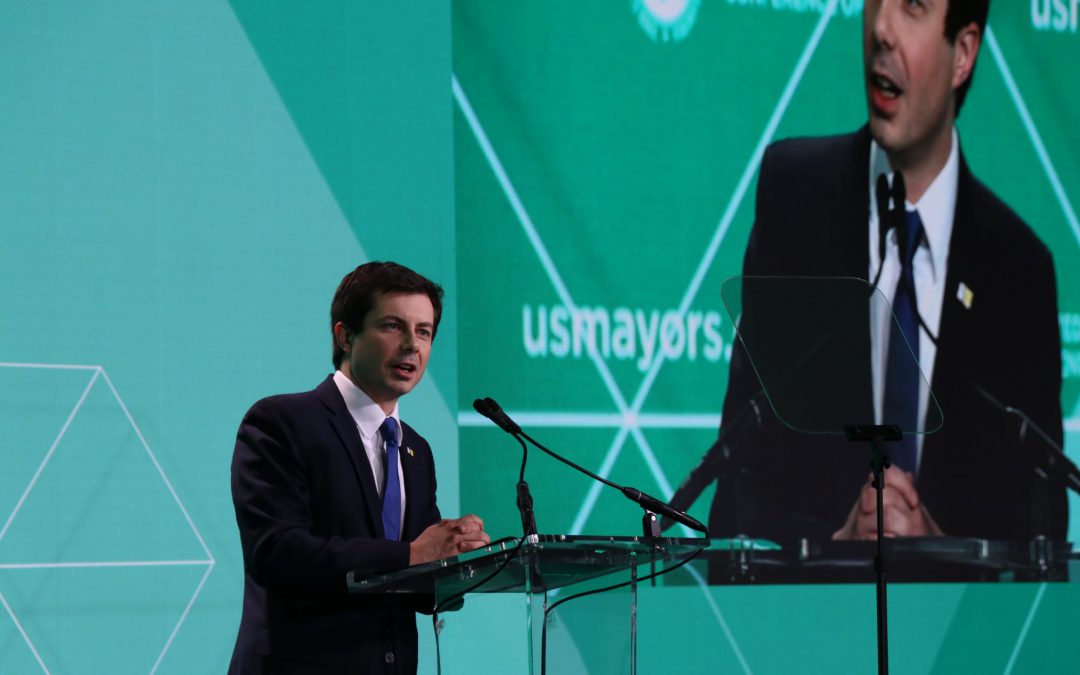 Pete Buttigieg, openly gay mayor of South Bend, Indiana, spoke at the U.S. Conference of Mayors in late January about his pitch for the Democratic ticket in 2020. He would be the first openly gay nominee for president. (Daniel Grimes/MNS)

Lavelle was elected mayor of Carrboro in 2013. She said because of the ban on passing local protections for LGBTQ people, her role as a local official involves advocating for LGBTQ citizens at the state and federal level.

Lavelle is one of 42 openly LGBTQ mayors in the United States according to The Victory Institute, which conducts research on LGBTQ issues in politics as well as recruits and trains LGBTQ people to run for office.

In the past decade, Americans have become more socially accepting of LGBTQ people. In 2016, a Pew Research Center survey found that 63 percent of Americans said “homosexuality should be accepted by society” compared with 51 percent 10 years earlier. A landmark Supreme Court decision granted marriage rights to same-sex couples in 2015.

But LGBTQ people are still vulnerable to housing, employment and public accommodations discrimination, according to Nicolas Jon, a local government expert at the R Street Institute, a free-market think tank. He said a federal framework prohibiting such discrimination would solve the problem.

Meanwhile, local officials such as mayors, city council members and state legislators have “wide latitude” to fill the policy void, according to Jon.

Lavelle said part of her role as mayor is to secure legal protections for her LGBTQ constituents.

“That’s what mayors do. You stand up for your community,” she said. “I could see a lot of national areas where it doesn’t make sense for a mayor to chime in on, right? But, this affects people who live, work and play in our community every day.”

“But it’s been terribly frustrating because our toolbox is so limited,” Lavelle said.

Mayor Ron Strouse of Doylestown, Pennsylvania prefers to say he is a “mayor who happens to be gay” rather than a “gay mayor.” Pennsylvania has six openly LGBTQ mayors, the most of any state in the country.

But, like North Carolina, and 26 other states, Pennsylvania has no statewide legislation explicitly prohibiting discrimination against LGBTQ people in housing, employment and public accommodations, according to the Movement Advancement Project, which advocates for these protections around the country for LGBTQ people.

However, more than 40 local governments in Pennsylvania have passed ordinances that protect LGBTQ people from discrimination in housing and employment, among other areas, according to the ACLU.

Strouse said that “much of the blame” for the lack of statewide protections rests with one member of the state legislature, Republican Rep. Daryl Metcalfe. Throughout his term as chairman of Pennsylvania House State Government Committee, Metcalfe blocked what Strouse called any “meaningful” Democratic legislation, including a 2013 measure that would have banned discrimination against LGBTQ people in employment and accommodations in Pennsylvania.

Strouse said that legislators such as Metcalfe underscore the need for a federal bill.

“States will act in the void of congressional action,” he said. “But it doesn’t provide anywhere near the same protection.”

Jon said the lack of federal law affects how openly LGBTQ mayors have to “fill the void” in advocating for the LGBTQ community, using different strategies based on state and local legal protections.

Christopher Cabaldon, mayor of West Sacramento, California since 1998, has advocated for LGBTQ issues to the wider community of U.S. mayors.

Cabaldon said he said there had no such role models when he was growing up: “Back then, the only time you heard ‘gay’ and ‘mayor’ in the same sentence,” he said was followed by “I’m resigning, effective tomorrow.”

Now, he hopes to show parents of LGBTQ kids that “it’s not the end of the line, because the top official of our community is also gay.”

At the national level, he and then-mayors David Cicilline of Providence, Rhode Island and Sam Adams of Portland, Oregon — who are also gay — introduced a sweeping proposal to support marriage equality, condemn hate crimes and urge the repeal of the military’s “Don’t Ask, Don’t Tell” policy at the June 2009 meeting of the U.S. Conference of Mayors.

“It was the entire gay agenda in one resolution,” he laughed.

Three years prior, a proposal to condemn the Defense of Marriage Act — which defined federal marriage as between one man and one woman and allowed states to refuse marriage licenses to same-sex couples — failed to pass, but the three mayors’ proposal was adopted. Cabaldon attributed the success to growing numbers of LGBTQ mayors at the conference.

“It was an enormous sea change,” he said. “It showed how important it was for folks to speak for themselves in a way we now could.”