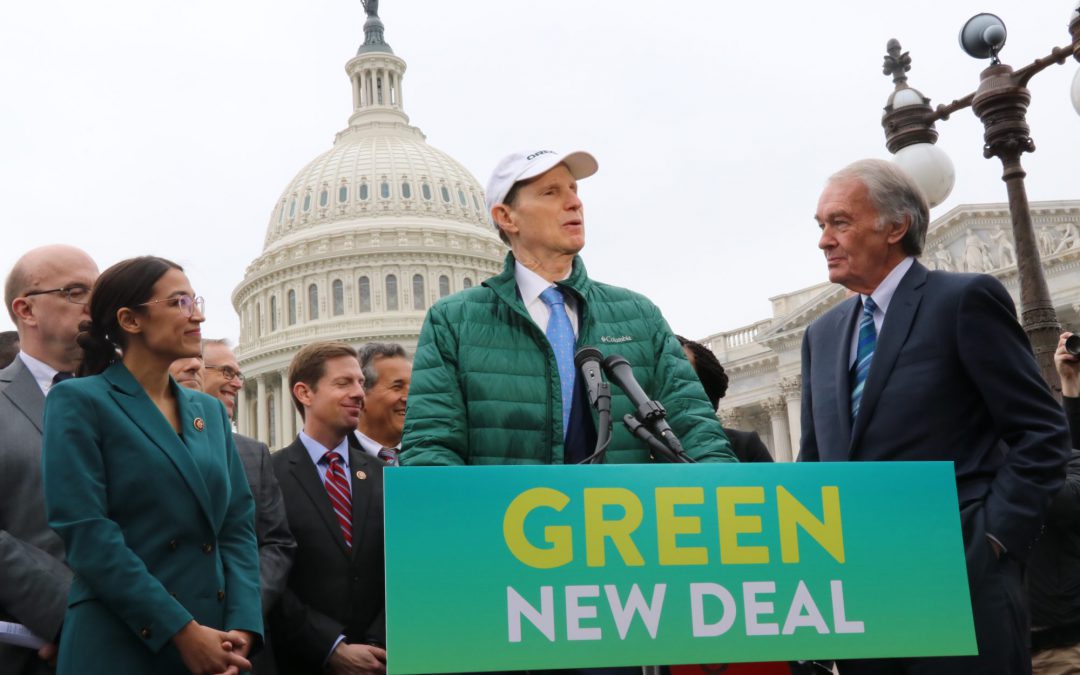 Sen. Ron Wyden, D-Ore., who is one of nine senators to cosponsor the Green New Deal, was one of two other senators to speak at the press conference on Thursday. The other was his fellow Oregonian Democrat Sen. Jeff Merkley. (Dan Rosenzweig-Ziff/MNS)

WASHINGTON — Americans are increasingly concerned that climate change is both real and manmade, and major fossil fuel industries are heeding the change in public sentiment by investing in green energy.

In 2019 alone, BP and Glencore agreed to investor demands to set business policy to limit greenhouse gas emissions in accordance with the 2016 Paris Accords and disclose the results to their stakeholders.

According to Yale’s Climate Change Communication December survey, 73 percent of Americans think global warming is happening, while 62 percent think it is caused by humans. This concern stems from an increase in intensity and frequency of natural disasters as well as increased discussion among politicians, especially President Donald Trump, according to Yale research affiliate John Kotcher.

Trump pulled out of the Paris Climate Accord and eliminated many Obama-era environmental policies and regulations even as his administration released the 2018 National Climate Assessment, a 13-agency report calling for swift action on human-induced climate change. He plans to appoint a new climate change commission headed by William Happer, a climate change denier who argues that more carbon dioxide emissions are positive for the Earth.

Meanwhile, progressive Democrats decided it was time to harness the public concern and proposed the Green New Deal, a sweeping resolution to reduce carbon emissions by 2030.

And some of the leading companies in the energy industry, except for coal, also heeded the public concern by changing their practices.

Following the 2015 Paris agreement, oil, natural gas and coal industry investors urged companies to reform their practices. In late 2017, industry investors created the Climate Action 100+ as an initiative to ensure the largest greenhouse gas emitters act on climate change, according to its website.

With over 300 investors totaling $33 trillion in assets, the group has persuaded over 100 companies to set policies that comply with the Paris agreement.

In February, British Petroleum announced that it would heed its investors’ calls for wider reporting on its climate change initiatives and join the initiative. “BP is committed to helping solve the dual challenge of providing more energy with fewer emissions,” said BP Chairman Helge Lund in a statement.

About 20 years ago, BP invested nearly $10 billion in clean energy sources, though it faced criticism at the time that it was a public relations stunt. Just 10 years later, the 2010 Gulf of Mexico oil spill cost the company any credibility of environmental stewardship it had gained . The latest move to join this organization is in part driven by competition from the industry’s major players, according to Axios.

But BP’s commitment to the initiative goes beyond lip service. To join Climate Action 100+, energy companies must commit to help limit the increase of global temperatures to well below 2 degrees Celsius, while also disclosing corporate information on what they are doing to achieve that goal.

“Going forward, investors will expect full and transparent disclosure, and will hold the board and company executives accountable for BP’s progress against this critical commitment,” said Mindy Lubber, Climate Action 100+ global steering committee vice chair, and Ceres CEO and president.

Glencore joined signed on to the initiative in late February and committed to its investors to limit emissions and increase disclosures. In addition to helping limit global temperatures from increasing above 2 degrees Celsius, Glencore is also examining its relationship with trade associations that could undermine its goals, including those that lobby for deregulation, according to a Glencore statement.

Shell has also led the industry’s gradual shift toward clean energy, albeit with its bottom line in mind, a practice common in the industry. CEO Ben van Beurden predicts that U.S. policy in line with Paris will be enacted, and that it “has to be delivered through business,” he said. “And I intend to fully benefit from that.”

The energy giant has already moved much of its business into natural gas, the cleanest fossil fuel, and plans to make coal and oil a smaller part of its budget, according to an investor earnings call at the end of January.

Van Beurden also said Shell has set short-term targets to help the company fulfill its long-term goals of limiting the increase of global temperatures and aims to invest $1 billion to $2 billion in clean energy this year.

There are still many in the energy industry opposing the realities of climate change.

The American Coal Council does not support any regulation to force companies to reduce carbon emissions nor is it interested in joining in voluntary efforts like those of BP and Shell.

“We want to utilize the rich energy reserves that we have in coal,” ACC Chief Executive Officer Betsy Monseu said. “We think that there is a better path to doing that through the use of advanced coal technology rather than not using coal or using less of it.”

In a section of the ACC website that characterizes the reporting of climate change as part of “the era of misinformation,” the company touts the increase of carbon dioxide as a positive because plants need it to survive.

Although some notable Republicans have acknowledged that climate change is happening, especially after the Trump administration released the National Climate Assessment, many argue that the market should solve the issue.

For Anne Simpson, chair of the Climate Action 100+ steering committee, there is no time to wait for government action.

“Keeping global warming to well below two degrees demands bold and urgent action from the world’s largest greenhouse gas emitters,” she said. “Our collaborative engagements with the largest emitters will spur actions across all sectors as companies work to avoid being vulnerable to climate risk and left behind.”