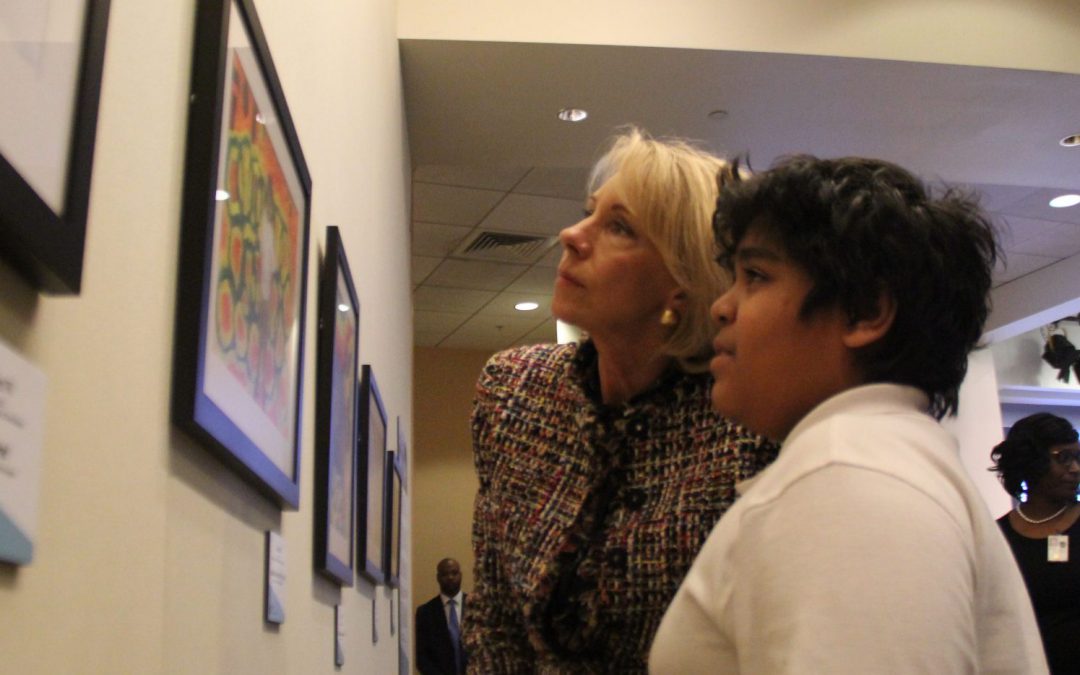 WASHINGTON –Education Secretary Betsy DeVos said Thursday that arts education is important for childhood development and deserves greater attention while praising students with disabilities who were selected to have their art on display at The Kennedy Center.

The 17 children from the U.S. and other countries including Pakistan, South Korea, Singapore, and Saudi Arabia had submitted their work for the exhibit “Yo Soy…Je Suis…I am…Motivated to Create”, sponsored by the Department of Education’s Student Art Exhibit Program in partnership with The Kennedy Center’s VSA International Art Program for Children with Disabilities.

“Arts education is essential to every student because it builds critical thinking, helps them connect ideas, problem solve, express themselves and really ties their learning together across subjects,” said Mario Rossero, senior vice president of education at The Kennedy Center. “It really is a critical part of everyday learning for their own growth and development.”

Dominic Borrayo, a student at School Without Walls at Francis-Stevens in Washington who was awarded the 2019 Yo Soy Artist award, said art is crucial for kids like him to express themselves and connect with peers about activities they share in common.

“I think art is important to me because it shows how you feel about one thing and you want to show it to others,” said Borrayo.

Along with the exhibit, students performed stand-up poetry, rapped songs and discussed how art was important to their lives.

Malik Claiborne, a local student who rapped at the exhibit as a featured performance, said that he uses music to keep the love for art alive in his family.

“I like music. I grew up around music,” said Claiborne. “I can keep the generation going. People can say your ‘grandmother was a great singer’, and she was a singer. It connects me to her and my family.”

Children like Malik have benefited from the support for arts education across the country that is featured in DeVos’ agenda both as a leader of the Department of Education and private citizen. 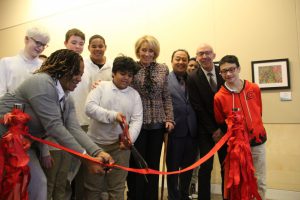 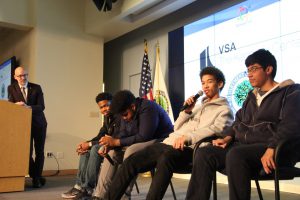 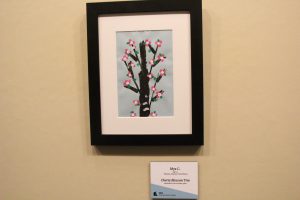 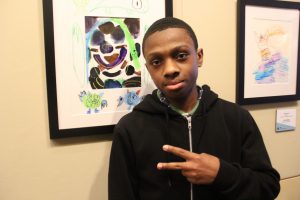 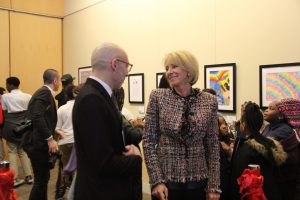 DeVos and her husband Dick privately donated $22.5 million to The Kennedy Center to create a management training program for arts leaders in 2010.

In February 2018, DeVos and the Department of Education awarded an $8 million grant to The Kennedy Center to support national arts education projects and services for children, with special emphasis on serving students from low-income families and students with disabilities.

The previous Art in Education grant, which was also awarded to The Kennedy Center in 2015 during the Obama administration, totaled $6.5 million.

“Children deserve the opportunity to express themselves. Art functions as a creative outlet for kids across the country and supports their personal development,” said Rossero.