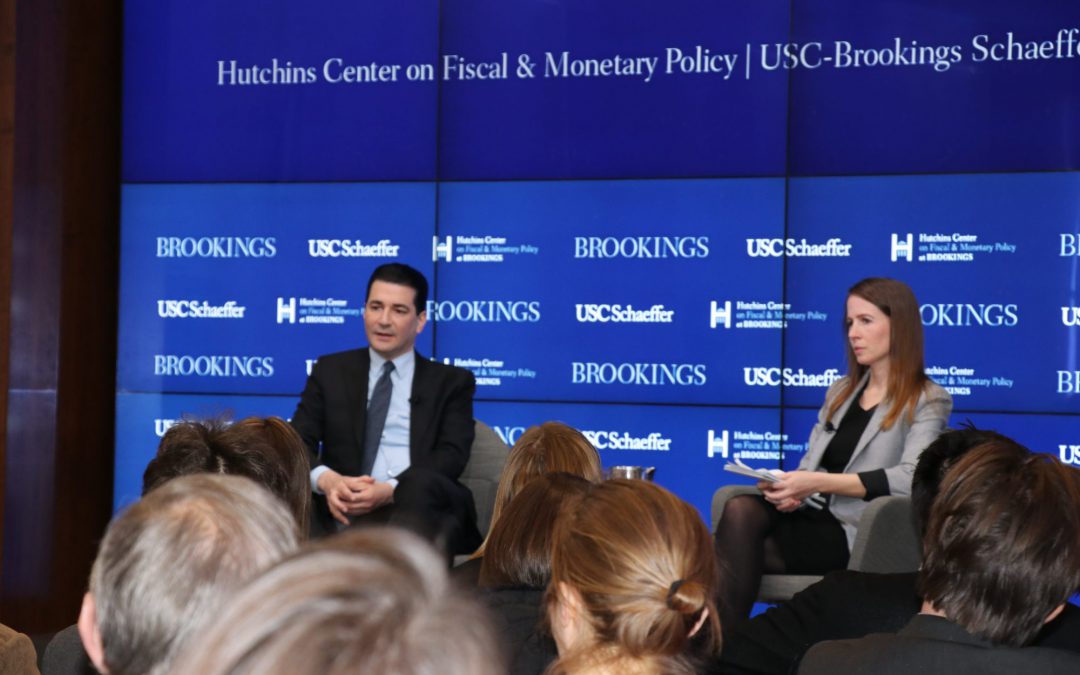 FDA Commissioner Scott Gottlieb talks about the effects of the shutdown on the agency, possible regulation of e-cigarettes with Bloomberg reporter Anna Edney at a Tuesday Brookings Institute event. (Samantha Handler/MNS)

WASHINGTON — Departing Food and Drug Administration Commissioner Scott Gottlieb said the agency should remain committed to his fight against vaping at a Brookings Institution event on Tuesday, saying its benefits in helping adults quit smoking should not come “at the expense of youths.”

Gottlieb, the doctor and former venture capitalist who President Donald Trump appointed to the position in 2017, announced earlier this month that he is leaving the FDA on April 5 to spend more time with his family. One of his signature issues were fighting tobacco and teen vaping, including a proposal to limit the amount of nicotine in cigarettes and a crackdown on youth e-cigarette use.

Trump has named Dr. Ned Sharpless, the director of the National Cancer Institute, to acting head of the FDA.

Some tobacco and e-cigarette experts have said Gottlieb’s departure could mean cigarette and e-cigarette makers that may no longer have to worry about the tougher regulations he proposed.

In January, Gottlieb sent letters to Altria, the company that makes Marlboro cigarettes, and Juul, which controls 75 percent of the e-cigarette market, accusing them of backing off on promises they made to the agency to keep e-cigarettes away from minors. The agreement included a public pledge to remove nicotine flavor pods from store shelves.

The Centers for Disease Control said in February that the number of high school students using tobacco products increased from 2.1 million in 2017 to 3.6 million in 2018. CDC Director Robert Redfield said in statement the rise corresponds with a hike in Juul product sales and puts “a new generation at risk for nicotine addiction.”

Gottlieb said though the long-term goal of the agency is to remove flavors from cigarettes and cigars. He added that the FDA is in the process of developing a guidance for flavored pod-based e-cigarettes, such as the ones Juul manufactures, and that the future commissioner may have to “take action” against that category. Associations like the Campaign for Tobacco-Free Kids have praised Gottlieb for his proposals that aim to curb youth tobacco and e-cigarette use.

Juul’s pod-based products drive youth e-cigarette use and nicotine addiction, Gottlieb said, and next year he expects overall tobacco use among minors to rise.

“Even if these products offer some public health benefits in adult cessation, if that is outweighed by youth starting using nicotine, we have to consider banning these products,” Gottlieb said.

George Conley, the president of the nonprofit advocacy organization the American Vaping Association, said Gottlieb is overlooking the benefits of vape products.

“Vaping products, including pod systems like Juul, have helped several million American adults quit smoking and improve their health,” Conley said. “Gottlieb is threatening to remove these products off the market before even seeing if his proposed policy works.”

Gottlieb said his proposals concerning youth vaping have support from Congress and the White House, and he expects the agency will follow through on his plans.