A Tale of Two Underdogs: Sanders and Buttigieg race for New Hampshire 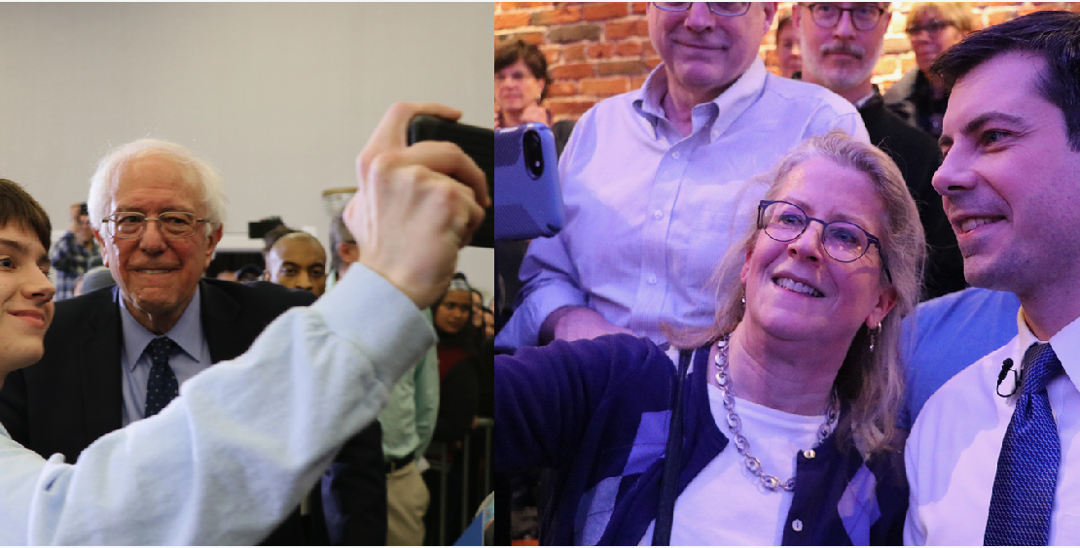 PORTSMOUTH, N.H. — In 2016, Sen. Bernie Sanders was the underdog against political powerhouse Hillary Clinton, but pulled off an upset win in New Hampshire, the nation’s first primary.

Now Sanders is running again —and is the state’s heavy favorite in 2020.However this time around, Sanders faces an underdog of his own — South Bend, Indiana mayor Pete Buttigieg.

A gay war veteran, Buttigieg is running on progressive ideas like environmental protection and income equality. With little name recognition and a far smaller donor base, Buttigieg is campaigning hard just to get on the debate stage, while Sanders is using the early time to mobilize activists.

The candidates’ different needs played out at their events last weekend in New Hampshire. Sanders held two consecutive rallies — one in Concord and one in Keene — where he called for national unity and laid out his plans for a Sanders presidency. At a more intimate event in Portsmouth, Buttigieg was out to convince voters that he can bring a different voice to the Democratic primary compared with the more established candidates in the race.

“Obviously I have a somewhat different message and I’m a very different messenger,” Buttigieg said in an interview, “but at the end of the day I think all of us in this process have more in common than not on values.”

At 37 years old, Buttigieg is tied for youngest candidate in the race with Rep. Tulsi Gabbard, D-Hawaii. Against Sanders, the oldest candidate in the race thus far, and others, Buttigieg is at an advantage, said University of New Hampshire political science professor Andy Smith. Buttigieg is a war veteran, a millennial, a Rhodes Scholar and a progressive mayor in a red state — allowing him to stand out in an already crowded field of Democratic contenders, Smith said. 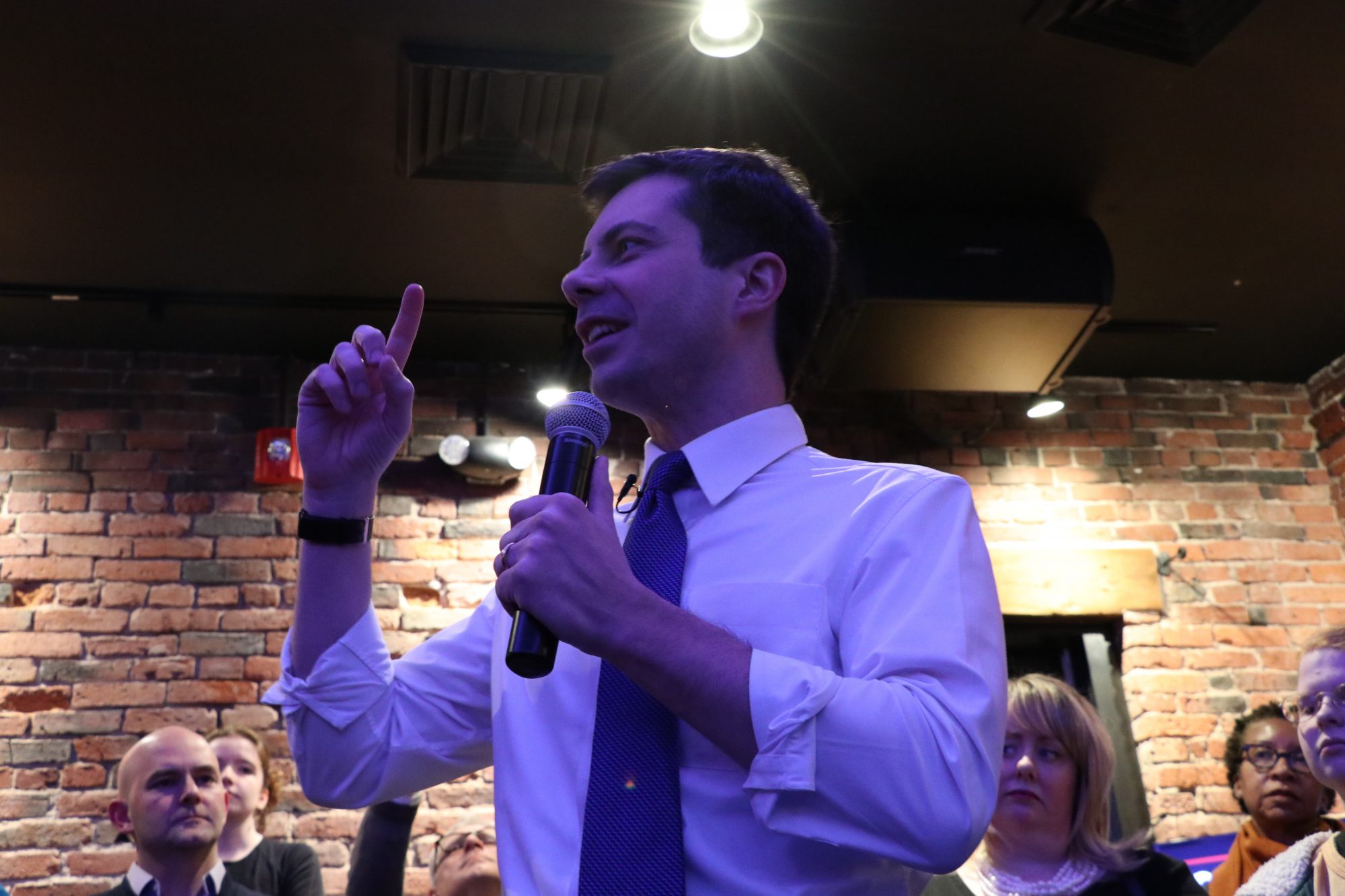 And although Buttigieg’s message is “eloquent,” Smith said he doesn’t have the visibility for donors to see him as a credible candidate. And the key to a successful campaign, Smith said, is money.

The Democratic National Committee announced in February it would limit its first presidential debates to 20 candidates and would require candidates to either poll at 1 percent in three separate polls or meet a fundraising threshold. To meet the fundraising requirement, candidates must receive donations from 65,000 people in 20 different states.

However he needs to mobilize supporters, which Buttigieg highlighted in a Portsmouth, New Hampshire meet and greet on Friday. After addressing over 400 guests with short remarks about his platform, Buttigieg asked them for donations, no matter how small, so he can show enough support to get in the candidates’ debate.

Two days later, Buttigieg raised his image – and raised $600,000 within 24 hours, according to his campaign –by appearing on a CNN town hall at the SXSW festival in Austin, Texas. He was praised for a strong connection with the audience and a focus on substantive issues.

But in Portsmouth, many stopped in just to learn about his campaign. Some even wanted to know how to pronounce his name.

“Listen carefully, I’ll explain how to pronounce my name,” the South Bend mayor joked in his opening remarks. “Pete.”

Some listeners were impressed with his ideas. Jacob Denninger, a 19-year-old Georgetown freshman back home on spring break, noted he did not learn about Buttigieg from national media but from online podcasts. Denninger said he likes Buttigieg’s broad message of progressive politics and the mayor’s detailed knowledge of policy.

“Quite frankly, he’s the only person who’s inspired me in the Democratic field so far,” Denninger said.

Janet Dubner, 72, from Chelmsford, Massachusetts, said she thought he was “impressive.” She said she was particularly drawn to his plans for climate change and improving the lives of future generations after hers is “long gone.”

“I’m more concerned about the old people running who are more my age,” Dubner said. “I don’t think (Joe) Biden or Bernie Sanders should run. I think they’re too old.”

For Sanders supporters, age is not an issue. In Concord on Sunday, at his first New Hampshire event of the 2020 election season, Sanders attracted a crowd of roughly 600, many of them sporting “Bernie merch” like hats, buttons and shirts emblazoned with the senator’s face. 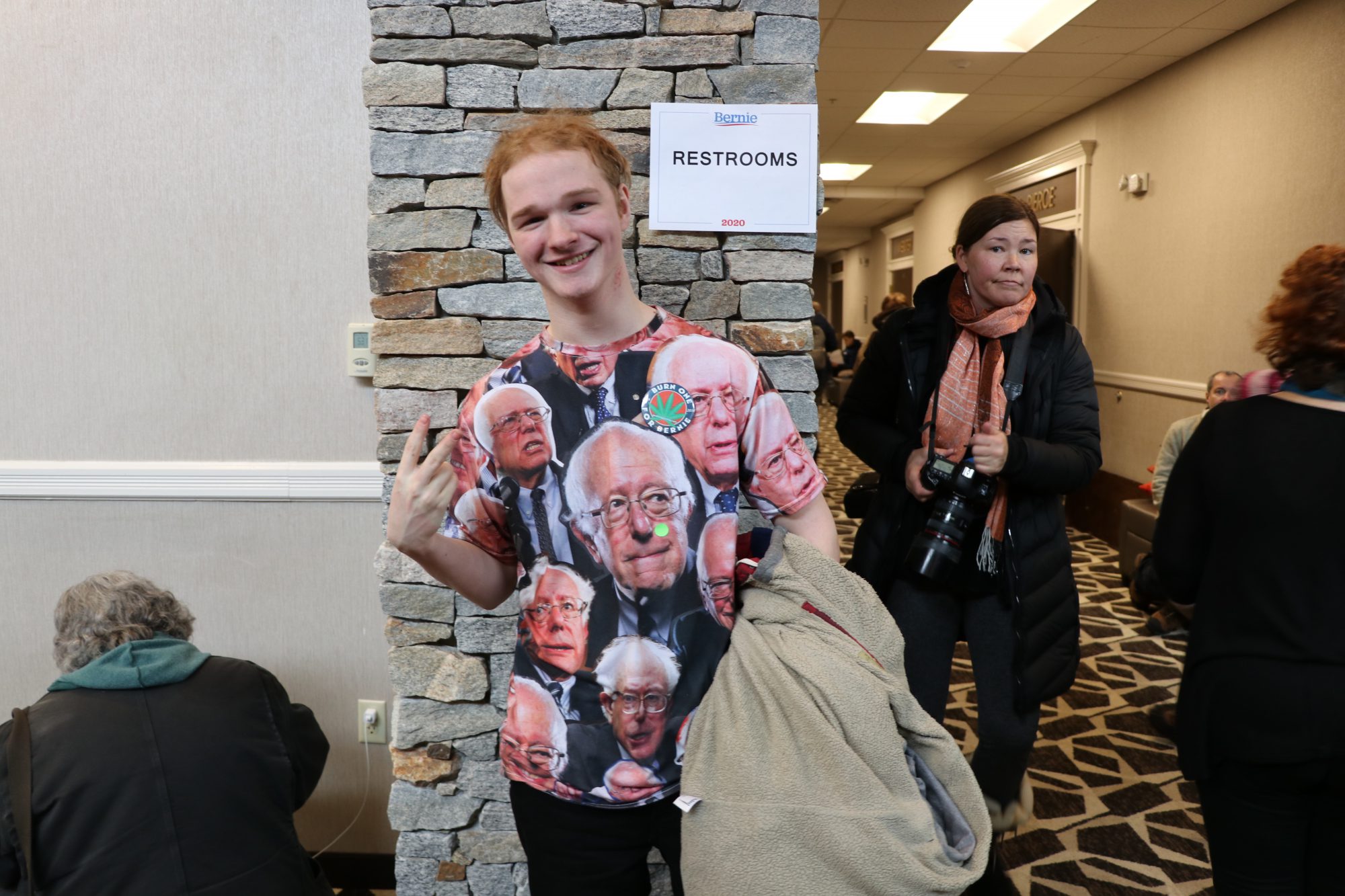 “Let me offer a special thanks to the people of New Hampshire,” the 77-year-old senator said. “In 2016, this is where the political revolution took off.”

Sanders said his ideas, previously deemed “too radical” by moderate Democrats, are now in the mainstream, such as “Medicare for All” and a $15 minimum wage.

“Today, virtually all of those ideas are supported by a majority of the American people,” he said, “and they are being supported by Democratic candidates from school board to president of the United States.” 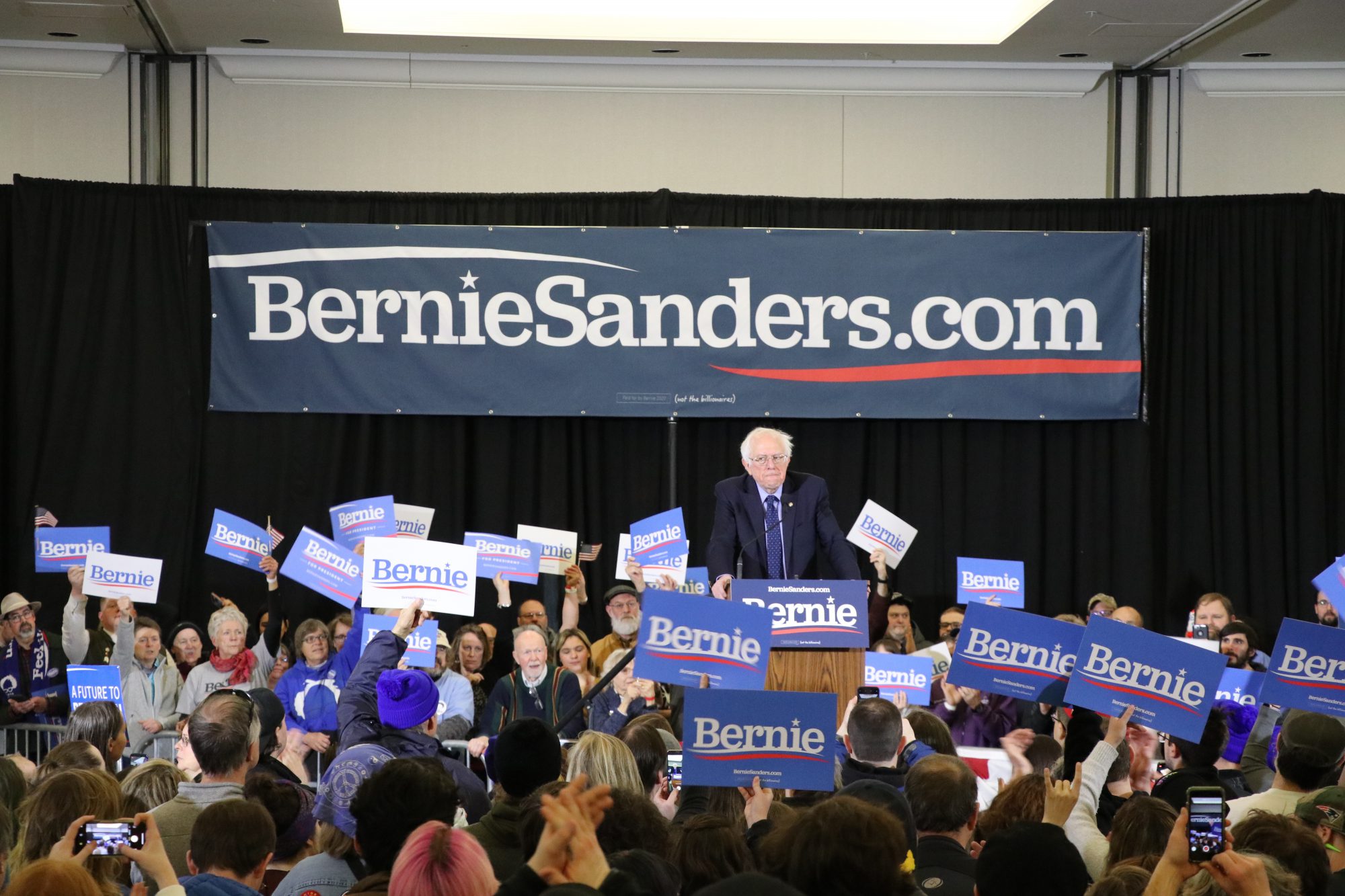 Sanders speaks at his Sunday rally in Concord. (Charlotte Walsh/MNS)

Sanders is running on nearly the same platform as he did in 2016. With more name recognition and a large reduction in the powers of DNC superdelegates, many of whom supported Clinton in 2016, fans hope the second time’s the charm.

Eric Zulaski, a 43-year-old solar panel installer from Manchester, said he supported Sanders in 2016 and will again in 2020. Zulaski said he admires the issues Sanders has championed — like universal health care, free college tuition and campaign finance reform — and believes he will be successful in 2020.

“Bernie showed that he has got a lot of energy,” Zulaski said. “So many of the other candidates are adopting the positions he has. He’s a bold leader.”

Zulaski and others are not worried about the senator’s age. Dana Theokas, a 31-year-old business analyst from Manchester, said voters should “look beyond those identities.”

“Bernie can touch a pulse and speak for all generations,” she said. 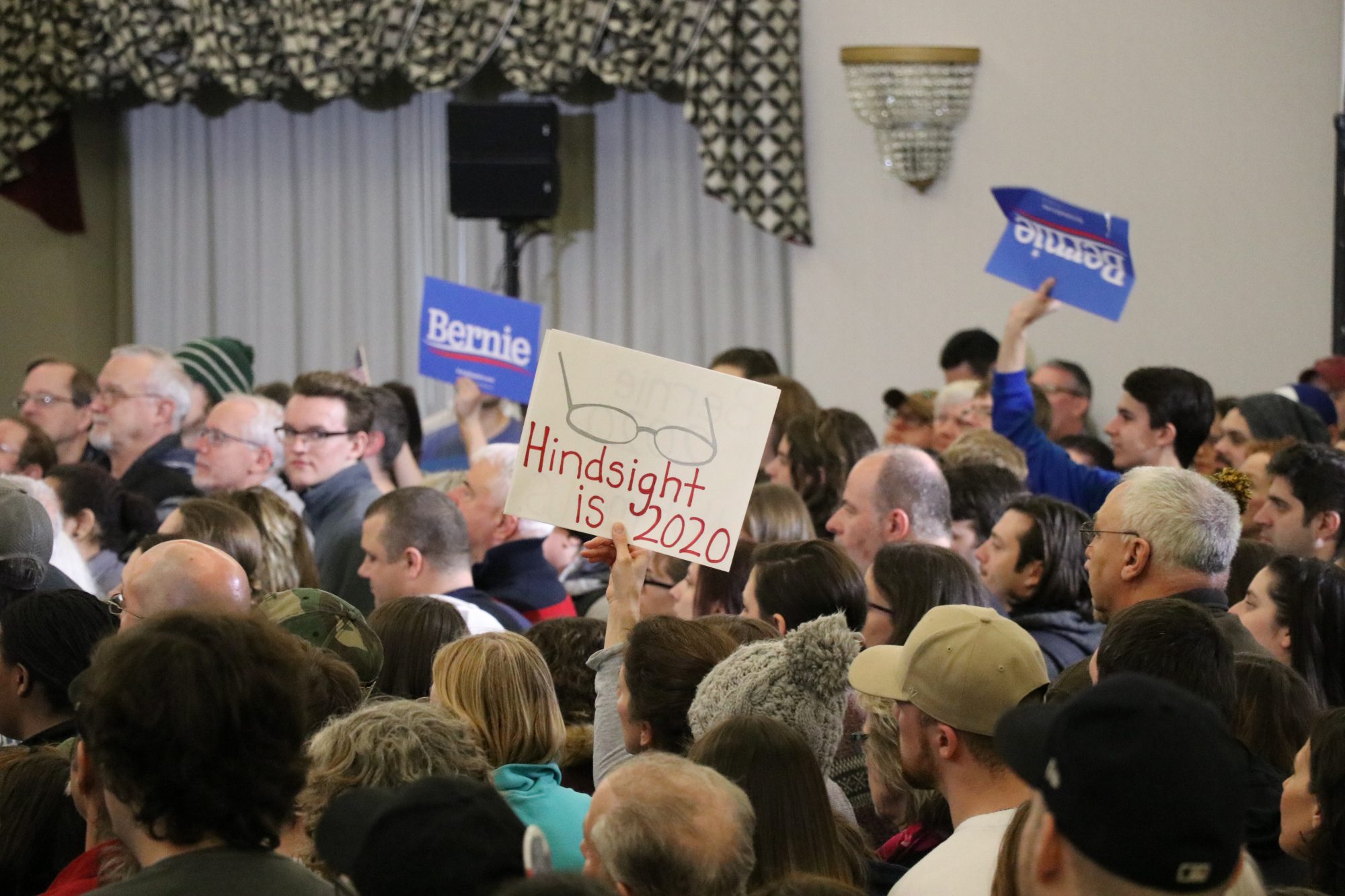 Other supporters said they had no doubt Bernie could appeal to more voters than President Donald Trump.

In a February poll, 22 percent of likely Democratic New Hampshire voters said they would vote for Sanders in the primary. The senator trailed former Vice President Joe Biden, who has not entered the race. Buttigieg was not included in the poll.

Between the youngest and the oldest, Sanders has the upper hand with more name recognition and a larger donor base. If he loses New Hampshire, Smith said, he’s in trouble.

But Smith said even drawing 10 percent of New Hampshire voters would be a win for Buttigieg. He’s already drawn attention from some activists, he said, and winning votes would give him more credibility from the Democratic party and perhaps even a potential position in the next administration.

“He can’t lose,” Smith said,” even if he loses the election.”