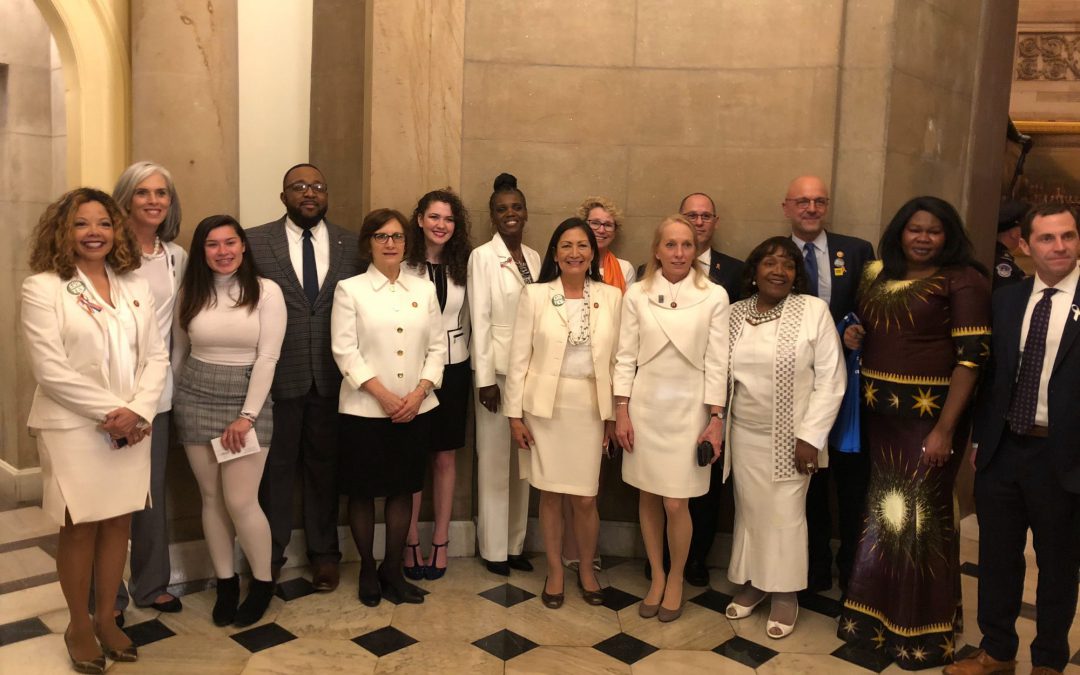 Female lawmakers were wearing white in recognition of suffragettes at the 2019 State of the Union. (Dan Rosenzweig-Ziff/MNS)

WASHINGTON — President Donald Trump got one of his biggest rounds of applause during his State of the Union address Tuesday night when he noted that Congress now has a record-high number of elected women, but it wasn’t lost on the crowd that when the women rose to cheer they were mostly on the Democratic side of the aisle.

“Americans can be proud that we have more women in the workforce than ever before,” Trump said as the women lawmakers rose to clap and celebrate. He then advised them “Don’t sit. You’re going to like this.”

“Exactly one century after the Congress passed the constitutional amendment giving women the right to vote, we also have more women serving in the Congress than at any time before,” he said. There were 117 women elected to Congress in 2018.

Bipartisan chants of “USA! USA!” filled the chamber as both the Democrats and Republicans broke into uproarious applause. Many of the Democratic women wore white and donned pins that read “ERA YES,” in a nod to the women of the suffragette movement.

Trump called his list of priorities “the agenda of the American people” in his second State of the Union address Tuesday, which was delayed a week because of the 35-day government shutdown, which didn’t end until the previous Friday. The address was the first the president has delivered before the new Democratic majority in the House.

The president remained on-script for the duration of the 84-minute speech and touted his administration’s achievements from the past two years. He also laid out several legislative priorities going forward, including a “smart, strategic, see-through steel barrier,” an infrastructure bill and the eradication of HIV and AIDS.

Rep. French Hill, R-Ark., was glad that health care was a topic in the speech, while Sen. John Barrasso, R-Wyo., described the speech as “terrific.”

“We haven’t gotten that right when it comes to protection our citizens with pre-existing conditions, correcting all the problems and costs associated with the ACA,” French said. “I like that he kept an emphasis on that while also tackling the prescription drug process.”

“I wrote down a number of initiatives — defense spending, cancer research, transportation, infrastructure — and never heard anything of how we’re going to pay for them,” he said.

The president also pushed his plan to withdraw U.S. troops from Syria and to reduce drastically the number of troops in Afghanistan.

Among Democrats, reactions were mixed as Trump highlighted his achievements. When Trump lauded the U.S. increase in gas and oil production, Rep. Alexandria Ocasio-Cortez, D-N.Y., who has championed a Green New Deal to address accelerating climate change, remained seated.

Many Democrats applauded Trump’s push for a new infrastructure bill and decision to withdraw troops from Syria and Afghanistan.

“Simply put, walls work and walls save lives,” he said. “So let’s work together, compromise and reach a deal that will truly make America safe.”

However, Rep. Pramila Jayapal, co-chair of the Congressional Progressive Caucus, was not encouraged by the president’s attempt to strike a bipartisan tone.

“I just don’t think he is to be trusted,” she said. “This is not a president who is working for the middle class of this country.”

Rep. Eliot Engel, D-N.Y., said that while parts of Trump’s speech were good, he was too combative at times.

“There should have been more emphasis on the fact that the government was shut down and we all need to work together to bring it back,” he said. “Blaming the Democrats is not going to keep the government open.”