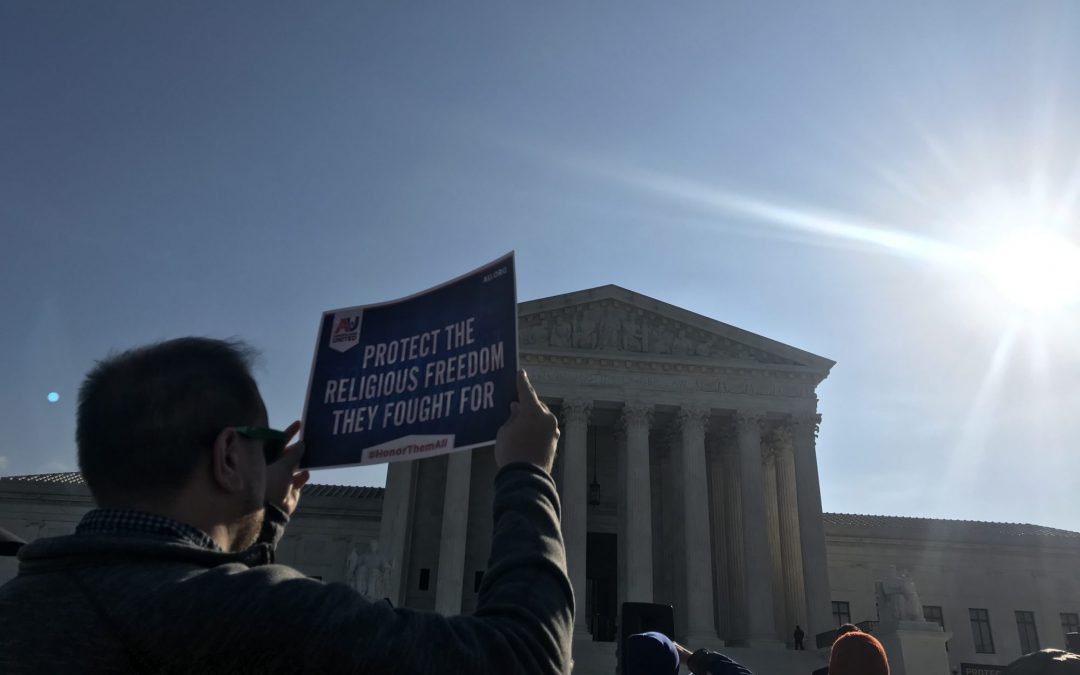 An activist from Americans United for the Separation of Church and State rallies in front of the Supreme Court on Wednesday. The Court heard arguments concerning the constitutionality of a 40-foot cross memorializing those who died in World War I. (Samantha Handler/MNS)

WASHINGTON — The Supreme Court on Wednesday seemed to favor allowing a 40-foot cross commemorating those who died in World War I to remain in a public park, leaning toward a conclusion that it is a secular symbol honoring war dead rather than a violation of the constitutional separation of church and state.

The cross — built in Prince George’s County, Maryland 93 years ago with money from the American Legion and local families — serves as a memorial to 49 World War I veterans. The cross sits on a highway median as part of the Veterans Memorial Park, which is home to other monuments that honor veterans from World War I, World War II, the Korean War and the Vietnam War.

A federal district court ruled the cross and Maryland’s maintenance of it does not violate the First Amendment’s establish clause that prohibits the government from favoring one religion over another because the cross has a secular purpose, does not advance or inhibit religion and does not have an effect on endorsing religion. The U.S. 4th Circuit Court of Appeals reversed that decision, saying the cross does violate the First Amendment. The lawsuit was filed by the American Humanist Association and three Maryland residents.

But cross supporters, which include the Trump administration, said during oral arguments that the memorial has an “independent” value based on its history and the tradition of crosses being used for World War I veterans.

Neal Katyal, the attorney for the American Legion, said the cross has “no words of religious content” and that similar crosses have an “independent, secular” meaning. He said the cross cannot be moved to private land because it may be destroyed in the process and it could, because it’s at a busy intersection, create traffic safety problems.

Justices Ruth Bader Ginsburg and Sonia Sotomayor questioned whether the religious meaning can be stripped from the cross. Ginsburg said the cross is seen as the “pre-eminent” way for Christians to show their devotion and does not take on a dual secular meaning like the Ten Commandments, which represents the rule of law and is featured in a frieze in the Supreme Court chamber.

“We’re told that 30 percent of the U.S. country does not adhere to the Christian faith,” Ginsburg said. “So does that change anything?”

Questions from conservative justices seemed to lean toward leaving the cross in place, but several disputed one American Legion lawyer’s argument that the government can only violate the establishment clause if its practices are “coercive.”

Chief Justice John Roberts said the test “degenerates quickly” because it is hard to apply universally.

Joining the conservative justices in questioning Monica Miller, the attorney for the challengers, Justice Elena Kagan acknowledged that there is a history of the cross being used in World War I memorials, saying it became the “pre-eminent symbol” at the time for memorializing the soldiers.

Justice Samuel Alito questioned Miller about whether the destruction of this cross would mean the “bulldozing of 50 others.” Miller said this cross should be moved to private land, not destroyed. She added that the removal of other crosses would show the government does not favor Christianity over other religions.

Justice Stephen Breyer, one of the Court’s four liberal justices, said it would be problematic if the cross was erected today, but added that “history counts.”

“What about saying, ‘the past is the past?’” Breyer said.

The ruling is due in June.