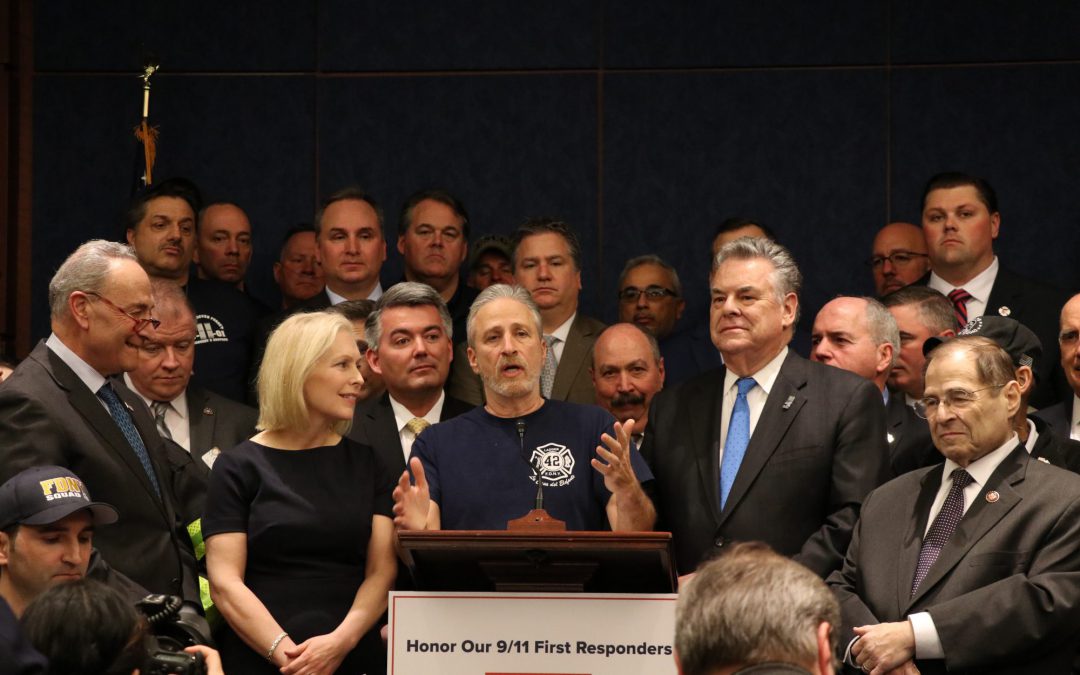 WASHINGTON — He cracked a few jokes at the beginning of his speech, but comedian Jon Stewart appeared on Capitol Hill Monday with a serious message: it’s time to provide permanent help for 9/11 first responders who have become ill or died after exposure to toxins at Ground Zero.

The Victims Compensation Fund, opened in 2011, provides compensation for these responders, but the program is set to expire in 2020. It has paid out $5 billion of its $7.3 billion cap, and last week the fund announced it would be cutting its payouts in half for some and for others by as much as 70 percent because of a surge in applications.

Stewart joined with Democrats and Republicans in Congress to announce the introduction of a bill set to extend the fund through 2090 and to eliminate the funding cap.

“This is nonsense,” he said, referring to the fact that this money had not already been appropriated. “You guys know it. I know it.”

New York’s two senators, Senate Minority Leader Chuck Schumer and 2020 Democratic presidential candidate Kirsten Gillibrand, introduced the bill. Lawmakers vowed to garner bipartisan support for the bill, with Rep. Carolyn Maloney, D-N.Y., saying it already has 85 cosponsors in the House of Representatives. She said they hope to have 150 by the end of the week.

Stewart, famous for his 16-year tenure on “The Daily Show with Jon Stewart,” urged members of the media to continue covering the stories of first responders who have fallen ill due to unsafe air at Ground Zero. Stewart has been an outspoken supporter of 9/11 first responders.

“These are human beings, this isn’t just rhetoric,” Stewart said. “The program works exactly like it’s supposed to. It’s Congress’ job to fund it properly and let these people live in peace.”

Stewart commended the Department of Justice for managing the fund efficiently, but said it must be allowed to run unencumbered and without expiration.

Stewart was joined by first responders and advocates who said they hoped this would be the last time they had to come to Washington to fight for medical care funding.

Edward A. Kelly, the general secretary treasurer of the International Association of Firefighters, said 9/11 first responders knew there was a risk to their health in being at Ground Zero, but felt compelled to help.

“We knew what the risk was,” he said. “We weren’t blinded to the fact that you’d spit out dust at the end of the day, that it was a good possibility that this would come catch up with you at some point…we were all Americans on that pile.”