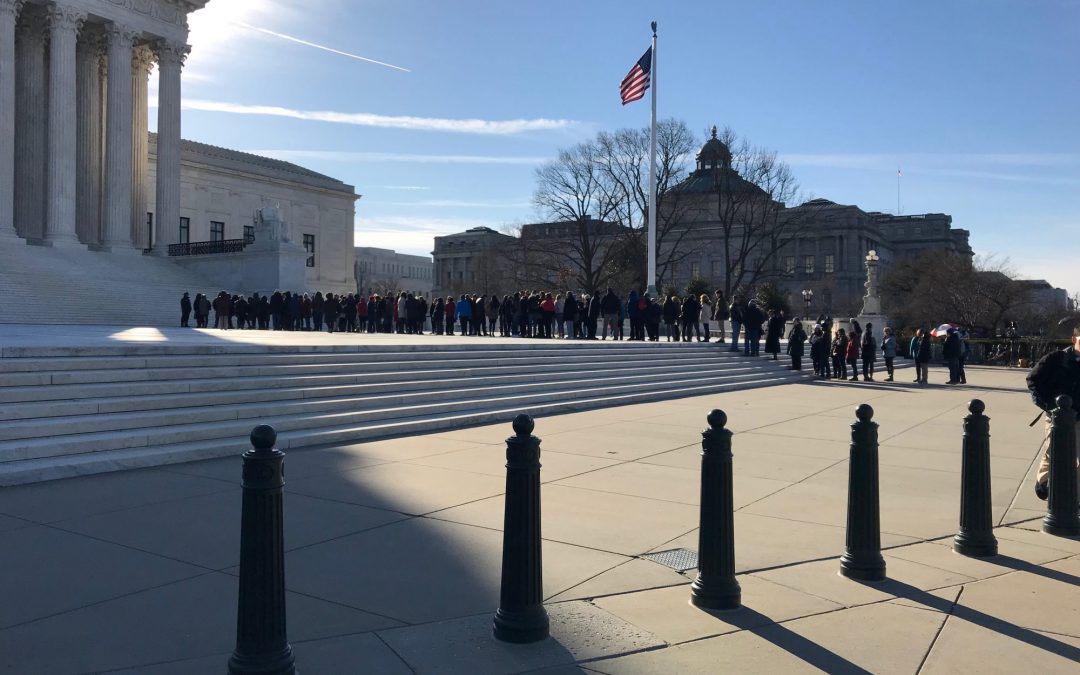 The public lines up outside of the Supreme Court for a morning hearing on U.S. patent law. Justice Ruth Bader Ginsburg returned to hear arguments for the first time since early January. (Gabrielle Bienasz/MNS)

WASHINGTON–Justice Ruth Bader Ginsburg was back on the bench Tuesday for the first time since early January after undergoing surgery in late December to remove cancerous growths from her left lung, but she was quieter than usual.

Ginsburg spoke six times during Tuesday’s oral arguments in a case revolving on whether the U.S. Postal Service is a “person” and thus can use additional avenues to contest patents. Return Mail Inc. argued the government does not fall under the definition of a “person” and so cannot dispute its patent on a system to return mail to senders when it is undeliverable.

In the last hearing that she attended in-person in early December, Ginsburg spoke 33 times. Though a 2018 analysis in the Notre Dame Law Review found that justices have been speaking more often in the last 20 years, Ginsburg generally is an active questioner, according to a 2017 analysis by Empirical SCOTUS.

Ginsburg, who was at Supreme Court arguments through multiple illnesses and the death of her husband, worked from home while recovering from surgery.

During Tuesday’s arguments, Beth S. Brinkmann, arguing for Return Mail, asserted that a 2011 law relies implicitly on the Dictionary Act, which does not include the government under “person.”

“Does anybody really think Congress thinks about this as a default and legislates against it?” Justice Elena Kagan asked.

Justice Samuel Alito got a laugh when he said that to debate the intentions of Congress on whether or not a federal agency could use the 2011 patent reform bill’s review channels was to “indulge the possible fiction that Congress gave a second of thought to the issue that is before us.”

Postal Service lawyer Malcolm L. Stewart argued that, because federal agencies can apply for patents, they should also be allowed to use the 2011 law’s petitions to dispute patents they sees as invalid or bad for innovation.

“Everybody understands that the same substantive and procedural provisions that govern anyone else’s patent application will apply when a federal agency applies for a patent,” he said.

“I was hoping you’d have an argument from a particular statute rather than just saying, ‘This applies to everyone else so there’s no reason it shouldn’t apply to us,’” he said.

The Electronic Frontier Foundation, which, among other things, fights the right to innovate digitally and R Street Institute, a conservative think tank, filed briefs in support of USPS.

The government has only been involved in 30 patent review petitions–less than 1 percent of the total filed–since the review processes were created.