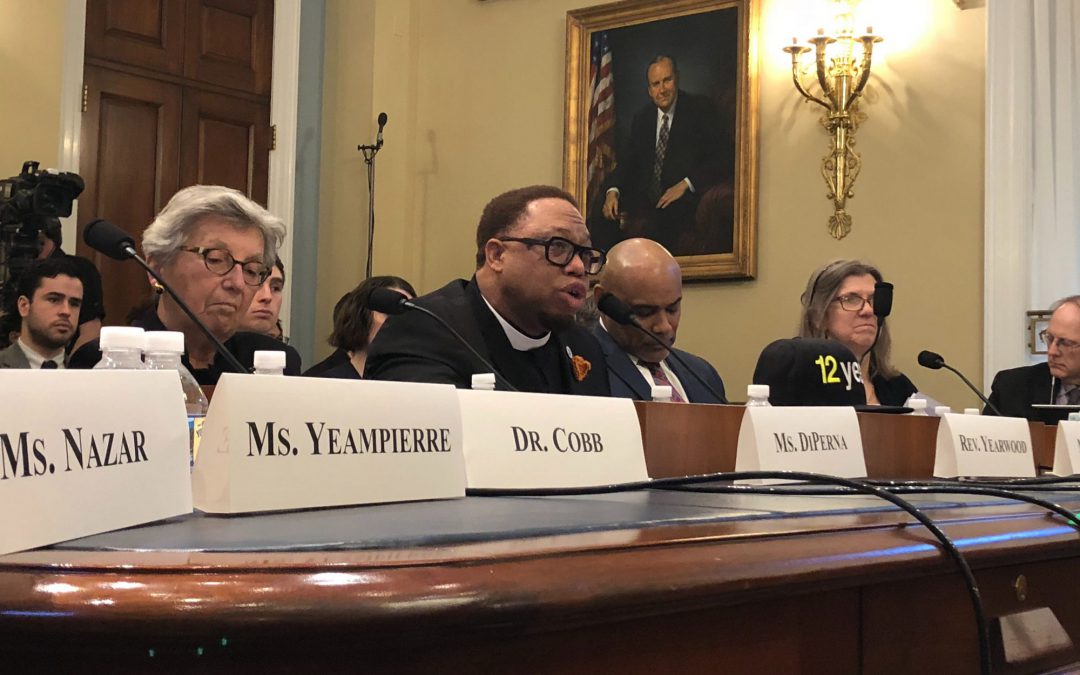 Rev. Yearwood of the Hip Hop Caucus urged the committee to find the courage to be a global leader in fighting climate change. (Dan Rosenzweig-Ziff/MNS)

“Climate change is an existential threat,” said Rep. Joe Neguse, D-Colo., who plans to co-sponsor the Green New Deal, a progressive policy to combat climate change that is expected to be jointly introduced as early as this week.

House Republicans aimed to refute federal jurisdiction and urgency a day after President Trump lauded oil and gas production in his State of the Union address.

“Climate change is real,” Chairman Raul Grijalva, D-Ariz., said. “The emissions we produce from fossil fuels are making it worse.”

Trump, who has publicly questioned the effects of climate change, did not mention the issue in his address.

“We need our federal partners to step up on this issue and make the United States a leader in the world again on climate change,” said Cooper, a leader of the governor-led U.S. Climate Alliance.

Baker, a moderate Republican in a liberal state that has taken action on climate change, especially in wind energy, argued that the federal government must support local government by establishing a clear bipartisan vision for climate policy and incorporating climate science into planning and legislating.

“On a number of issues around mitigation, adaptation and resiliency, there’s a lot of common ground there,” said Baker, disagreeing with members of his own party who deny the human impact on climate change.

House Republicans, who entered their first hearing on the Natural Resources Committee as the minority, questioned the human role in climate change and GND.

Rep. Louie Gohmert, R-Texas, argued a lack of human impact in the ice caps melting on Mars and a natural disaster that wiped out dinosaurs should be evidence that humans have played no role in climate change on this planet.

“It sounds too much like a Soviet 5 year-plan, which is simply not going to work,” Rep. Doug Lamborn, R-Colo. said of the GND. “I think I can understand if someone who doesn’t have a life experience and they’re proposing something that is extremely unrealistic – impossible. But what I don’t understand is adults and grown ups and older and more mature [leaders] who are also advocating something that is impossible.”

Rep. Sam Graves, R-Mo., who has earned a zero in 2017 from the League of Conservation Voters’ congressional scorecard, argued against federal interference because he said that states have different industry needs and energy resources.

But for the Democrats on the committee and a majority of the witnesses, there is a clear relationship between humans and climate change.

“Climate change has forced us to live in a new normal, in which fires and floods, droughts and hurricanes break our communities and natural heritage,” said Rep. Deb Haaland, D-Ariz. “It’s now time for us to act.”

The hearing is part of a month-long effort by the Democrats leading the committee to draw attention to climate change.