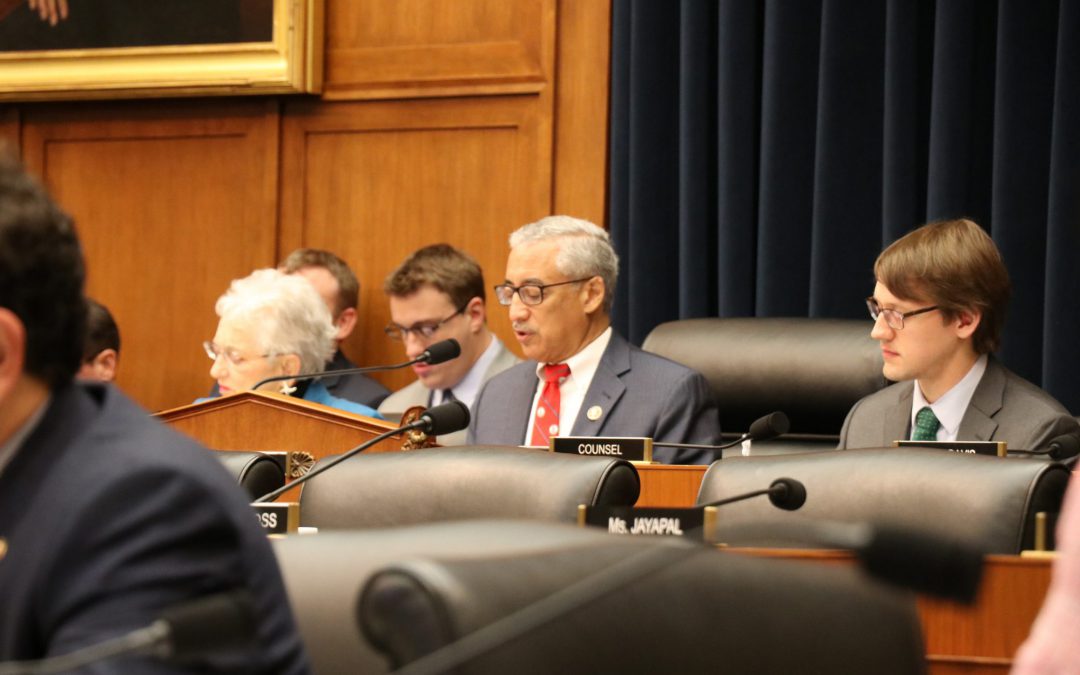 The House Committee on Education and Labor meets to discuss how threats to the Affordable Care Act could affect workers with pre-existing conditions. (Samantha Handler/MNS)

WASHINGTON — Chad Riedy got really sick for the first time at 26. He has cystic fibrosis and after returning from his honeymoon, realized he was having trouble breathing and performing normal activities. He was admitted to the hospital for 7 days, and though his healthcare was covered by his employer-based insurance, he received “constant reminders” about almost hitting his lifetime annual caps.

The next time Riedy got really sick, in 2014, his doctors had found his lung function declined dramatically over a period of 8 months. Riedy could not go in to work, struggled to carry his two children and began conversations about needing a lung transplant to save his life. This time, however, he was covered by the Affordable Care Act and did not worry about hitting any lifetime caps.

Lawmakers were at odds about the future of healthcare legislation at Wednesday’s House Education and Labor Committee hearing where Riedy testified. Democrats and Republicans disagreed about how rolling back the Affordable Care Act would affect workers with pre-existing conditions, like Riedy.

The debate centered around a recent district court ruling in Texas that struck down the entire ACA as unconstitutional, based on its mandate requiring people to buy health insurance.

Democrats claimed the result would be “catastrophic” if the ruling prevails. Some of the protections rolled back would include the ban on lifetime annual caps that once worried Reidy.

By 2036 up to 32 million people could lose their insurance if the ACA is overturned without a replacement, said Sabrina Corlette, a research professor at the Georgetown Health Policy Institute.

The decision would also eliminate the protections that allow people to access preventative care — including vaccines, contraception and early cancer screenings — without paying out-of-pocket, Corlette said.

Chairman Bobby Scott, D-Va., said though some Republicans have now voiced support for the protections the ACA provides, most did not vote Jan. 9 to defend the ACA in the Texas case.

“We must all commit — both with our words and our actions — to maintaining the lifesaving consumer protections enacted in the ACA,“ Scott said.

In his opening statement, Scott said the ACA has been a success in reducing the number of uninsured Americans, dropping from 16.7 percent in 2009 to 8.8 percent in 2017.

He argued the ACA has strengthened the quality of coverage by preventing insurers from excluding people with pre-existing conditions and from putting annual or lifetime caps on coverage. Though, Scott said the Trump administration’s efforts to undermine the ACA would make it more difficult for “older, sicker” workers to get health care.

Ranking member Virginia Foxx, R-N.C., said it is “perplexing” why the hearing has focused on threats to workers, when the “strong economy” has increased the number of workers with employer-based insurance.

Republicans emphasized that legislation should help employers provide coverage, saying the ACA’s premiums are too high and do not give people enough options for their care.

Foxx said the ACA initially “decimated” options for employers to provide competitive packages and premium costs increased. She added that it’s been the eight years of congressional Republican leadership and Trump’s actions in the White House that have caused wage and job growth, resulting in 2.6 million people gaining insurance through their employers.

Republicans on the committee, Foxx said, will prioritize legislative solutions to “skyrocketing” premiums, prescription drug costs, the lack of cost transparency and “the looming threat of a single-payer system.”

“These are the factors that pose the real threat to Americans,” Foxx said.

Rep. Tim Walberg, R-Mich., said the Republicans proposed and voted for the American Healthcare Act because the ACA did not work for some people. He said the committee should work to find ways to help small businesses offer coverage to their employees at lower costs than the ACA.

Gracie-Marie Turner, president of the public policy research center called the Galen Institute, said employers play a central role in the health insurance market and provided preventative services “long before the ACA.” She said employers and employees both want the best value for their healthcare, and some said they preferred their pre-ACA coverage because it was more affordable.

“Instead of forcing Americans off their plans that they like or…worked hard for,” Walberg said, “we should explore ways to strengthen our employer sponsored system, reduce costs so more businesses can offer these good benefits to their employees.

Rep. Bradley Byrne, R-Ala., said because of previous legislation under Medicare, Medicaid and the Health Insurance Portability and Accountability Act of 1996, most people with pre-existing conditions are protected and that he has talked to people in his district who lost coverage because they could no longer afford their plans after the ACA went into effect.

Turner said the Texas ruling would not affect the protections in place before the ACA, which she said is 85 percent of people with pre-existing conditions.

Reidy is hoping he can continue to focus on his health without worrying about the cost of his care.

“For people battling very chronic diseases,” Riedy said, “the policies we are discussing today are a matter of life and death.”